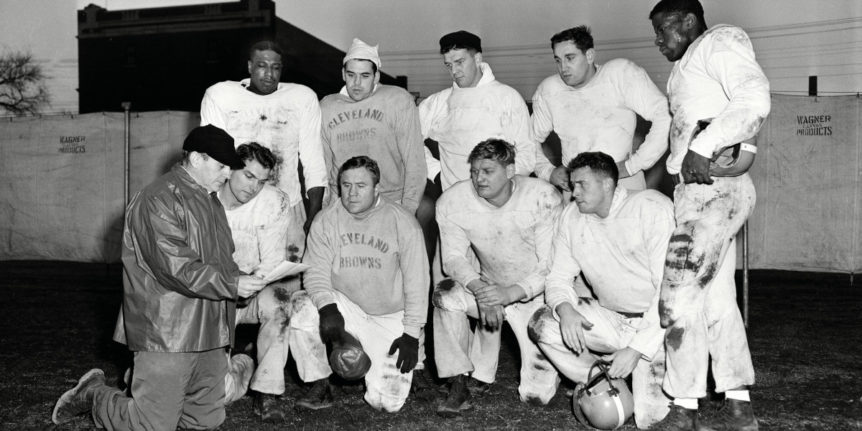 For the many players who received their summons while stationed around the world on military bases, the standards and routine were familiar.

Otto Graham had been in Carolina when his package arrived, Lou ‘The Toe’ Groza in the Philippine island of Mindoro and Dante Lavelli and Frank Gatski in Europe. The offers were scarcely believable: a new pro-football team in Cleveland was starting, and each man would be paid over the duration of the war before reporting to training camp at Bowling Green University’s campus.

Which is where, in the summer of 1946, the quartet of future Hall of Famers sat – holding binders that would soon contain their own notes and diagrams of every play installed over the coming weeks – and listened intently as their latest sergeant major spelled out the exacting standards. “I will call in notebooks without warning,” he advised his team. “They will be graded. A sloppy notebook means a sloppy player. Star or rookie, you will be gone.”

If the words alone didn’t spark realisation of what was to come, the hypnotic routine did. Each day of camp saw coaches introduce a running play in the morning and passing one in the afternoon. Prior to that point, every individual element of that specific design was drilled.

Overseeing it all was the former English teacher from Severn Prep School in Maryland, who took over as football coach when the incumbent fell ill and never looked back. He went 16-1-1, moved to Massillon in his home state of Ohio and turned the Tigers into a national powerhouse that accrued a 80-8-2 record and played his last 10 games in front of a combined 180,000 supporters. From there, he headed to Ohio State, at the suggestion of rival prep coaches hoping for a chance to win again, and led the Buckeyes to a National Championship.

And now he stood at the helm of the Cleveland Browns, beginning a career in the professional ranks that would see Bill Belichick describe him as the ‘father of professional football’. “Fifty years later,” the New England Patriots head coach told NFL Films, “we’re all basically just doing the same thing.”

“His genius was unleashed upon the pro ranks just after World War II, when the All-America Football Conference began in earnest and simultaneously ushered in one of the most dominant dynasties in pro football history.”

To say Brown redefined the role of head coach would perhaps be underselling it, for – in reality – he defined it completely.

That opening training camp could not have been in starker contrast to the glorified summer camps undertaken by other professional clubs, and that was one of many times Brown moved the envelope over his career. As well as being the original implementer of individual playbooks and extensive coaching staffs, he boasted an array of other firsts: calling plays from the sideline, using messenger guards prior to introducing the first radio earpiece for Graham (which was banned until it became commonplace); utilising the 40- rather than 100-yard dash to determine speed, believing it a better gauge for football; introducing game film as a coaching tool; and statistically analysing his and opposing teams’ tendencies, a task undertaken by the staff he, unlike other coaches of the day, appointed year-round.

Brown also invented the pocket in which a quarterback throws by having his tackles block outwards rather than in a straight line, single-bar facemask, draw play, zone defense and option routes. “There’s nobody I have more respect for,” added Belichick.

His genius was unleashed upon the pro ranks just after World War II, when the All-America Football Conference began in earnest and simultaneously ushered in one of the most dominant dynasties in pro football history. Brown’s men won each campaign of four during the AAFC’s brief existence, before redefining an NFL that looked down upon exploits they wrote off as being a product of poor competition.

In doing so, each detractor underestimated Brown and his outstanding passer Graham, as well as the rest of the coach’s handpicked roster. Alongside brilliant kicker/offensive lineman Groza, end Lavelli and centre Frank Gatski stood black stars Marion Motley and Bill Willis – who also punched their tickets to Canton.

That those players eventually donned gold jackets was thanks to exploits in the NFL, where they immediately proved their worth by dominating the defending champion Philadelphia Eagles in Week 1 en route to their first a title of their own. That was sealed in the first of six successive NFL Championship Game appearances, with further victories following in 1954 and ’55.

For the next decade, Brown got his wish.

THE EAGLE HAS LANDED

The Cleveland Browns’ entry to the NFL, alongside fellow AAFC clubs Baltimore and San Francisco, was met with widespread ridicule around the older league. Their expectation was that the two-time champion Philadelphia Eagles would immediately put Paul Brown’s team in their place when the teams met to open the 1950 campaign.

In fact, the opposite happened. NFL commissioner Bert Bell was declaring the Browns “the best-coached football team I have ever seen” after their 35-10 victory, which didn’t best please the Eagles’ leading man. Greasy Neale, an outstanding operator in his own right, had claimed pregame Brown “may as well be a basketball coach because all he does is put the ball in the air” and doubled down afterwards. Unknowingly, he set up the ultimate ignominy because, when the teams met again in Week 12, the Browns would triumph 13-7 without attempting a pass.

A GRAHAM FOR ANY GAME

Look up the word ‘winner’ and you should probably just see a picture of Otto Graham. Across 10 seasons in Cleveland in the AAFC and NFL, the quarterback reached the championship game every year and won seven. Moreover, in the brief period between World War II, the multi-talented Brown – whose excellence spanned everything from sport to the French horn – joined the American Basketball League’s Rochester Royals. The result? Another championship in what would become the National Basketball Association. 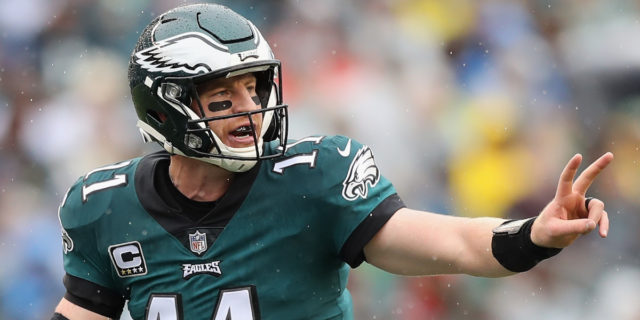 This article originally appeared in Issue XXII of Gridiron magazine – for individual editions or subscriptions, click HERE The entourag... 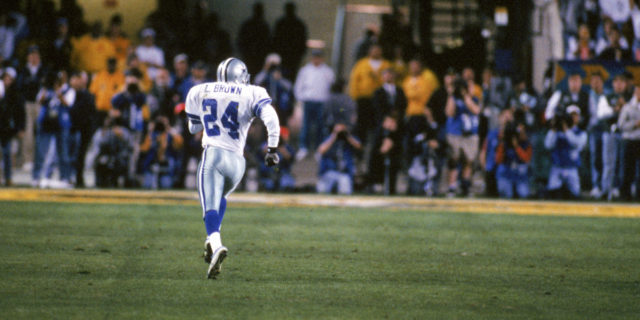 This article originally appeared in Issue XIII of Gridiron magazine, back in 2015 – for individual editions or subscriptions, click HER... 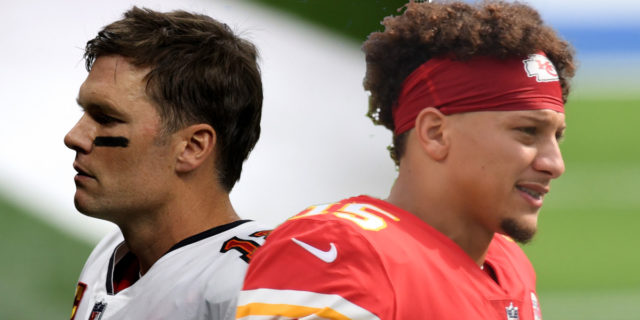 This article originally appeared in Issue V of Gridiron magazine — our first ever print edition — way back in 2014. For individual ed... 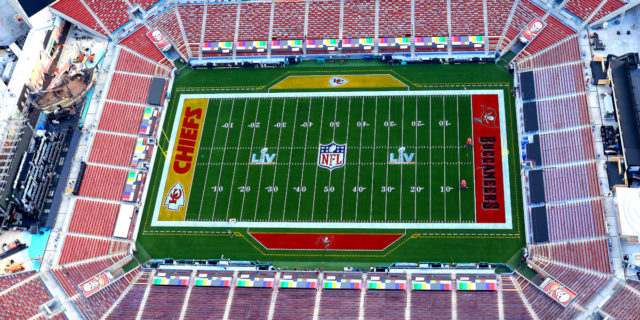 This article originally appeared in Issue XXXVI of Gridiron magazine, back in 2017 – for individual editions or subscriptions, click HE... 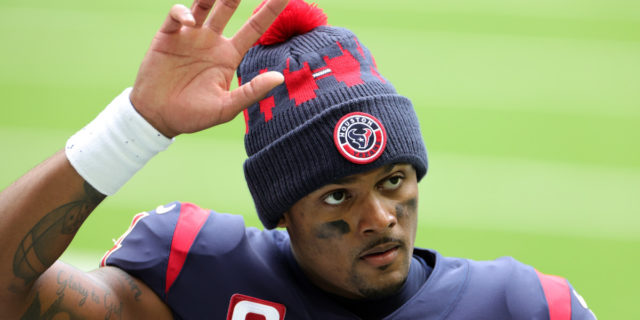 Watson in search of new homes