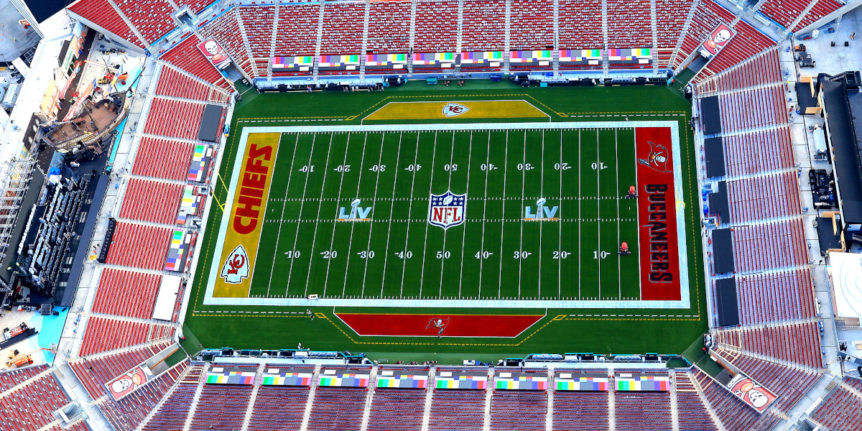 This article originally appeared in Issue XXXVI of Gridiron magazine, back in 2017 – for individual editions or subscriptions, click HERE

The Los Angeles Coliseum was the site of the first Super Bowl. Except it wasn’t called the Super Bowl: Pete Rozelle, a marketing genius in many ways but not this time, named it the AFL-NFL World Championship Game. It was not hyped to anything like the extent you’d recognise today. The venue was chosen a month before the game; Rozelle had once been the Rams’ GM and thus knew it well. Tickets were priced high. In fact, the media ranted about the exorbitant $12 price tag. Los Angeles has never been a pro football town: USC and UCLA are still the big draws and, in the end, the crowd of 62,000 was somewhat lost in the vast Coliseum, which in those days sat 94,000.

The game was shown on both CBS (the NFL’s home) and NBC (the AFL’s, after starting on ABC). NBC won the ratings battle, with the total being 41.1 and an estimated viewership of 51million. Those numbers might have been slightly boosted ​except for the advice of local media in L.A. for Angelenos to avoid paying 12 bucks and beat the TV blackout by watching on stations emanating from San Diego, Bakersfield or other nearby cities.

The pregame show featured the college marching bands from Michigan and Arizona, along with the Ramette cheerleaders and the Anaheim High School drill team. At halftime, trumpeter Al Hirt entertained along with the Arizona and Grambling College bands. Two of Bell Lab’s rocket men flew into the stadium, in an eerie prefiguring of the 1984 Olympic opening ceremony at the same venue.

It was all very much like one of the college bowl games, and the travelling crowd was pretty much restricted to fans from Green Bay and Kansas City. There wasn’t the massive week-long build-up to the game, nor the attendant bread and circuses that make Super Bowls something cities and their NFL owners compete for, as well as a prize dangled by the league in return for civic cooperation in building new stadia in those cities.

Super Bowls are now an attraction for football tourists from all over the world and, because of that, here are my favourite destinations. I’ve taken into account the welcome of the city and its facilities as well as the venue itself.

10. ARIZONA
The game first went to Arizona with Super Bowl XXX, at Sun Devil Stadium in Tempe, where the Cowboys beat Neil O’Donnell and the Steelers. It came back for XLII at the University of Phoenix Stadium in Glendale (note that U of P is a mail-order college with no campus, nor football team) and the biggest upset since Super Bowl III as the Giants beat the undefeated Pats. I was lucky enough to be at that one for BBC; when the Pats got their stunning win in XLIX over Seattle, I was back in London with Nat Coombs and Osi Umenyiora for Channel 4.

9. NEW YORK/NEW JERSEY
The build-up was in Manhattan; the game was in New Jersey and the NFL rolled the dice on an outdoor stadium in the north in February. They won with XLVIII, as the weather was unseasonably balmy. The game had perfect conditions, but a snow storm started falling literally by the time we got back to Manhattan. Transport across the Hudson River may mitigate against a return, but not as much as the odds against dodging bad weather a second time. Note, too, the odds double for a NY team playing the Super Bowl at home. But putting the NFL Experience in Times Square (10 minutes’ walk from the league offices) was a dream come true for marketing and media and, for us old-school guys, playing in real weather was perfect. Too bad they couldn’t get as lucky with the game itself.

8. MINNESOTA
If I hadn’t visited the Twin Cities this past summer I wouldn’t be so enthusiastic, and perversely I would have loved to see the league try to roll the dice again with a northern outdoor venue. But the new stadium in Minneapolis has a roof and those lucky enough to be staying in downtown hotels will be able to walk via a skyline that keeps you indoors for the duration. It’s a welcoming, friendly city, with a reasonable transport system, and it will be interesting to see how the tourists deal with the potential cold while enjoying the cities. The people who live there are used to it and deal with it fine.

“It lacks the glitz of Miami, but … Super Bowl XLIII, Pittsburgh’s win over Arizona, remains arguably the greatest ever.”

7. HOUSTON
One of those cities where everyone seems to live in the suburbs, which is good for staging the NFL Experience. But the stadium is easily accessible, and I found the amazing Menil Collection, in the shadow of downtown, where the Mark Rothko Chapel and the Cy Twombly Gallery provided an oasis of calm away from the hype. Yes, I understand not everyone is seeking calm when they travel to a Super Bowl. Super Bowl VIII was at Rice Stadium (Miami’s second consecutive win); it returned to Houston for XXXVIII and LI, with the Pats prevailing over two NFC South teams, Carolina and Atlanta. Houston seems firmly in the rotation, which is good because locals say February is about the only good time of the year to avoid the sticky heat that makes the city so uncomfortable!

6. MIAMI/ SOUTH FLORIDA
It’s been through each venue with aplomb, and everyone in cold climates loves hitting Miami in February. The high points of South Florida Super Bowls were the two Steelers-Cowboys match-ups in X and XIII, and maybe the Saints’ onside kick in XLIV; the low point was probably Falcons safety Eugene Robinson being busted by Miami police while seeking companionship on Saturday night before the game.

5. TAMPA BAY
It lacks the glitz of Miami, but there’s lots to recommend the area, and Raymond James Stadium is in the city with relatively easy access. Ybor City is their equivalent of New Orleans’ French Quarter, while in between the car dealerships on Dale Mabry Boulevard are centres of Tampa’s cultural excellence, or so I am told. St. Petersburg is fun to walk around, and of course it’s beach-worthy. Super Bowl XLIII, Pittsburgh’s win over Arizona, remains arguably the greatest ever; our BBC position was directly above Santonio Holmes as he made the winning catch.

“Now that the Chargers will be the Rams’ tenants in Los Angeles, if you were going to consider a permanent neutral site, San Diego would rank up there with Orlando.”

4. SAN DIEGO
The best climate, most relaxed, and most compact of the great Super Bowl cities. It loses points for Jack Murphy Stadium or whatever it’s called now, both for its lack of charm and difficulty of access. Now that the Chargers will be the Rams’ tenants in Los Angeles, if you were going to consider a permanent neutral site, San Diego would rank up there with Orlando. Two of the city’s three games were routs: Gruden’s Bucs over Gruden’s former Raiders (XXXVII) and Washington over Denver (XXII). I haven’t been to many Super Bowls; in 1998, when Denver beat Green Bay 31-24, I was in Channel 5’s London studio with Seal and the great barefoot kicker Rob Hart while Mark ‘Worldwide’ Webster anchored onsite. I’ve never forgiven him.

3. SAN FRANCISCO
Super Bowl XIX almost became the first where a team played at home; the Niners, who beat Miami, played at Candlestick Park then. Stanford’s stadium in Palo Alto isn’t that far out of town; a lot closer than Santa Clara. For Super Bowl L, I stayed at San Jose airport, which is kind of like staying at Gatwick for an FA Cup final played in Brighton. San Francisco is one of America’s great cities, and the week of NFL festivities in the city itself was a huge success; only the 45-mile trek to the game itself stops SF from No. 2.

2. LOS ANGELES
The host of the first one ought still to be the Big Daddy, but there hasn’t been a Super Bowl there since XXVII in 1993. That was the fifth at the Rose Bowl, which boasts the five biggest attendances for Super Bowls, four over 100,000. L.A. gets a bad rap as a tourist destination. Yes, you have to drive, which can be frustrating, but there is a lot for visitors besides the weather and beaches. I spent a month in the Coliseum during the 1984 Olympics and had a helluva time, but the game hasn’t been there since Super Bowl VII. It moved to Pasadena four years after that. The one time I attended the college Rose Bowl, it was tremendous. I prefer the latter’s old-fashioned college atmosphere and sight-lines, although Pasadena, in the northern suburbs, is a hike from L.A. proper. The new stadium ought to have convenience as a selling point, which ought to put LA back into the rotation. But the new stadium will double the chances of a team playing the game at home.

1. NEW ORLEANS
Bien sur, cher’! Laissez les bons temps rouler! Although I like old-fashioned stadia, like Tulane’s, and dislike indoor NFL, the Super Dome is easily accessible from downtown and there’s beaucoup of hotel capacity (though I stayed in Hanrahan the year the lights went out). The French Quarter can be a tourist trap, but it gives thousands a chance to wear beads and parade through its streets. All around the city are some of the best bars, restaurants and especially music venues in America. And there’s a great historical context to games set in New Orleans: when the AFL players refused to play their All-Star game in the city because of the racial discrimination they had encountered, one of the things the NFL insisted on when the Saints were born was visible progress in equality, a public step in the right direction.

THE BEST THAT WON’T HOST THE BEST?

Green Bay, of course! Even if they committed sacrilege and put a roof over Lambeau, the city is too small and the infrastructure too limited to be able to stage a Super Bowl, though the atmosphere in Lambeau for the Big Game, with the echoes of the NFL’s early days, Lombardi’s first Super Bowl wins, and all that history would probably reduce Iron Mike to tears.

ON THE CUSP?
I ranked Arizona ahead of Atlanta because its games were better, as are its suburbs. Even though Atlanta’s stadium is downtown, that downtown is deserted after five – which, paradoxically, makes the NFL Experience easier to stage. You’ll see the new stadium for SB LIII, but skip the Mall of the Confederacy feel of Buckhead and visit the Martin Luther King Jr. National Historical Site instead.

This article originally appeared in Issue XXXVI of Gridiron magazine, back in 2017 – for individual editions or subscriptions, click HERE