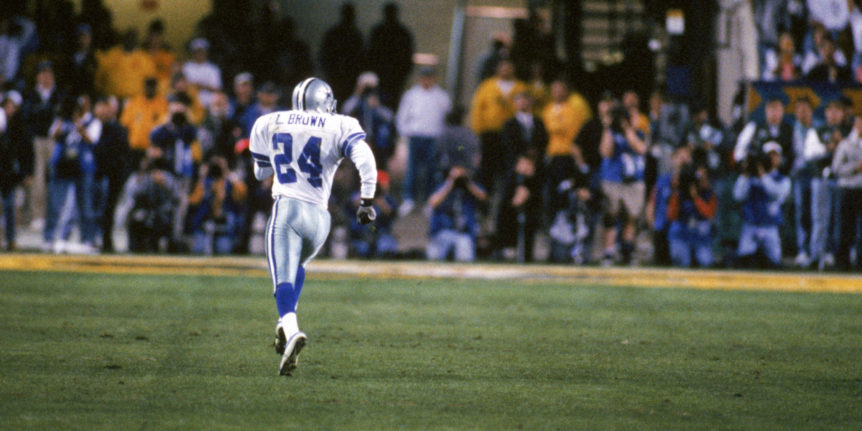 This article originally appeared in Issue XIII of Gridiron magazine, back in 2015 – for individual editions or subscriptions, click HERE

Quick now, who was the Most Valuable Player of Super Bowl XLVIII? If the name Malcolm Smith didn’t pop off the tip of your tongue, you might be forgiven — for two different reasons. The first is that Smith is not a well-known player, but a classic ‘right-place right-time’ kind of guy who rose to the occasion, even if it didn’t make him famous: he still doesn’t start for Seattle. The other reason may be you don’t believe he was the game’s most valuable player, the guy who did the most to help his team to victory.

I thought the MVP was Kam Chancellor, whose presence as a fourth linebacker as well as a safety keyed what was a Super Bowl won by defense. My next choice might have been Cliff Avril, whose pass rush caused the bad throw that Smith intercepted.

Then consider the difference between the game’s ‘best’ player and its ‘most valuable’. MVPs usually go to the best offensive player, when a defender might be more deserving. And sometimes, as it’s a team game, there is no obvious choice, nor an obvious alternative. With that in mind, I present the 10 worst Super Bowl MVPs.

“The hungover Max McGee caught seven passes for 138 yards and two scores, the first of which was a tremendous grab of a ball thrown well behind him.”

Starr was brilliantly efficient as the Packers ground down the upstart Chiefs, but the hungover Max McGee – who replaced an injured Boyd Dowler in the first quarter – caught seven passes for 138 yards and two scores, the first of which was a tremendous grab of a ball thrown well behind him. McGee had caught only four passes all year! Starr was MVP of Super Bowl II as well, but with a much less impressive game.

9. Jake Scott (Miami Dolphins)
Super Bowl VII
Scott had two interceptions, one which he returned 55 yards and another that stopped Washington in the end zone in the fourth quarter, but you could go with Larry Csonka, who won the following year, or I can see an argument for other Dolphin defenders Nick Buoniconti or Manny Fernandez.

8. Jim Plunkett (Oakland Raiders)
Super Bowl XV
It’s hard to ignore Plunkett’s three touchdown passes, but linebacker Rod Martin had three interceptions and recovered a fumble on a kick-off return. Plunkett was simply too good a story not to get the MVP award.

7. Marcus Allen (Los Angeles Raiders)
Super Bowl XVIII
It may sound like sacrilege since Allen broke John Riggins’ year-old rushing record and his 74-yard touchdown run remains one of the great plays of all-time. But that came in the third quarter when the Oakland defense had already put Washington away, and Matt Millen at linebacker had produced maybe the best performance until Ray Lewis was MVP in Super Bowl XXXV.

“The Patriots’ win over the Rams was keyed by great team defense, centred around Mike Vrabel. But how about Adam Vinatieri, for kicking the 48-yard walk-off field goal?”

6. Fred Biletnikoff (Oakland Raiders)
Super Bowl XI
Again, it’s hard to give an award to just part of a line, but Clarence Davis ran 16 times and gained 137 yards behind Art Shell and Gene Upshaw, blocking Alan Page and Jim Marshall of the Vikings’ ‘Purple People Eaters’. Biletnikoff’s four catches were clutch, and led to three scores, but Shell and Upshaw were dominant.

5. Tom Brady (New England Patriots)
Super Bowl XXXVI
Brady didn’t have a great game but delivered in the clutch. The Patriots’ win over the Rams was keyed by great team defense, centred around Mike Vrabel. But how about Adam Vinatieri, for kicking the 48-yard walk-off field goal?

4. Randy White and Harvey Martin (Dallas Cowboys)
Super Bowl XII
It’s not that White and Martin were undeserving, it’s just… why give two guys from the defensive line the award and not include ‘Too Tall’ Jones and Jethro Pugh? Jones, in particular, played a very noticeable game.

3. Chuck Howley (Dallas Cowboys)
Super Bowl V
Howley did prevent a touchdown with one of his two interceptions (two picks seems to be the MVP voters’ favourite stat!), but he is the only MVP from a losing team because nobody else stands out in what was a dire game. John Mackey made the big play, on a fluke, but caught only one other pass all day.

“This one defines the MVP dilemma, where quarterbacks, the key players in almost every football team, have the inside track.”

2. Joe Namath (New York Jets)
Super Bowl III
This one defines the MVP dilemma, where quarterbacks, the key players in almost every football team, have the inside track. Namath’s ‘guarantee’ of a win and overall confidence and leadership may have galvanised his team behind him, but his 17-of-28 for 206 passing yards was merely efficient, while full-back Matt Snell’s 30 carries for 121 yards and the game’s only TD, as well as four catches for 40 more, allowed the Jets to dominate possession and get the win.

This article originally appeared in Issue XIII of Gridiron magazine, back in 2015 – for individual editions or subscriptions, click HERE