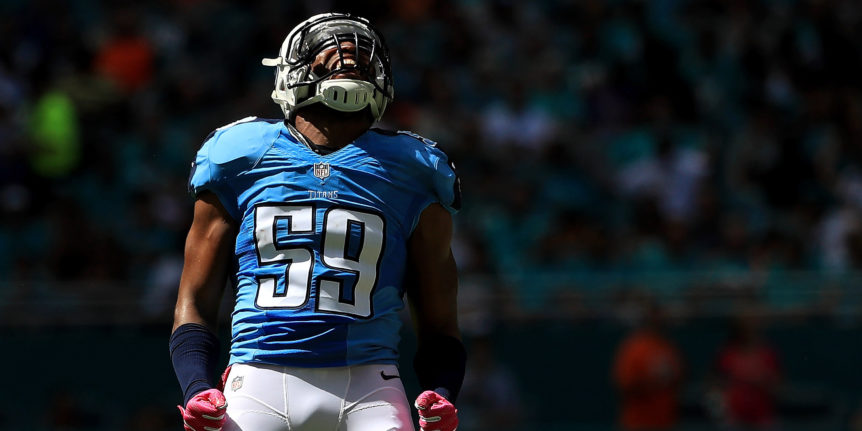 “They say you’re old when you get to 30 in the NFL, and a vegan diet was just a way for me to stay on top of my body, and keep me safe and healthy.”

Tennessee Titans linebacker Wesley Woodyard is in his 12th season in the league. For him, it’s not a worry. Woodyard has a plan and it starts on his plate.

Since 2017, the Tennessee Titans have drawn attention from outside of the NFL for having a high number of vegan athletes. They’ve become posterboys for PETA and Plant Based News as much as they’ve been covered by ESPN and Sports Illustrated.

The change began when former linebacker Derrick Morgan cut out meat, eggs and dairy from his diet and noticed immediate effects. He was supported by his wife, chef Charity Morgan, who prepared him vegan meals.

For chef Morgan, the impact of the dietary change was impressive. “I noticed the amount of energy that was sustained during gameday,” she says. Defensive end Jurrell Casey and former linebacker Brian Orakpo, along with a handful of others, also saw the way their teammate was performing and decided to make the switch.

The Morgans began catering for a 15-strong roster, with the similar physical results being mirrored across 30% of the starting team. “Many players shared the same benefits during long days of practice, while I noticed a whole loss of inflammation in the players’ faces and bodies, less puffy and more solid,” the Cordon Bleu-trained cook said.

Woodyard was one of the last of the team on board. When initially interviewed by ESPN in 2017, he was sceptical of veganism and it took some of his own research to make the switch. Speaking today, that scepticism has subsided: “I watched a documentary called What the Health, and I was challenged by the things that I was putting in my body. It started there, just being aware of chemicals I was putting in my body.”

“Then, you know, one weekend [and] I’m feeling great. Two weeks in, I’m feeling even better. Three weeks in, and now it’s the end of the season and my diet is holding up, my weight is holding up, and I’m recovering faster. My body was feeling great.” That year, he finished the season with a career-high 124 combined tackles, 84 solo, five pass deflections and five sacks in 16 games and 16 starts.

The benefits of the diet were clear to him so the choice stuck. “I haven’t eaten meat, any beef, or pork, or chicken in three years. It’s been a long time.”

The resulting success of the Titans did not go unnoticed by the rest of the league. “Some reach out to me or my husband asking us for advice – we started the wave,” chef Morgan says. “We allowed other athletes to see that not only is it good for high-performing athletes, but also it can be a competitive edge against other players.”

With only 16 weeks of football to make a mark, being able to stay competitive for the entirety of the season gives an edge to anyone wanting security in their spot on the roster.

Since going vegan, Woodyard has played all 16 games consecutively over the 2017 and 2018 seasons. Playing this high-impact sport for an entire season can cause a large amount of strain on the functional joints in the body: ankle sprains and knee tears are the most common injuries in the NFL after concussions. This hasn’t been the case for Woodyard: “I don’t swell up as much as I used to. Knees, ankles, lower legs, definitely the fluid is moving through my body at a normal pace.”

He attributes this to his diet full of clean, plant based carbohydrates and protein. “I just look at it like this – I’m putting high-energy fuel into my body, and I’m burning it off at a fast rate, and just continuing that same process over and over. I’m definitely healing a lot faster than I normally would.”

In Week 10 of the 2018 season, while other players were beginning to feel late-season fatigue, Woodyard earned himself the title of AFC Defensive Player of the Week. He registered 10 tackles and 1.5 sacks in a 34-10 victory over the New England Patriots. Woodyard finished the 2018 season with 113 tackles, 4.5 sacks, and two pass deflections. Not bad work for a 30-year-old in a conference with JJ Watt, Von Miller and Darius Leonard.

For Tennessee, being on the vanguard of the vegan athlete movement has meant being able to see long-term success. Since 2017, they have made the playoffs in the competitive AFC South division. The defense moved from ranking 17th for defensive points in 2017 to 3rd in the league in 2018. This year, they currently sit 4th. In terms of defensive yards, they were 13th in 2017 and, in 2018, stood 8th, the best position for the defense since its Houston Oilers era.

Despite chef Morgan taking a step back from catering for the team to focus on her business, the front office in Tennessee isn’t wanting to change anything that has contributed to their ascension in the defensive power rankings. “We get catered meals in-house, vegan meals,” Woodyard reveals, “and they’ve been helping throughout this year’s training camp.”

Woodyard also highlights that the Titans are open to supporting any kind of dietary requirements that may support their players. “Our organisation has done a great job of bringing in some chefs that can prepare not only vegan food, but give everybody their right dietary restrictions, and what they want to work.”

The vegan wave is growing in the NFL. In January, Carolina quarterback Cam Newton adopted the diet in an attempt to try something new to keep himself healthy after being sidelined by a shoulder injury. Despite since aggravating a foot sprain in Week 2 of the 2019 season, he is set to return after just five weeks of rest.

Woodyard laughs when asked if he thinks this could contribute to veganism’s rise in the NFL. “Why, because it’s Cam Newton? I think, anytime you get somebody that’s the face of their organisation, you’re definitely going to get some guys that are going to be more curious – just because it’s the starting quarterback for the Carolina Panthers.”

“Having him on board is probably going to sway and change some people’s opinions, and definitely make a few general managers upset with trying to adjust to the new diet.” There’s a wry smile on Woodyard’s face at the idea, albeit somewhat in jest, that maybe Panthers GM Marty Hurney needs to give chef Morgan a call.

Thirty might be seen as old by some in the league, but it’s unlikely Woodyard will be slowing down any time soon. He’s playing alongside two upcoming stars, third-year linebacker Jayon Brown and second-year Rashaan Evans. Brown and Evans might have age on their side, but a combination of experience and a diet that has him at the top of his game, physically, means the veteran’s not expecting to be left behind.

While veganism is a relatively new choice for players in the league, if Woodyard can keep this level of play in his 30s, we could be looking at veganism as a whole new strategy for career longevity in the NFL.

This article originally appeared in Issue 50 of Gridiron magazine – for individual editions or subscriptions, click HERE 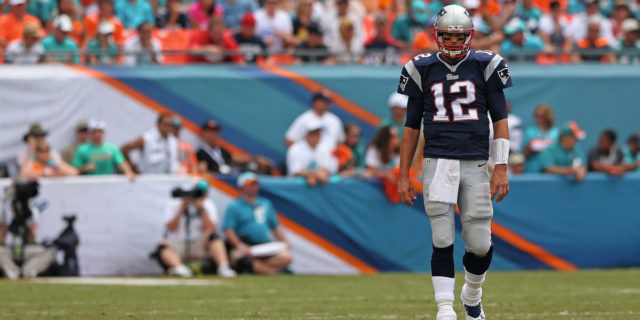 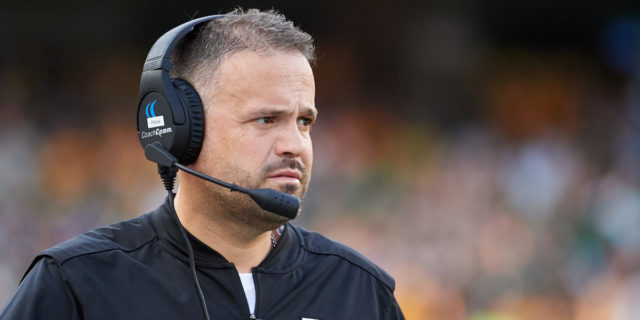 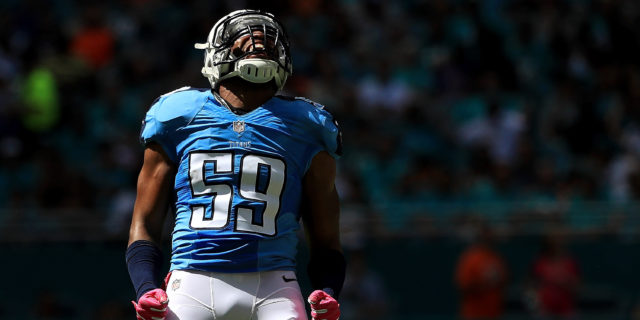 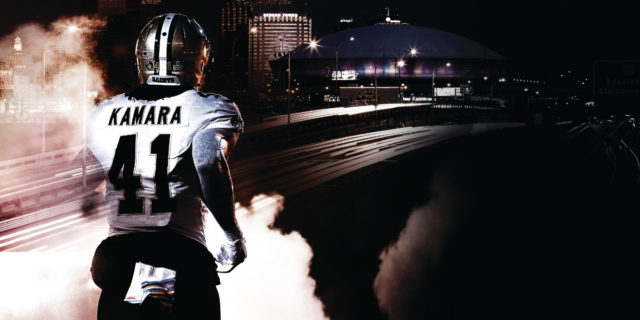 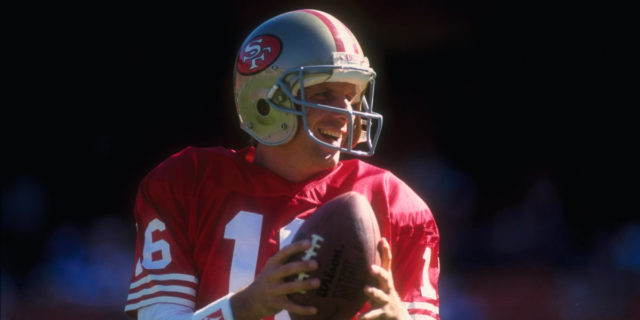