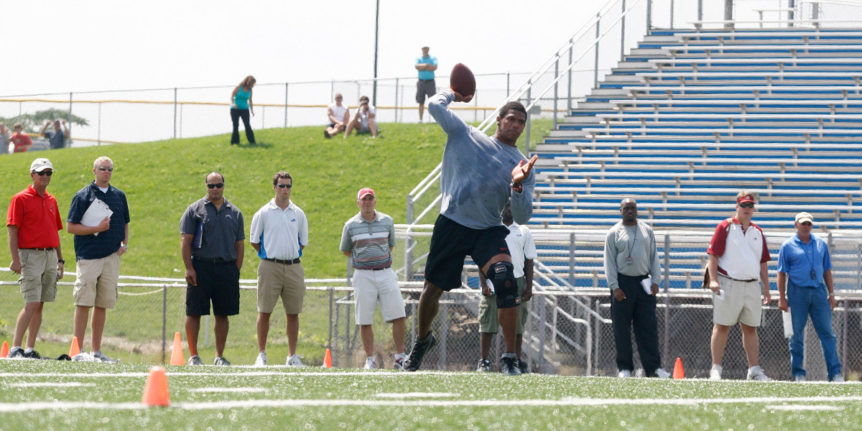 A former linebacker who played with the New Orleans Saints, Marc Lillibridge moved swiftly from playing to scouting, spending several years with the Green Bay Packers under the legendary Ron Wolf and is now the director of recruiting at Elite Football Academy.

How did you get into scouting?

I stopped playing in 2000, mainly because I wasn’t very good. I was limited athletically so what I did was devour tape to try to help me get better. People started telling me I should become a scout after my career was over because of how much effort I put in so, when I was with the Saints, I started writing reports on upcoming free-agents for their front office. They liked them and encouraged me to carry on, so it was a natural progression.

And I knew what I was looking for in players because I’d been one. I knew what made Player A more of a success than Player B. I felt good about grading offensive linemen because, as a linebacker, that was my job and I had some success there. So I applied for some jobs and ended up working in Green Bay under Ron Wolf – believe me, it doesn’t get better than that. We had a staff that included John Schneider, now the Seattle GM, Reggie McKenzie, now the Raiders GM, and John Dorsey, the general manager of the Chiefs. So that was a helluva team to learn from.

Take me through the year-long process – when do you start looking ahead?

It really starts about 13 months in advance. Let’s take the 2017 NFL Draft as our starting point. Say I’m on the road at the Auburn pro day, I’ll spend the morning watching tape of the 2018 kids before going out and watching the 2017 guys work out. So we’ll have an unofficial junior pro day early that morning where we weigh and measure guys and start to build our preliminary lists for the next year because, when the draft’s over, we’re off until the summer. This just gives us the opportunity to hit the ground running in July.

What’s life like for a scout on the road?

Well, you know what you’re getting into before you take the job. Late July through December is a lot of driving, a lot of hotels and seeing a lot of schools. Let’s say you’re the Midwest Scout: you’ll maybe do Missouri one day, Illinois the next, Iowa the day after. And you’ll want to be in early each day to get talking to people. I want to see counsellors and professors to find out what these kids are like, then onto coaches and strength guys and administrators, medical people. I want to build as clear a picture as possible about a kid, especially away from the field. Are they good learners in class? Are they high maintenance? What are their grades like? Those sorts of things. Really, you’re like a private investigator. Then you might leave a school at 2pm and have to drive a few hundred miles to the next hotel close to the following day’s school. Check in, room service and then start to write your reports. Most teams want the reports in that night so you could start writing at seven and still be typing at 2am if you’re at a school with a lot of prospects.

“A guy who body catches in game one isn’t going to be a hands catcher in games two, three and four.”

Take us through your on-campus scouting and the reports…

I want to be as thorough as possible, so I can only grade one guy at a time. If I’m watching the Georgia OL and there’s a tackle and two guards we like, I have to watch the tackle first before I go and watch each guard individually. That’s just how I worked. And I’m just making notes all the time: ‘Good punch, waist bender, good kick, sloppy transition, sucker for a double move’. Those sorts of things.

You usually watch three to four games on a guy to get a good feel. Listen, a guy who body catches in game one isn’t going to be a hands catcher in games two, three and four, so you can start to build a picture early on. And really good players you only see a couple of times initially because you know their talent. The reports are really just made up of what you’ve seen on the tape and then all the background stuff. And it’s just an opening report. It’ll be tweaked considerably through the season.

At what point as a staff do you all get together and go through the reports?

That doesn’t happen till December, before the Bowl games. You’re very much on your own through the season: visits, driving, reports, checking, games, repeat. But then as fall becomes winter you’ll start to get the Director of Scouting and the GM out on the road watching games. And maybe the DoS will take in 60 and the GM will take in 40. And they’ll write reports based on what they’ve seen. So now you might have three reports on one of your players.

Then in December each area scout – Midwest, West Coast, South East, etc – will be given a position. So I might have gotten cornerback, for example. It’s then my job to watch film on every corner that we have reports and grades on, regardless of whether they play for USC or Florida State. That’s another report on the same kid. It’s just a process of check and double check. Once that’s done, we’ll start to rank guys, start to stack our board. Atlanta, for example, is a team that sets its board very early because they’re confident in the process. But most teams do that early January and then go back with about two or three weeks to go before the draft and just watch every catch a receiver has made or every block a guard has made, all in isolation. Just to be sure.

How important are the All-Star games and the combine?

They’re a small part of the process. They’re conformation of what you’ve seen on tape and in person for months, or at least they should be. Any team that’s blown away by a guy at the combine and changes their grade by two to three rounds is a team that’s consistently going to lose. What you see at the Senior Bowl or in Indy shouldn’t be a surprise to anyone. It’s a time to get to know a kid a bit more via the interviews, but everything else is confirmation. You’ve seen a guy in pads and you’ve watched him make plays. Nothing he’ll do in shorts after two months of training should change a grade beyond a few positions. And if it does, then you’re doing it wrong.

“It’s a helluva ride. And then it’s two months off!”

You’ll have ‘your guys’, players that you love and would go to bat for. Is it frustrating when the GM doesn’t feel the same?

It’s the same in any walk of life. If your boss comes over and says ‘your work sucks’, then it’s upsetting. No-one likes to be told that they’re wrong. But the GM is your boss for a reason. The key is to be able to show him where you think your guy wins. That was one of the great things with Ron Wolf: he loved scouting kids but he’d get pissed if he missed something that you saw and he didn’t. He’d go out of the room and take a walk around to cool down. That was just the competitor in him. Every good team should have that give and take.

Give us some guys you’ve hit on and some that you’ve missed on.

Anyone can say that Von Miller is going to be great. Or Andrew Luck. So let’s give you some off-the-radar guys. I was really high on Josh McCown out of Sam Houston State and it’s good to see the career he’s had. Cullen Jenkins is another. I had a great report on him and we got him as a free agent. I put him through his pro day and I thought he’d be a solid NFL player and so it turned out. Damon Harrison is another free agent out of William Penn that I loved. In terms of misses, I really whiffed on Dion Jordan out of Oregon. I thought he’d be an All-Pro. And I was really high on J.T. O’Sullivan out of UC Davis. I thought he’d be the guy, but it wasn’t to be.

And what about Draft Day itself. Are you in the war room?

Totally depends on the team. Some teams like all the staff in there, some just like the main front-office guys. In Green Bay we were all in there and again, it’s often just for affirmation. So let’s say there are two guys you like in the third round that ‘belong’ to two different area scouts, so you’ll get asked quickly and briefly for an assessment.

Sometimes it’s for comfort, other times the owner might be in the room and you’re just telling him the kind of kid he’s getting. Day three is the key day for the scouts because that’s when we’re working the phones, calling the guys we think will be priority free agents, kids we’ve built a rapport with. And while you hate to burst their bubble over not being drafted, you’re trying to sell the opportunity they’ll get with your franchise. It’s a helluva ride. And then it’s two months off!