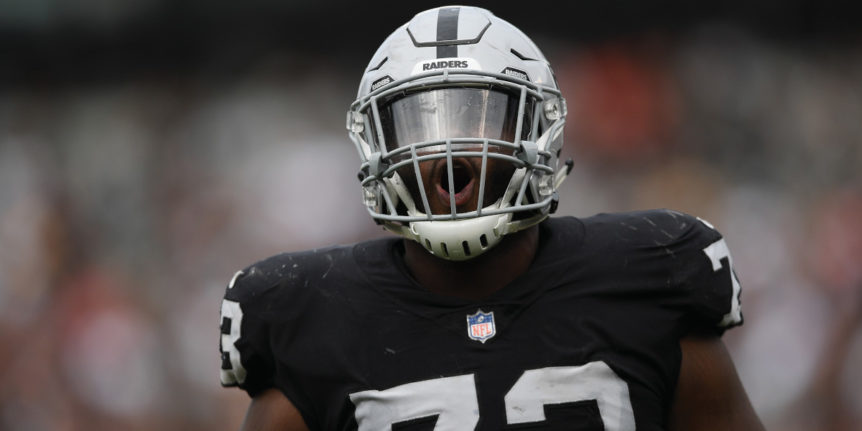 This article originally appeared in Issue XLII of Gridiron magazine, back in 2018 – for individual editions or subscriptions, click HERE

There is a telling moment during Amazon Prime’s All Or Nothing documentary following the 2017 Michigan Wolverines where star defensive tackle Maurice Hurst picks up a customer in his side gig as an Uber driver. They begin talking about the football programme and it turns out the passenger is a fan. Yet that fandom doesn’t help him recognise the man behind the wheel, leading to the brilliant moment where he asks, “Do you have season tickets?”

Hurst laughs and sheepishly replies: “I actually play on the team. I’m a defensive tackle.” After a bit of discussion on the quarterback situation, the guy leaves the car, and Hurst signs off by saying, “No. 73.” To which the customer responds: “I’ll look out for you.”

If he did, indeed, ‘look out’ for Hurst, what he’ll have found is likely the most dominant player on the field. Because what the soft-spoken star failed to mention is that, not only was he on the team, but he was the Wolverines’ best player. A dominant defensive tackle who, at that stage, seemed certain to be a top-five pick in the ensuing year’s NFL Draft.

Yet, on that day, like many others, he was just ‘Mo’, the easy-going Uber driver. “The last thing they expected was a player driving,” he tells Gridiron. “So it was fun to ask them questions and get a perspective on the team. Sometimes they’d talk trash – but it was all fun and games. It was awesome hearing them talk and have no idea I was on the team!”

The aim of his part-time job, of course, was to make some money, just a little to see him through his senior year. But it wasn’t the be all and end all because, after all, he was just months away from cashing in to the tune of millions.

Or so he thought.

“Many teams took Hurst completely off the board due to the condition, the full nature of which hasn’t ever been revealed.”

The intervening months between that conversation, which occurred three weeks into Michigan’s campaign, and the NFL Draft were frustrating. Hurst was as dominant as ever on the field but, like the rest of the Maize and Blue’s outstanding defense, let down by the lack of a viable quarterback as the Wolverines finished a disappointing 8-5.

With that irritation in the rear-view mirror, Hurst had intended to wipe the slate clean and focus on his efforts to reach the pros. Yet the rug was pulled from under him before he was able to get settled when doctors unearthed a heart issue and he was sent home from the NFL Scouting Combine. For Hurst, the ailment was no surprise; he’d been diagnosed, and played on, since his freshman year at Michigan. “I was surprised at the reaction to it,” he admits.

For all the inability to showcase the abilities that had many analysts comparing him to Aaron Donald was a blow to Hurst, he didn’t anticipate it being too damaging. But the NFL didn’t quite see it the same way. Much to his surprise, many teams took Hurst completely off the board due to the condition, the full nature of which hasn’t ever been revealed. That led to an uncomfortable draft night. “I just spent the time with my family and just waited to get the call from a team.” Waited. And waited. And waited some more.

“It’s tough going into it thinking that you’re one of the top players in the draft and having good tape and everything like that,” Hurst admits, “To then have to wait and see guys that you believe you are better than go ahead of you, it sucks.”

It was the same story on day two; another pair of rounds passed without Hurst hearing his name called, and he had to endure the ignominy of seeing his name top the list of NFL Network’s ‘Best Player Available’ for hours. “I just had to stay positive through it all,” he says. “I knew some good stuff was gonna come out of it.”

Hours became days and Hurst continued to wait. All until the Saturday, round five, pick 140, when the Oakland Raiders raised their head above the parapet.

“To have the relief of actually being drafted and seeing my family’s reaction, and how proud they were of me achieving my life’s goal, was huge in and of itself.”

Older football fans may hear Maurice Hurst and think it rings eerily familiar. That’s because a player by that exact name plied his trade on NFL fields through the early 1990s and, unbeknown to many, is actually Mo’s father. Yet that fact was only given a small line at the bottom of Hurst’s biography at Michigan, for their relationship is almost non-existent.

Hurst was raised almost single-handedly by his mother, who worked 70-hour weeks to send her son to private school and, during his days on Michigan’s campus, cancelled a cable subscription to fund travelling from her home in Massachusetts to his games.

And so, for all the agony of the days leading up to it, that moment – when Irvin Ridgeway, assistant fire chief at Nevada’s Nellis Air Force Base, joined Raiders legend Greg Townesnd and announced ‘With the 140th pick of the 2018 NFL Draft, the Oakland Raiders select Maurice Hurst, defensive tackle, Michigan’ – was still extra special. A validation for all of Nicole Page’s sacrifices along the way. “It was an amazing moment,” reveals Hurst. “It doesn’t get much better than that. To have the relief of actually being drafted and seeing my family’s reaction, and how proud they were of me achieving my life’s goal, was huge in and of itself. I’m stronger from that experience, and the ones throughout my life. It makes you a better person overall. I don’t take anything for granted.”

Page gave birth to Maurice on May 9, 1995, while she was a cheerleader for the New England Patriots – who Hurst Sr. played for as a cornerback. Seven months later, a particularly bad performance at Indianapolis – ironically against his son’s future Michigan coach Jim Harbaugh – spelled the end of Sr.’s NFL career; he was released the following day with a year remaining on his deal.

Hurst was out on the Patriots, and out on his family – who he hasn’t had much of a relationship with since. When pressed on the issue, it’s clear the Oakland Raider isn’t overly keen to talk about his father. But he did offer some insight: “I’m my own man,” he says. “That’s how my mother raised me.”

Throughout our conversation, Hurst frames many of his responses against the backdrop of him ‘being the kind of person I want to be’, and you wonder whether that’s a reference to his father. There is surely part of him, too, that would like to surpass his father’s on-field achievements; Sr. was a fourth-round pick who played six years for his only team, New England.

Yet for all comparisons can be made in draft position, they end there. Hurst is a powerful defensive tackle, while his dad was a cornerback. While Hurst Sr. aspired to be the next Mike Haynes, Hurst is trying to emulate the man whom he was most compared to during the pre-draft process, Los Angeles Rams star Aaron Donald.

“AD is someone I look up to,” he enthuses about a player with whom Hurst shares an agent and exchanges texts. “He changes the game, every game. The biggest thing I try to take away from him is how he impacts every play and is so disruptive. I want to try to craft my game to be as destructive as him. Hopefully I can get to his level. He’s playing at a Hall of Fame level right now; it’s fun to watch that tape for 30 minutes every week.”

He may not quite be Donald yet, but Hurst’s tape is also proving a fun watch.

“They both totally love, and are infatuated by, the game. They eat, sleep and breathe it every single day.”

Life as a first-year Oakland Raider must be interesting for Hurst. It started with the hoopla surrounding Jon Gruden’s ballyhooed return to an NFL sideline after 10 years in the commentary booth, but much of that has fizzled amid a disappointing start.

The worst part for Raider Nation has been the performances of a player not even on their roster: Khalil Mack. He was sent packing to Chicago prior to the year amid a contract holdout – so much so that Hurst didn’t even get to share the practice field with him. That has preceded acceptance that Gruden is orchestrating a full facelift for the Silver and Black, a notion only solidified by the recent trade of Amari Cooper to the Dallas Cowboys.

Those two deals have netted three first-round picks for the Raiders – who now own five across the next two years, including three in 2019. And, if they can invest those as shrewdly as they did last year’s fifth-rounder, Chucky may yet prove the naysayers wrong.

For, in Hurst, they are already getting first-round production. Through eight weeks of the campaign, he is Pro Football Focus’ top-rated defender on the team. “The acclimation process has been smooth,” he says. “We need to stay positive right now and keep working. There are a lot bigger goals in mind. We need to get as many wins as possible before the end of this year, and get hot.”

As for Gruden, he has made a believer of his rookie. “He knows the game inside and out,” Hurst says. “His passion for the game of football is incredible.” Hurst should know a thing or two about good coaches, too, having spent much of his college life under the tutelage of Jim Harbaugh. But how do the two compare? “The big similarity is passion. They both totally love, and are infatuated by, the game. They eat, sleep and breathe it every single day. There isn’t too much of a difference between those guys; they’re great coaches.”

“You have to take pride in everything you do. That’s a big emphasis for me. Whether I’m driving an Uber or playing football.”

When the dust had settled on his draft-day disappointment, Hurst began to count the cost of it. He’d gone from expecting a contract of around $17million over four years to one totalling just under $2.5million over the same period. “I’ll probably have to keep driving for Uber,” he told reporters on a conference call.

But, for all he was (we think) joking, there’s little doubt the company would have him back; Hurst boasts a near-perfect rating behind the wheel and once tweeted, ‘86 5 Star Trips….4.96 Rating….and 0 trips cancelled’, followed by five star emojis and two goat ones.

“You have to take pride in everything you do,” he says. “That’s a big emphasis for me. Whether I’m driving an Uber or playing football, I’m going to do the best job I can. That’s my character, and how I’m trying to be as a person.”

This article originally appeared in Issue XLII of Gridiron magazine, back in 2018 – for individual editions or subscriptions, click HERE