We’re calling it the Gridiron International Issue. We’ve travelled far and wide to bring you these 64 pages, from Odessa, Texas all the way to New York. The international theme, though, begins on these shores as we offer up some cracking features on the two teams heading across the pond for the opening International Series game.

The first of those takes us to South Beach, where former New York Jets general manager Mike Tannenbaum is attempting to repair his shattered reputation by revitalising the Miami Dolphins. Simon Clancy speaks to Tannenbaum and some of those closest to him in a comprehensive profile of this remarkably interesting individual. We’ve also got an exclusive interview with the personnel guru’s biggest off-season acquisition Ndamukong Suh, with editor Matthew Sherry explaining why he’s the NFL’s answer to Two Face. From Florida, we head to the Big Apple as rookie Gridiron writer Sam Green heads to the Jets’ season opener versus the Cleveland Browns. He went expected to see a team revitalised, but what did he found?

There’s a whole host more in this issue, but the main feature to look out for is our amazing look at Friday Night Lights. Gridiron headed deep into West Texas to Odessa and visited the real-life Permian Panthers to get the inside story on the school at the centre of the book that inspired a film and TV show. We spoke with former head coach Gary Gaines, author Buzz Bissinger and many more people to bring you this fabulous insight into high-school football in the Lone Star State. It might be the best feature we’ve ever done, so please buy the magazine and read it!

To make sure you don’t miss a single snap, order your Gridiron Subscription here today – and you could with a trip to either the AFC or NFC Championship Game with Sports Travel Tours.

Unfortunately for Goodell, there has perhaps never been a more questionable period of leadership since Stone Cold Steve Austin briefly ascended to the top of the then-WWF in 1999, and took to swinging on his office chair, feet on desk, knocking back ‘Steveweisers’ in board meetings. – Editor Matthew Sherry has been unimpressed by Roger Goodell’s handling of the Deflategate saga.

I think, to some degree, Washington broke the shiny new toy they bought themselves in 2012. Remember the painful viewing of that playoff loss to Seattle at the end of his rookie year? – Neil Reynolds brings the heat on Washington as RGIII’s career heads towards the abyss.

“It was obvious on first sight to me that he was a serious physical specimen. I mean he passed the eye test and then some.” – Aldon Smith’s high-school coach discusses the first time he saw the troubled pass rusher. 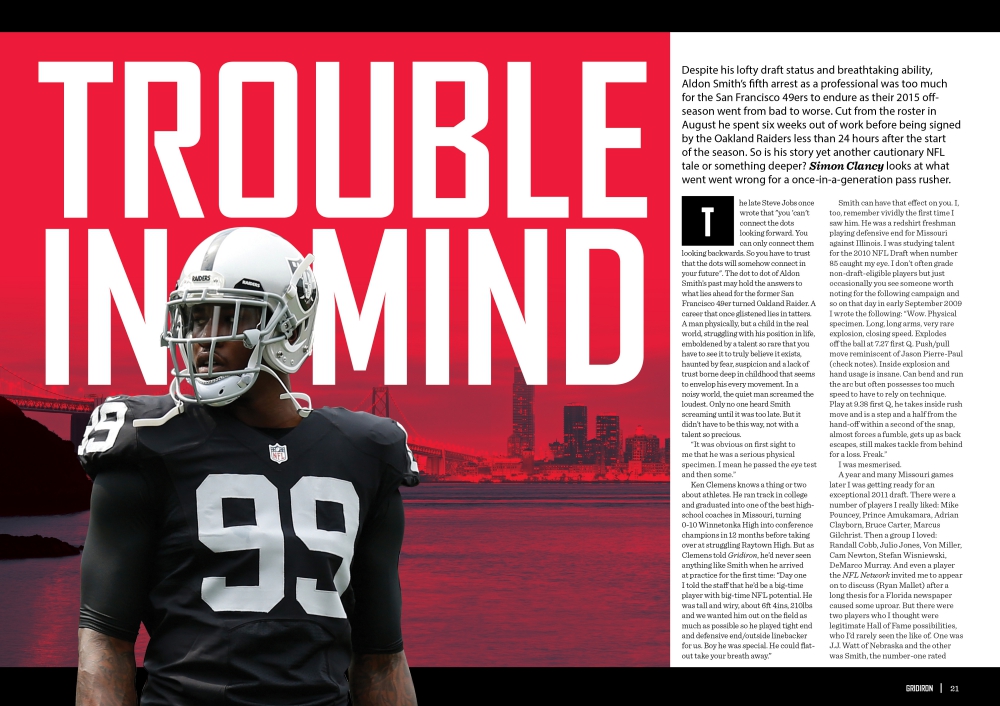 Work be damned, I’ll catch up in February. Family? Friends? They’ll still be there in five months’ time. You’ve heard of a holiday romance? This is a winter fling – time to get down and dirty with 53 men every Sunday night! – Our Couch Potato is back in football mode.

“I mean that’s what helps athletes play to the best of their ability – just to have that natural knack to go inside the white lines and know it’s no-holds-barred and there are no friends out there.” – Ndamukong Suh tells Gridiron what changes when he steps on a field.

“He’s dogged in his pursuit of success and he’s very determined. He’s also the smartest guy in the room. He’ll never brow beat or intimidate and he’ll always use good judgement, but boy he’s gonna charm you.” – A sound judge tells Simon Clancy what he thinks of Mike Tannenbaum. 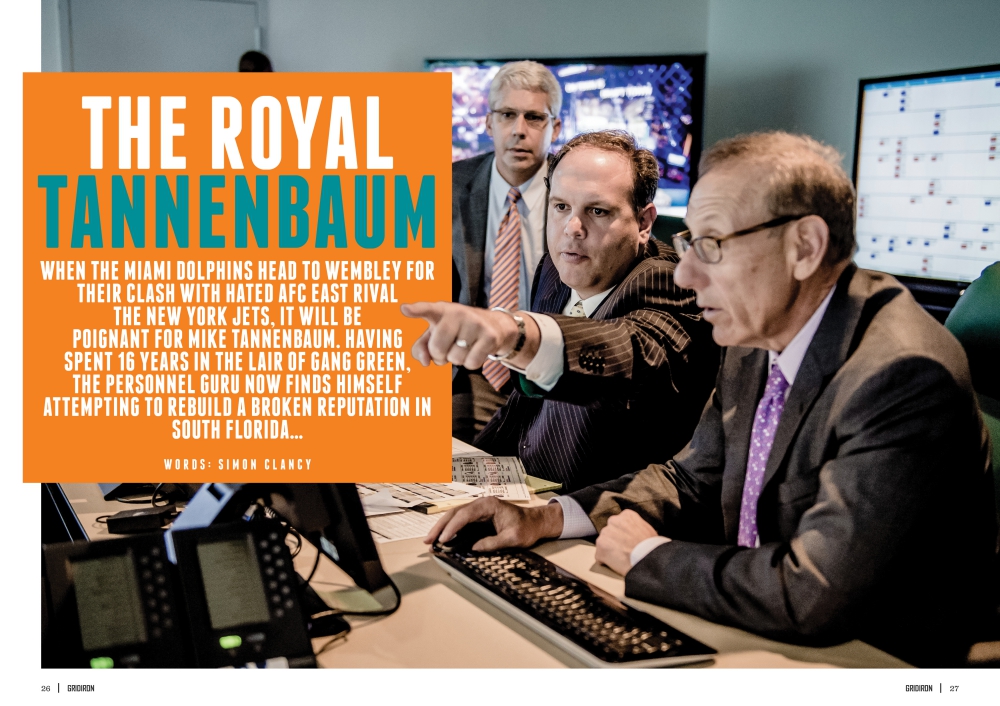 “I don’t know if anybody’s worth the money guys are getting today! But he certainly is worth it when you’re talking about defensive interior players.” – Our resident coach Jeff Reinebold is sold on Miami’s new recruit.

“We recruited DeShone Kizer because he can run the system of offense that I like to run.” – Notre Dame head coach Brian Kelly on the man tasked with ensuring the Fighting Irish can remain in the College Football Playoff conversation.

“Things never go smoothly. When you’ve followed the Jets for as long as I have, and you’ve seen so many ups and downs, you never take anything for granted.” – A 25-year Jets fan from Queens is a realist when it comes to his team. 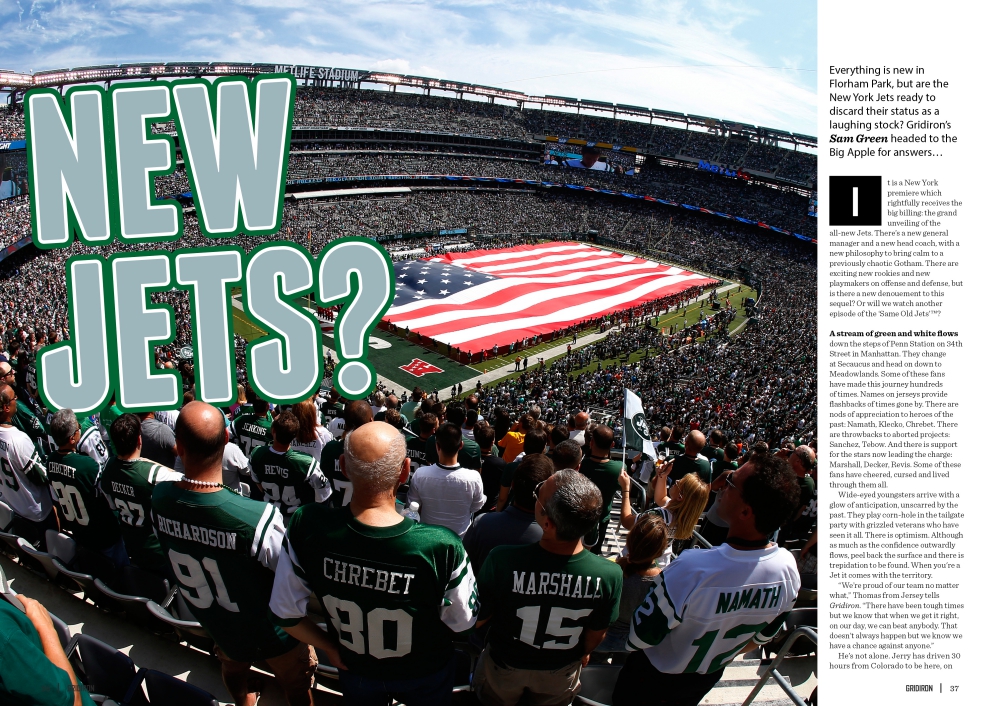 “That was certainly our toughest loss of that season and one of the hardest losses I had in my career. – Jay Fiedler tells Gridiron about one of the most famous games in NFL history: the Monday Night Miracle.

“When I was 13 I read an article by the great Dan Jenkins about a high- school quarterback called Jack Mildren who was playing at Abilene Cooper in the late 1960s. He was the god of the town. Everybody knew who he was; everybody idolised him; he was playing in front of 15,000 people. He wasn’t much older than I was and I kept asking myself, ‘What is it like to be that famous?’” – Buzz Bissinger explains the origins of his award-winning book Friday Night Lights. 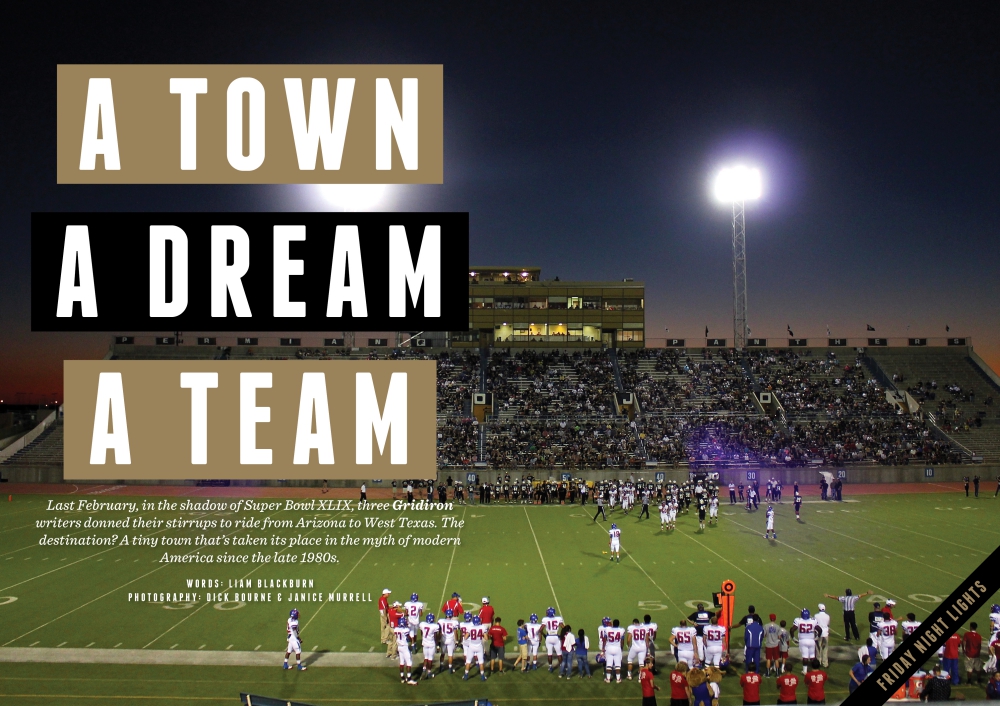