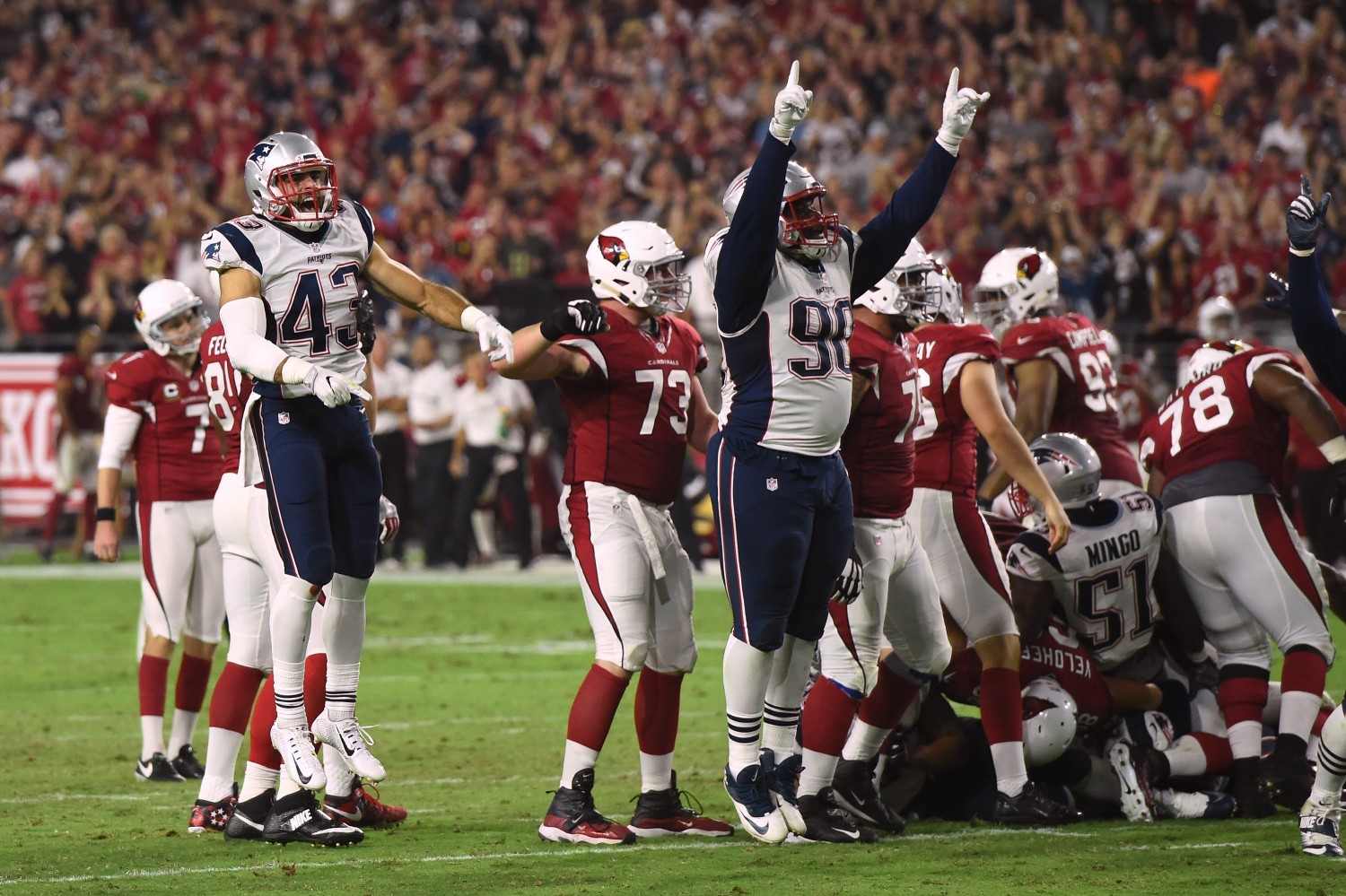 In the first Tuesday Morning Touchdown of the new NFL season, the Gridiron Team give their takes on the talking points of Week 1, from the targeting of Cam Newton in Thursday night’s kickoff game to the resilience of less experienced QBs later in the weekend.

Tom Brady. Rob Gronkowski. Dion Lewis. Nate Solder. Sebastian Vollmer. Rob Ninkovich. Two Hall of Famers, Brady and Gronkowski, the starting tackles, one of the NFL’s most dangerous weapons and a veteran defensive end. They were all absent and yet, somehow, the New England Patriots rode into Arizona and beat many people’s Super Bowl pick in their own backyard under the spotlight of Sunday Night Football. Regardless of what else happens this season, we may already have seen the outstanding win of the campaign.

That the Patriots left the scene of their Super Bowl XLIX triumph victorious was thanks to the enduring brilliance of Bill Belichick and his coaching staff (offensive coordinator Josh McDaniels deserves just as much credit), but also an outstanding few years of roster-building. This New England team is the best in the NFL right now. They are so good that the only thing standing between the Patriots and another Super Bowl berth is surely injuries. If Week 1 is about making statements, Belichick and Co. were the winners. (Matthew Sherry)

Jim Bob Does It Again

Detroit’s offense was rejuvenated when Jim Bob Cooter took the reins midway through last term and they started life after Megatron looking as good as they ever have in the Matthew Stafford era, scoring more points than anyone on Sunday. The key was the versatility of the two running backs, with Ameer Abdullah, once compared to Barry Sanders by Jets head coach Todd Bowles, looking particularly explosive after a difficult rookie campaign, and the shifty Theo Riddick proving a key weapon in the passing attack. Yes, they were against a banged-up Colts team that lost more defensive members during the game, but the Lions offense could put them in the playoff picture on this evidence. Without Calvin Johnson, they actually look more balanced as Stafford spreads the ball around. Eight players had receptions – six accrued multiple catches – and their running backs were a big part of it. Now, if the D can just work out how to cover tight ends… (Liam Blackburn) 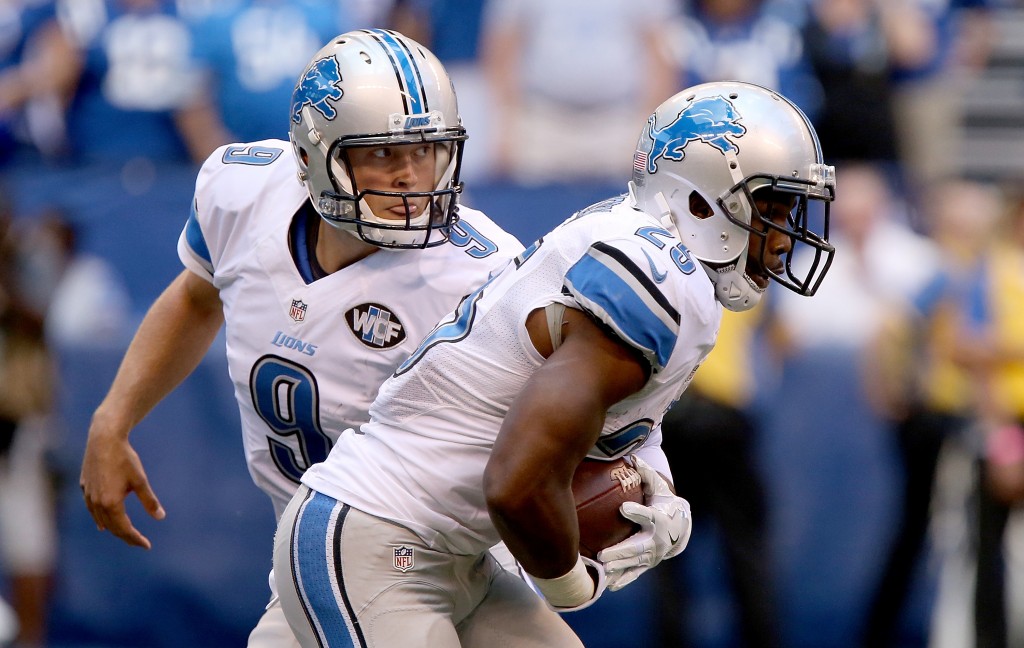 Got Your Back, Dak

Hyped through the preseason, Dak Prescott showed that he may indeed be the future of the Dallas Cowboys after all as he impressed against multi-million dollar Giants defense, showing poise in the pocket and working through his options to put the Cowboys up 6-0 and rallying to another three points after Big Blue struck back. If there was any knock on Prescott and the Cowboys in the first half, it was the old story of not being able to convert time of possession into touchdowns, which ultimately came back to haunt them at the end. But, while he may not have been able to produce the ‘W’, his composure – the rookie never threatened to turn the ball over – indicated that Prescott’s preseason was no fluke. (Craig Llewellyn)

In the first issue of this year’s Gridiron run, we chose our ‘16 For 16’, covering the biggest storylines entering the season. One of the list surrounded the referees and the infuriating inconsistency that plagued last season. Unless every quarterback is going to fall victim to multiple headshots with the zebras sitting idly by, they’re off to a heck of a start – for the treatment dished out to Cam Newton on opening night was a disgrace. He was repeatedly targeted to the head by a Denver defense with previous, and the referees’ laissez faire attitude felt like the ultimate difference in a one-point game.

In the end, that took away from an excellent second-half performance by a Broncos defense that evoked memories of last year’s all-time unit, even if they weren’t quite as dominant. The early returns suggest Malik Jackson will be a significant miss, while the likes of Mike Remmers and Michael Oher are, frankly, sitting ducks for Von Miller and DeMarcus Ware. Overall, we think it’s clear Denver’s defense takes a step back – although an improved offense, based on Week 1, indicates that they again look a live team in the AFC playoff race. (Matthew Sherry) 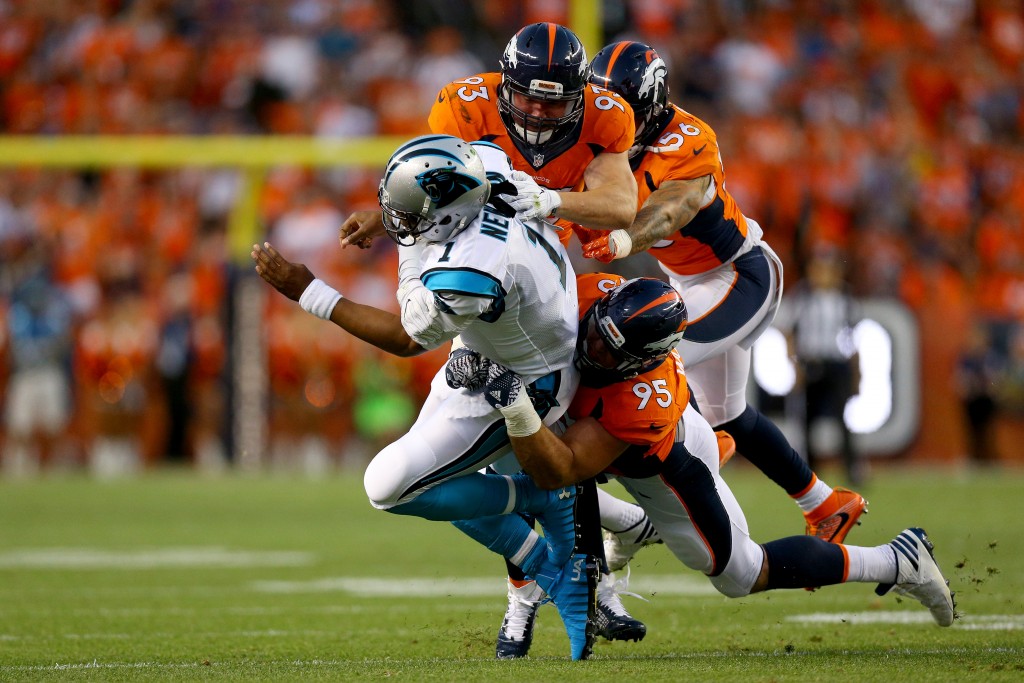 With Jordy Nelson back, it’s given licence for Aaron Rodgers to show us once again that he’s one of the best in the business. He was excellent throughout (apart from a few first-game underthrows on the opening possessions) as the Green Bay Packers left Jacksonville with a hard-fought 27-23 win. Yet 12 wasn’t the only reason for Packers fans to be excited, for there were several notable performances from a defense expected to improve in 2016. Morgan Burnett was outstanding, while Clay Matthews led a strong effort from the D-line with a sack and two tackles for loss.

Going forward, the Packers will iron out some of the Week 1 kinks and get more from Nelson, Randall Cobb et al. Eddie Lacy looked like he was closer to Rookie Eddie of 2014 than Fat Eddie of 2015, while the defense held T.J. Yeldon to just 39 yards despite giving up 21 to the running-back in the opening quarter. Given the unbearable heat (over 100 degrees fahrenheit), Green Bay confirmed their status as Super Bowl challenger in Week 1. (Olly Hunter).

Is Fisher Worth The Price?

Oh, Jeff Fisher. That really wasn’t the way to begin the process of trying to save your job in the Rams’ first season back in Los Angeles. To be shutout by a talent-starved San Francisco 49ers team in the franchise’s first game since their homecoming is just about the poorest start Fisher – who’s clearly pinning his hopes of additional job security on the fact we’re yet to see Jared Goff – could have endured. The idea of earning patience by sitting Goff is surely predicated on at least looking competitive, which should be possible given the talent on defense. Fisher has seemed untouchable recently, but it’s hard to see that continuing if his team keep performing like they did on Monday night. Their display wasn’t so much ‘some 7-9 bullsh**’ as much as it was ‘some 0-16 bullsh**’.  (Will Gavin)

The NFL is back… and with a bang baby. We can barely remember a more entertaining gameweek with close shaves, amazing debuts and, of course, boneheaded mistakes lighting up our screens. Long may it continue.