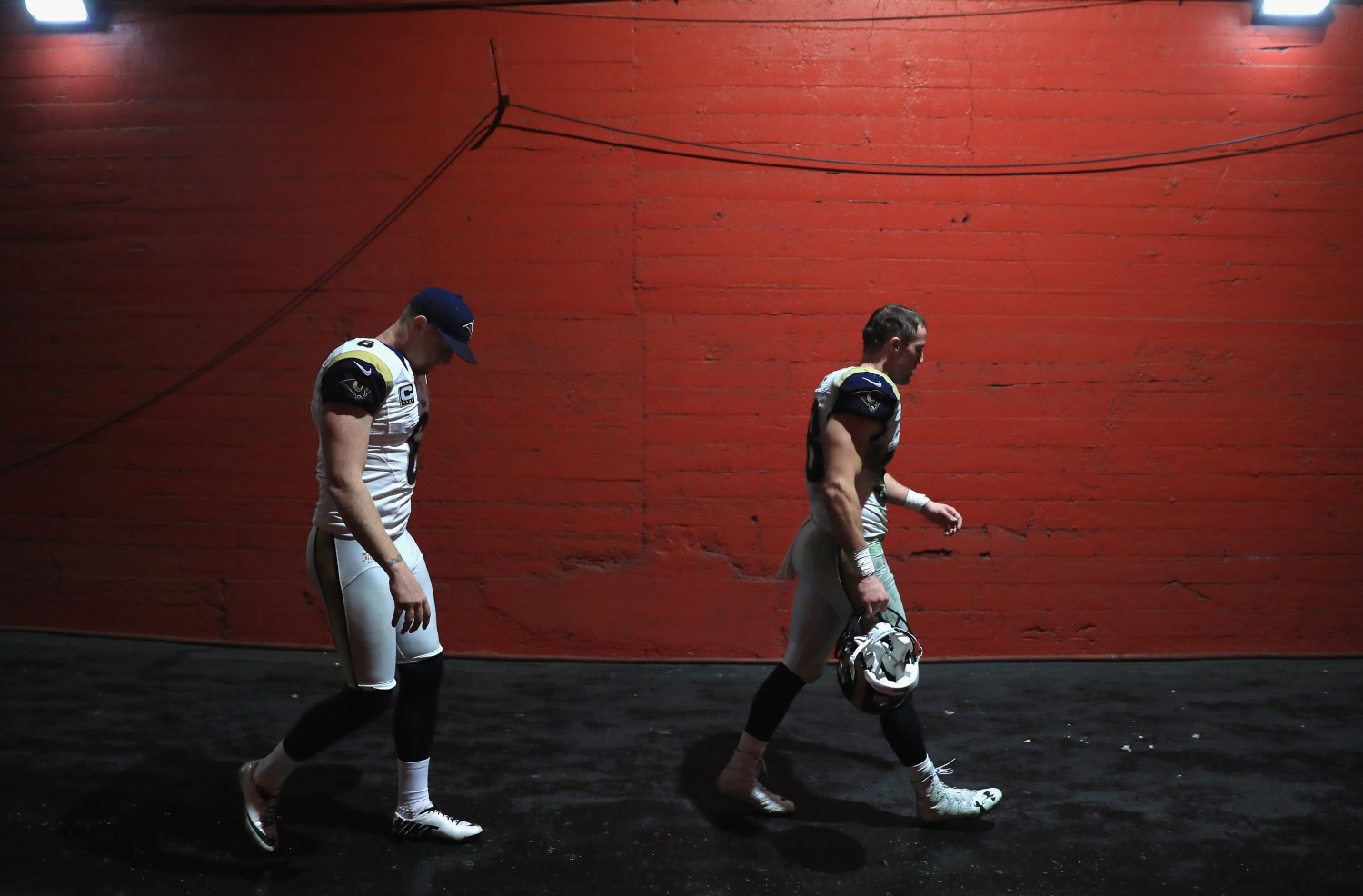 Strangers in a strange town

The Rams are homeless and it shows.

They are tenants at USC Trojans’ iconic stadium, where the 1984 LA Olympics were held, and that shows too. The bowels and changing rooms are clad in the USC cardinal red and the Olympic rings adorn the outside. This isn’t the LA Rams’ stadium and in no way did it feel like it inside against the Dolphins.

Before the game, the tailgates where buzzing with people in their Rams jerseys, including a few Goff ones given his first start in professional football, more Gurleys but no Keenums. There was plenty of Dolphin turquoise mixed in too, but what was most surprising was the prevalence of other jerseys: Broncos, Raiders, Packers, Cowboys and Colts to name but a few. Angelenos clearly see this as an event to watch NFL football and show their colours, regardless of their teams. It was reminiscent, albeit on a smaller scale, of the London games.

Once inside this old old stadium, and despite the claim that just over 83,000 tickets were ‘distributed’, I’d be surprised if there was two-third of that number in The Coliseum. Sure, many were turned off by the deluge before the game and the near constant rain forecast during and after it, but also some by the attritional football of late too. Of those there, nearly half were Dolphins fans, and they made themselves known as Miami came back from a 10-0 deficit with four minutes left to win the game.

The Rams, clad in white – normally the colour of the away team – are rudderless on the field and somewhat so off it too. The sooner they move into a stadium of their own and shed this nomadic existence (feeling unwanted in St Louis, International Series games and almost an afterthought in the Coliseum) the better. However, if they share Inglewood with another incoming team like the Raiders or Chargers, then it’ll be tough – and some years – before they make an imprint on this city. (Olly Hunter)

A trend that seems to hold more than most in the NFL is a perennially bad team looking like they might finally become good following up a statement win with a precipitous fall.

That’s the fate that befell the Tennessee Titans this week as they slumped to a 21-14 loss against an Indianapolis Colts team that has their number. The Titans might be the pick of the AFC North this year, but their playoff hopes are suddenly in tatters following two defeats to a Colts outfit getting better play than ever from Andrew Luck and his slew of receiving weapons, but continuing to struggle elsewhere.

Lots of plaudits were thrown Tennessee’s way following their shellacking of Green Bay last week but, in reality, they have blown a real opportunity this year. And it’s hard to see them ever being really good with Mike Mularkey pulling the strings. (Matt Sherry) 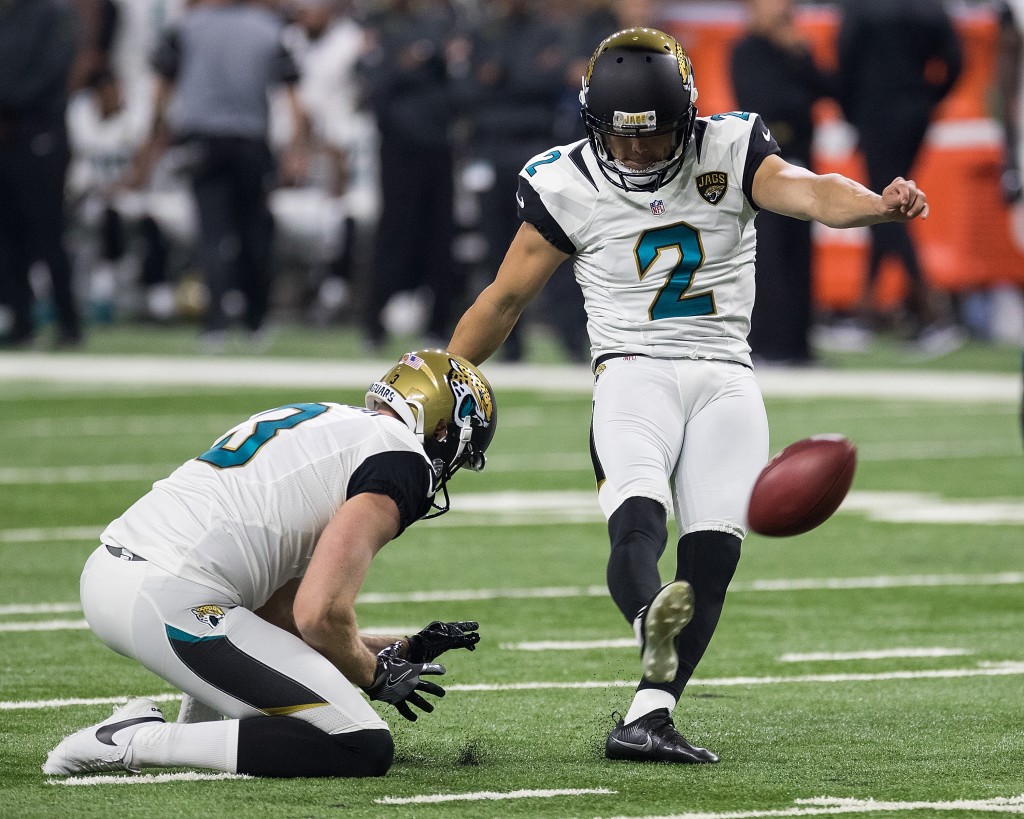 Sunday was not a good day to call yourself an NFL kicker, with no fewer than ten of the league’s 32 ‘specialists’ failing to record a 100% PAT record.

Okay, so the conversion attempt was moved back to make the kick more unpredictable (although players have had a year to get used to the extra distance), but a record twelve PATs were either shanked, deflected or found the uprights to set a new record in the Hall of Shame. Some will blame the wind – stand up Dustin Hopkins, whose Washington team still triumphed despite the conditions in the capital – and others the athletic ability of their opponents (Matt Prater, Kai Forbath, Steven Haushka), but for others than can be little excuse.

It can happen to the best of them as the Patriots’ Stephen Gostkowski proves, and Connor Barth and
Cody Parkey (also playing outdoors) might take some solace from being in that sort of company, but Jason Myers’ miss for the hapless Jags came indoors and, unlike Prater and Forbath, without any help from the flailing limbs of the defense.

Worse still, Robbie Gould and Mike Nugent both missed two attempts, and having also been wayward at Wembley, the latter’s spot on the bench probably got a little hotter as Cincinnati fell to Buffalo at home.

It’s an old one, but each of the terrible ten is no doubt kicking themselves – and probably missing…. (Craig Llewellyn)

Texans in a bad spot

The referees in the NFL continue to ruin games, and it’s hard not to feel for the Houston Texans.

That fixture in Mexico was huge for their season, due to the Indianapolis Colts suddenly breathing down their necks and the fact they could have earned a crucial win over another likely AFC playoff team, thus boosting their seeding come postseason time – if they get there. To see such hopes dashed by a series of dreadful calls is disappointing.

While much of the focus will surround the refs whistling dead a likely DeAndre Hopkins touchdown – although the video suggests his foot may just have sneaked out – it was the back-to-back terrible spots in the fourth quarter that will resonate. The Texans twice made a first down on third- and fourth-and-one, only to see both ruled short – the second on review. I have no issue with refs making errors on the field – it’s a tough job – but on video?! It was staggering – and those calls could have huge implications in January. (Matt Sherry) 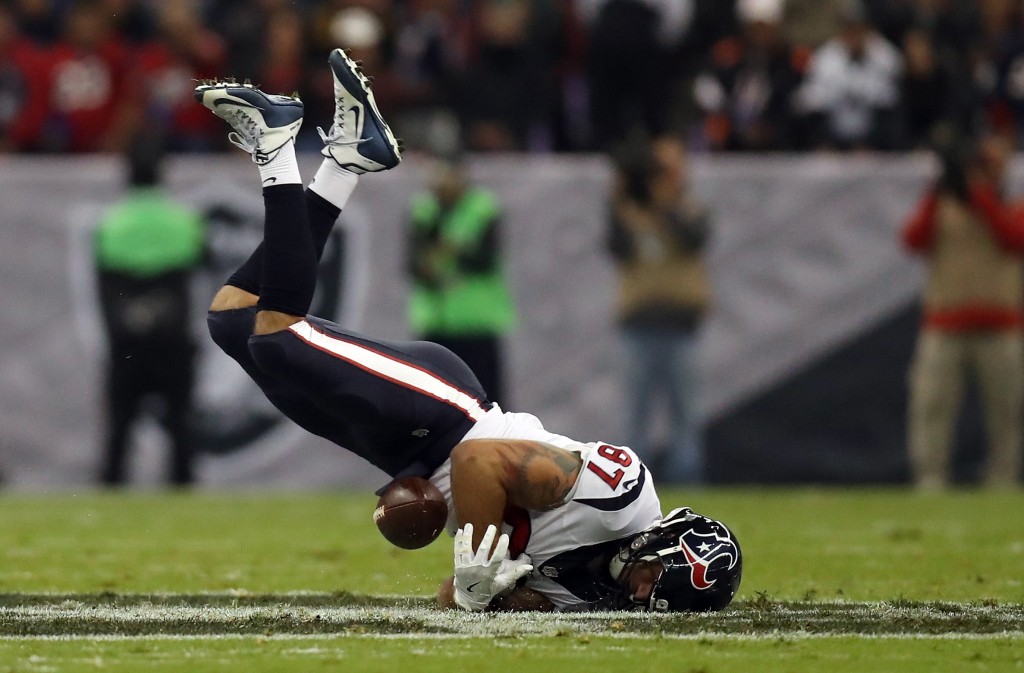 Both the New York Giants and Detroit Lions are clinging on to potential playoff spots despite playing some sub-par football at the weekend.

They say it is often better to be lucky than good, and that may hold true for both franchises, who overcame stubborn, if hardly stellar, opposition to remain interested in an NFC post-season place. The Giants weathered an early storm against Chicago, but were on the right side of fortune on several occasions as the Bears missed chances to turn the tide before first year HC Ben McAdoo won another fourth down gamble to put the game beyond reach.

Meanwhile, the Lions’ NFC North tie-breaker over Minnesota holds for at least one more week after two defense and special teams plays saw them past Jacksonville. That was despite an anaemic running game that saw attempts outnumber yards, leaving Matt Stafford to carry the offensive load with his arm (but not throw for a score) and the Lions to rely on an Andre Roberts kick return and Rafael Bush pick six for two-thirds of their touchdowns.

As Hunter S Thompson once noted ‘luck is a very thin wire between survival and disaster’ and, with playoff rivals breathing down their necks, neither team will want to spend the next six weeks walking that tightrope. (Craig Llewellyn)

When the schedule first comes out, one of the first things I check is the Thanksgiving slate and, let’s be honest, this year’s didn’t look great once the season actually began, a by-product of pinning hopes on the Detroit Lions and Dallas Cowboys minus Tony Romo.

How the picture has changed entering Week 11. I can barely remember a more exciting trio of fixtures for the American festive period. Detroit-Minnesota, Dallas-Washington and Indianapolis-Pittsburgh are three games with major playoff implications, featuring six teams all above .500.

So get your American feast, slippers and a comfy chair ready: a feast of food and football awaits! (Matt Sherry)

Oakland seem to have Lady Luck on their side this year, which can take you a long way. It’s the games they should win that this ill-disciplined team needs to be wary of.

We don’t care if their record isn’t as good, I’m taking Atlanta over any other team vying for this spot. Including the Raiders and Broncos, whom they’ve beaten on the road.

The defense looks really susceptible all of a sudden, but it’s hard to drop them when Tom Brady puts up 30 in a rain storm.

Russell Wilson is back to his playmaking, game-breaking best – and that spells trouble for the rest of the NFL.

Dak Prescott completed 14 of 15 passes in the second half against the NFL’s top-ranked defense on Sunday. He’s pretty good.