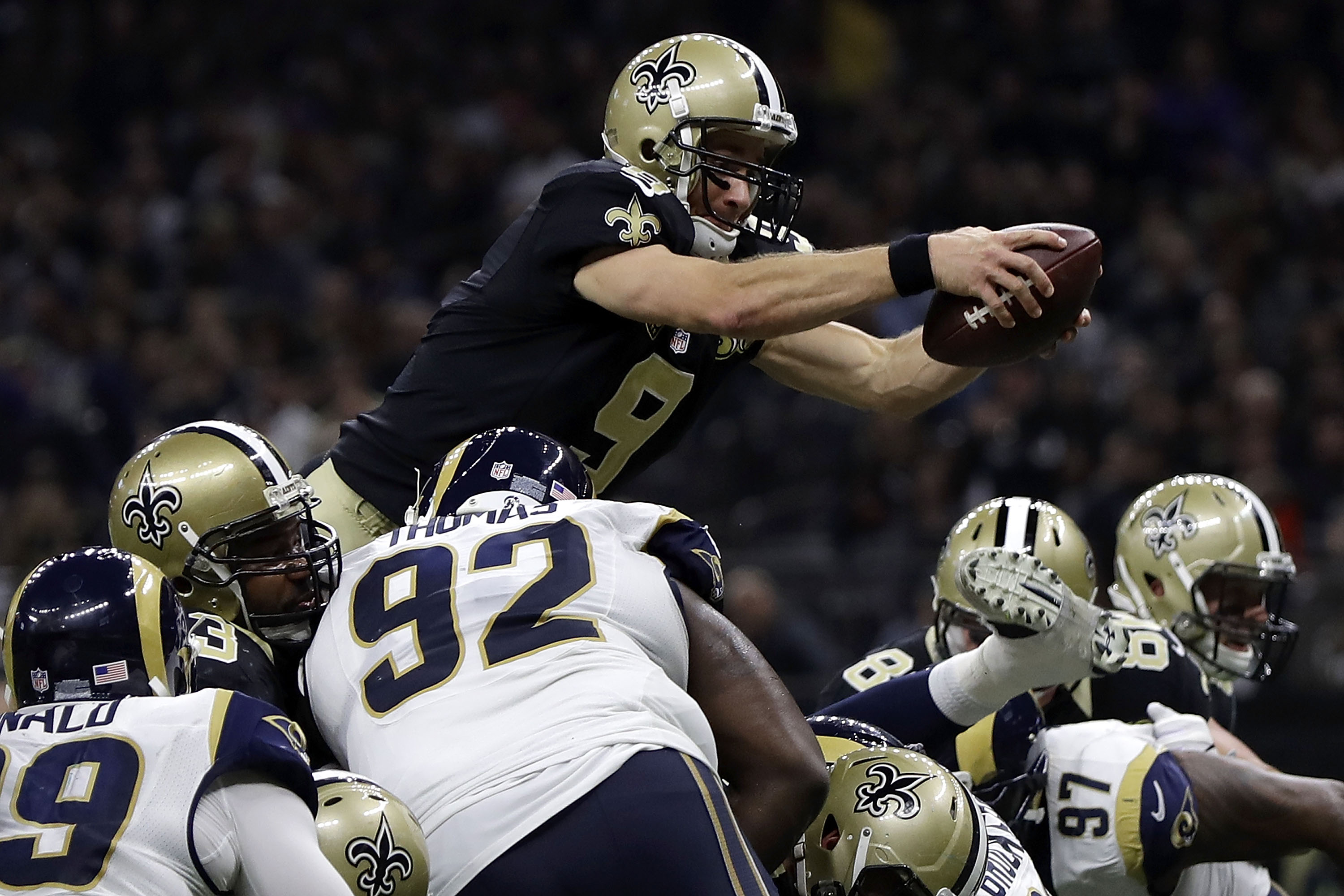 Having polished off the last vestiges of Thanksgiving turkey, the Gridiron team turn their thoughts to Week 12 of the NFL season for a fresh helping of Tuesday Morning Touchdown…

What a game Drew Brees had on Sunday!

In putting 49 points on a previously stingy Rams defense, he tallied up his 103rd career 300-yard game (most in NFL history) and kept himself him on pace for a ridiculous fifth 5000-yard season – no other player has more than one!He’s obviously a nailed-on Hall of Famer and, at 37, he’s recreating the late career form of fellow greats Peyton Manning and Tom Brady. He is the proud owner of no less than 19 all-time QB passing records, yet he so rarely gets mentioned as a possible Greatest Of All Time…. so why?

Maybe it’s the lack of post-season success – he’s 6-5 in January, has just the one title to his name and one other unsuccessful trip to the NFC Championship game. Maybe it’s because he’s never had a true rivalry like Manning/Brady to spotlight his ability – Matt Ryan is too inconsistent, Cam came along a little too late, and even though Kaepernick and the 49ers looked like they might represent a regular post season foe for Drew, the less said about that the better. Or MAYBE it’s the fact that, year on year, the Saints continue to have the same issues with a patchy defense that leaves them in a ridiculous number of shoot-outs and allows for the accusation of inflated stats.

Whichever it is, I will always feel like Brees maybe should be discussed as the greatest, but will always end up in the honourable mentions. (Will Gavin)

When we did our wide receiver rankings for the latest issue of Gridiron magazine, we put Tampa Bay’s Mike Evans eighth in the list. It was just recognition for an under-rated player that garners little attention plying his trade in a small media market.

It turns out we may not have shown Evans enough respect.

Through 12 weeks, he has the joint-most touchdowns, has only Julio Jones ahead of him in yardage and just became the fourth player in history to notch up a third-straight 1000-yard season upon entering the league. Evans has more targets than anyone in the NFL and, even with opposing defenses knowing he is Tampa’s offense, he still gets it done, hauling in two TDs as the Bucs shocked Seattle Seahawks on Sunday.

Richard Sherman could not stop him and, at times, not even three members of the Legion of Boom prevented him from snagging balls, with Jameis Winston not put off by such congested coverage. Mike Evans is a beast who should not be flying under the radar anymore. (Liam Blackburn) 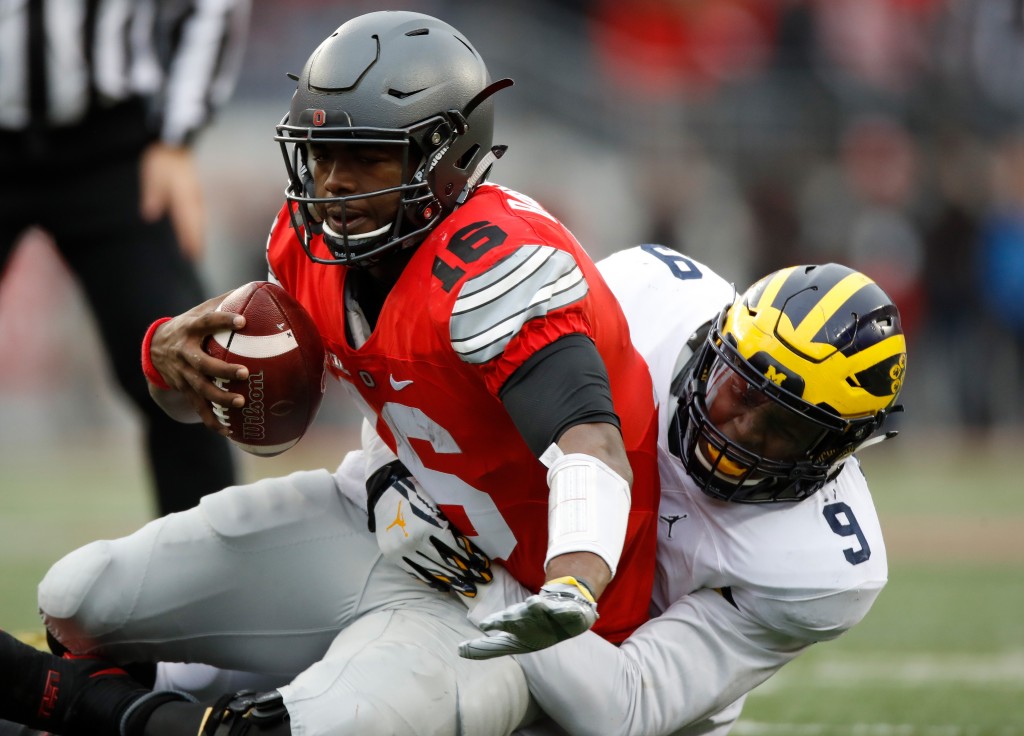 I’m taking a break from the usual NFL programming this week to bemoan referees at a different level, for the Michigan-Ohio State game was the latest in a string of high-profile affairs marred by poor officiating.

The coup de grace of the piece was Ohio State being controversially given a first down on a fourth-and-one play that looked short, and would have handed Michigan the win. Instead, the officials ruled in favour of the Buckeyes and Urban Meyer’s crew grabbed a win that secures their College Football Playoff spot and likely leaves the Wolverines on the outside looking in.

That this followed some dreadful spots in Mexico that we highlighted last week emphasises that top-level football has a problem – and it’s one that’s so fixable. In this era, should these crucial calls really be determined by a couple of men running around with chains, or is there not a better way? You know, like Hawkeye – which has been successfully implemented in an array of sports around the world. It’s staggering, given the money football generates, that nobody has thought to solve this issue. Hopefully, these recent screw-ups, in games with incredibly high stakes, force decision-makers into action. Hopefully. (Matt Sherry)

At first, it appeared that Josh Norman was spouting off to deflect attention from the fact that another result had not gone Washington’s way, just as he had in London last month, but look a little deeper and he might actually have had a point.

Norman, having already scratched Odell Beckham Jr off his Christmas card list, went at it with another NFC East wideout on Thanksgiving, jawing with Dez Bryant during the Cowboys crucial 31-26 win in Dallas and taking the on-field argument beyond the final whistle before both men tried to claim the upper hand on social media through the night.

Bryant insisted that he was ‘just wearing [Norman’s] ass out the whole night’, suggesting that Washington try to get their money back from the DB’s sizeable salary in an echo of a similar claim going the other way in 2015. Norman, meanwhile, insisted that he didn’t see what the beef was about, given that ‘it’s not a competition when the other person don’t show up’. What was less welcome was Norman’ insistence that the post-game spat was sparked by Bryant telling him that ‘Where I’m from, we unload the clip’, an obvious reference to gun violence. The claim was even more uncalled for when Norman admitted Bryant never uttered the words, changing his tack to suggest it was his own way of saying that his effort left everything out on the field.

Ironically, while it sounds like two egos rubbing each other the wrong way, investigating the numbers suggests that Norman – often seen as ‘all mouth and trousers’ – might actually have the upper hand when the pair were ranged against each other. Bryant has yet to score a TD against the corner in three games and has just 38 yards on four catches from a dozen targets against the self-proclaimed best cornerback in the league. Norman might be accused of not travelling to match-up with the league’s best, but when he does, he doesn’t do too badly. He just needs to find a better way of expressing himself. (Craig Llewellyn) 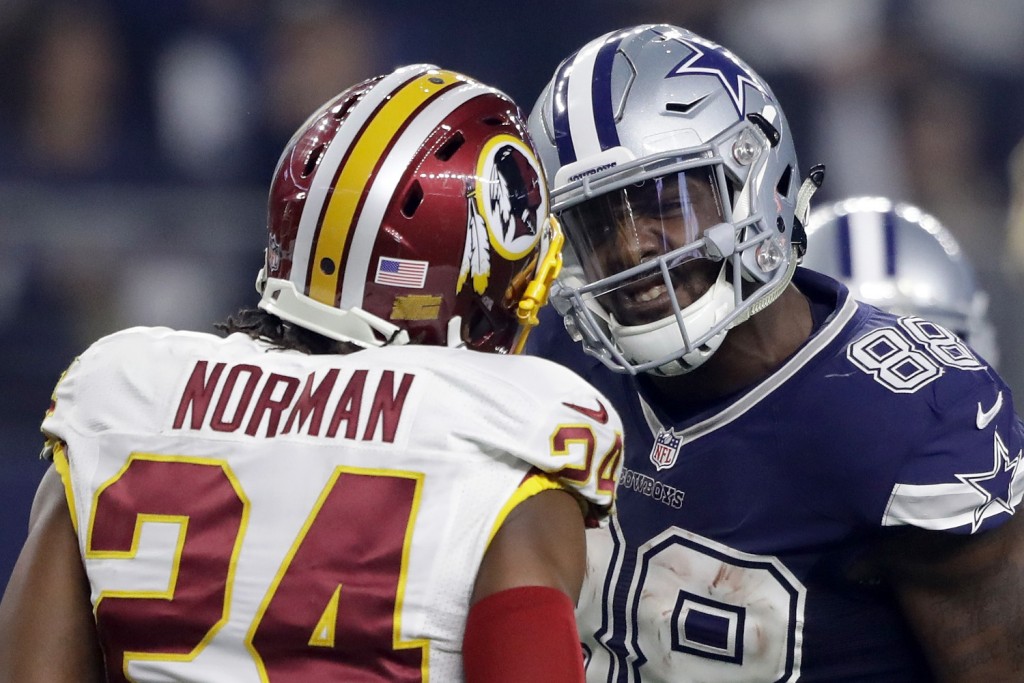 Last week, to paraphrase one William Shakespeare, we ‘came to bury kickers, not to praise them’ but, just a handful of days on from the infamous slate that saw an NFL record 12 PATs missed across the league, Detroit’s Matt Prater showed why he, at least, can still be considered ‘money’.

Yes, the ten-year veteran still has the annoying habit of missing the odd point after, but give him a clutch situation, and he never fails to amaze. Given the way the Lions’ 2016 season is going, that is a good thing, as Prater has now made four game-winning kicks to help his team to an unexpected 7-4 record and top spot in the NFC North. Moreover, the 32-year old is perfect – yes, 100%, completely, totally, utterly perfect – in clutch situations, having converted 25 straight three-pointers to tie or lead a game in either the closing moments or overtime.

Prater had to kick the tying 48-yarder twice against then Vikings on Thanksgiving, having been iced by Mike Zimmer on his (successful) first attempt, but landed the do-over and then stepped up to do the same from eight yards closer less than a minute later, after Darius Slay’s interception gave the Lions the chance to snatch victory from the jaws of overtime.

He still holds the NFL record for distance after landing a Mile High-assisted 64-yard field goal during his Denver days, and even tried persuading the Lions’ coaching staff to let him attempt one from 67 at the end of the first half of Thursday night’s indoor encounter at Ford Field. No-one trusted him quite that much then but, when the game – and a potential playoff spot – was on the line… (Craig Llewellyn)

Incredibly, with five weeks left in the regular season, we could be looking at an NFL playoff picture without three of the four teams that contested last year’s conference championship games.

While the plight of both Arizona and Carolina is well known, Denver’s inability to overcome Kansas City in overtime on Sunday night may just leave the seemingly unshakeable Patriots as the only one of the quartet to make the post-season this time around. The Broncos’ fate may ultimately hinge on asking Brandon McManus to convert a 62-yard field goal instead of either going for it on fourth-and-10 or punting the ball and pinning KC deep in their territory, effectively ensuring a tie.

Despite the league’s longest-ever field goal coming in the same stadium, and from only two yards further back, McManus missed wide left, and the Chiefs completed a drive with a much shorter kick, albeit one Cairo Santos banked in off the left upright. The failure to convert leaves Denver seventh in the AFC pecking order, now behind Miami, and trailing both the Raiders and Chiefs in division.

It wasn’t all bad news for the Broncos, however, as QB Trevor Siemian showed that the franchise may not need to sound out veteran help going forward. The second year signal-caller put up 368 yards and three touchdowns through the air, despite taking a battering before half-time, and had Denver in front down the stretch. Mile High had been tipped as the preferred destination for one Tony Romo, but he might want to look elsewhere if Siemian continues in this vein. (Craig Llewellyn)

After all that we said about Oakland last week, Sunday’s win over the Panthers had more to do with guts than luck and that, with Derek Carr playing through the pain, is enough to stick here.

Okay, so the Falcons’ D is still a cause for concern, but Matt Ryan has that offense purring (if birds can purr!) and that should make Atlanta more than a match for most.

It might be a bit harsh to demote the ‘Hawks for slipping up against Tampa Bay but the Bucs made Seattle look ordinary on both sides of the ball. Expect it to be temporary.

Despite Tom Brady hobbling and Gronk heading for the locker room (without Martellus Bennett as an effective back-up), the Patriots still ‘did their job’ against a rival always up for a scrap.

‘Deke’ did their thing to take the Cowboys past possibly the toughest opponent left on their schedule. Is it now a question of how long the streak can last?