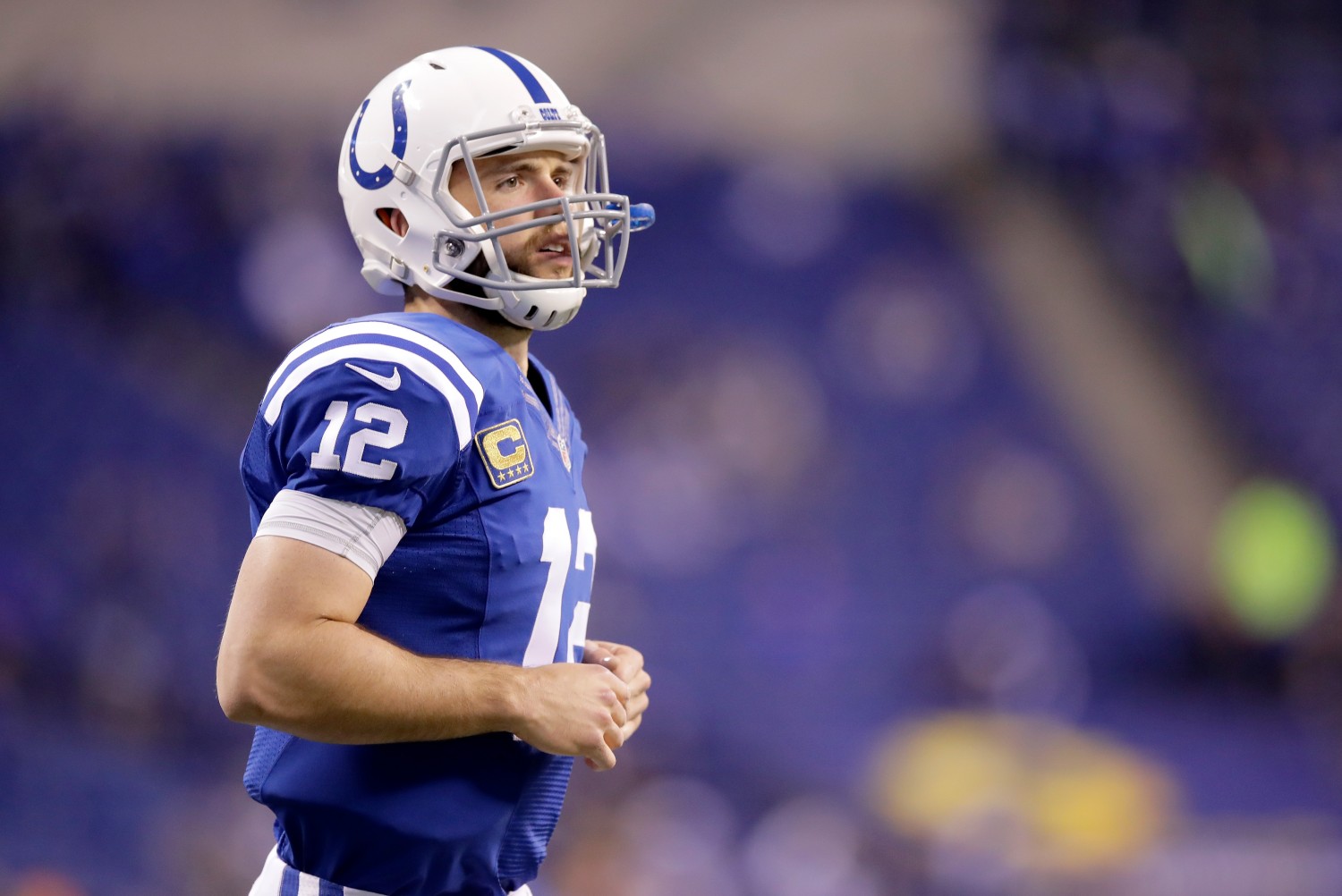 Having seen its regular slot hijacked by the announcement of next year’s London games, the Gridiron team give a belated take on Week 14 for the latest Tuesday (Wednesday?) Morning Touchdown…

They shoot horses don’t they?

If ever there was a microcosm of why the Indianapolis Colts have been so bad under Chuck Pagano and Ryan Grigson, it was Sunday’s do-or-die home game against a reeling Houston team.

With Indy seemingly driving for a go-ahead score in second half, facing third-and-goal from the three-yard line, the Colts lined up tight-end Dwayne Allen against stud pass-rusher Jadeveon Clowney. The result? A strip-sack that wiped points off the board and preceded a Houston field-goal drive. That is a monumental coaching error in a big spot and also a mistake by Andrew Luck. He has to see that pre-snap and adjust the protections. As if to compound matters, with Indianapolis facing a must-have fourth-and-one in the fourth quarter, offensive coordinator Rob Chudzinski called a screen pass. That is idiotic; your call should have multiple potential chances of success. Not one. The Texans snuffed it out – and the game was over.

The errors were in coaching and quarterbacking, and compounded a dreadful game from Luck – who simply isn’t the guy he’s billed as yet. This has been his best year as a pro by far, but coming up small in a big spot – the quarterback also threw two dreadful interceptions – isn’t a good look. However, it’s hard to assess the dreadfully-assembled Colts team and pinpoint him as the main problem. It’s been a catastrophic failure in personnel and coaching, and you have to think Grigson and Pagano have run out of chances. (Matt Sherry)

There was a certain sadism to the timing of the Los Angeles Rams’ announcement of Jeff Fisher’s firing the day after the day he tied the NFL record for the most losses in NFL history with his 165th.

It was almost fitting to be honest, a career loser as a head coach rising to such a lofty status before finally being canned. The reality, though, is Fisher’s impressive ability to play the political game and suck up to league officials means we may not have seen the last of him.

If he doesn’t wind up in some cushy role on Park Avenue, look for another silly team to roll out the red carpet and give him another chance. And we support them in that: a double-century of losses. That’d be quite something. (Matt Sherry) 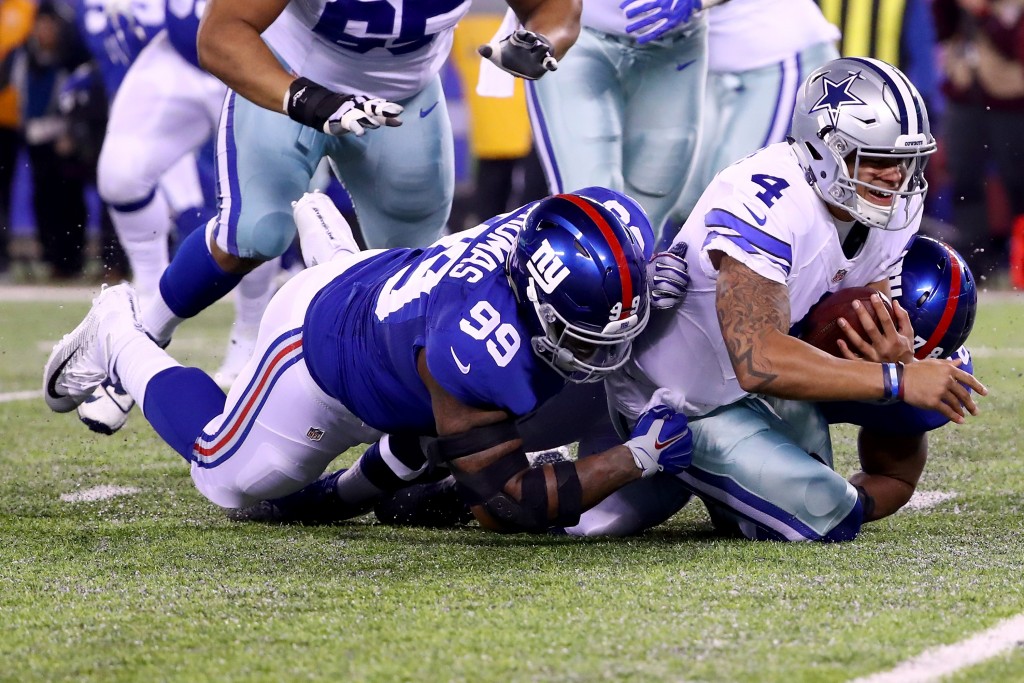 Dallas Cowboys fans are advised to lock up their doors, for there are thieves among them.

The perpetrators of the crime-to-be wear blue and hail from the Big Apple, and might just be poised to steal the NFC East crown from their Texas rivals. The only team to beat the Cowboys this year, the Football Giants have now done so twice, and will hold any tie-breaker over Dallas should their records converge between now and the end of Week 17.

Big Blue closed to within two games of the Cowboys with a narrow 10-7 victory in a chilly MetLife Stadium late on Sunday, but did so by taking the D to Big D – harrying Dak Prescott and stalling Zeke Elliott – because their own offense again lacked any real punch. Dallas, for their part, also lacked much in the way of offensive threat but brought a better-than-expected resistance, with Sean Lee turning in an All-Pro performance to match everything Olivier Vernon and JPP-replacement Romeo Okwara threw at his rookie team-mates, in a game littered with turnovers and punts.

While NYG’s season appears to be backing into the ascendancy, however, Dallas needs to guard against stumbling into the post-season. After two lacklustre games against decent defenses, a third looms large – and again on national TV – with the rampant Bucs heading for Arlington this weekend. Lose that and a wildcard game will be the spectre hanging over the shoulder of Dak and Co… (Craig Llewellyn)

Seeing the variety of MVP and Coach of the Year suggestions over the last few weeks, one thing becomes clear: Bill Belichick and Tom Brady have to do more than others to win.

It’s understandable, given their unrelenting success and the age-old debate of which is more important; if anything, they hinder each other’s chances. When the Patriots went 3-1 without Brady, conventional wisdom suggested Belichick had to win provided New England were New England the rest of the way. All that’s changed since then, despite the Patriots losing just one more game – in a fixture where they were on the opponents’ one-yard line with a chance to tie at the end. And yet, now I’m reading about Ben McAdoo. Really?!

As for Brady, there’s just the small matter of 22 touchdowns to 2 interception – TWO! – that is being ignored. If New England goes unbeaten the rest of the year without Rob Gronkowski, and Brady continues to play mistake-free football, there is no doubt in my mind who should get the nod. But I won’t hold my breath. (Matt Sherry) 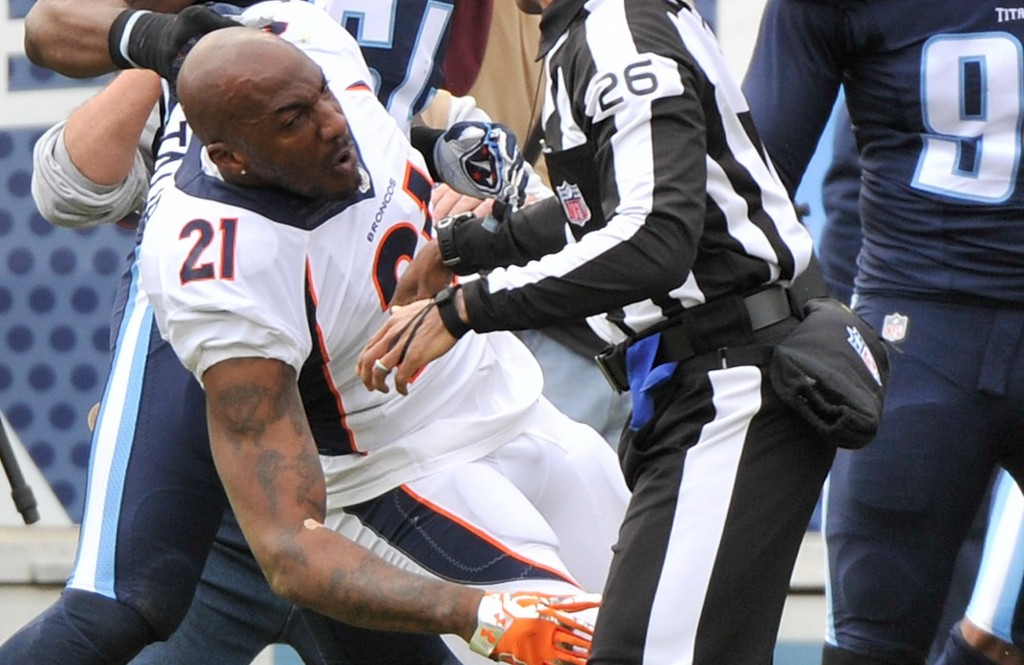 There was a distinct lack of festive cheer and goodwill to all men at times in the Titans-Broncos showdown, particularly after Harry Douglas’ helmet-first low block on Denver corner Chris Harris Jr.

Tensions were already running high amongst the defending champions, having fallen behind to Marcus Mariota’s inspired Titans, and Douglas’ attempt to take his rival out of the play, while legal, was the final straw. With the officials powerless to punish Douglas’ direct hit on Harris’ knee, Aqib Talib (who else?) added a twist to the ‘Dirty Harry’ storyline by dishing out his own brand of vigilante justice, riding the Titan over the Tennessee sideline before taking the scuffle to the floor.

While Talib was penalised for the retribution, he – and a lot of others – will rightly feel it was worth it. There is no place in football for low blows like the one that threatened Harris’ knee (and career?), whether legal or not. After his altercation with Talib, Douglas should now take another hit, this time in his pocket when the NFL catches up with its fines book.

The game, meanwhile, resulted in a narrow Titans win and could mark a turning of the tide for both teams’ playoff hopes, with Tennessee putting themselves firmly in the AFC South mix alongside a sorry Houston squad, while Denver continues to play-catch up on KC and Oakland in the West. (Craig Llewellyn)

For all the credit ‘Black Jack’ Del Rio has been given following Oakland’s sensational start to the season, I’ve never quite been a believer.

He is a better head coach than defensive coordinator, but that’s not saying much. My gut feeling is that, when it comes down to the biggest games with the smallest margins, Del Rio will be a thorn in his own team’s side.

Andy Reid outcoached him on Thursday night and, while that is no disgrace given the quality of Kansas City’s leading man, I can’t help but think there are a few other guys stewarding AFC playoff contenders who could do a similar number on Del Rio.

The easier excuse for Oakland, and Derek Carr’s, dreadful performance – 17-of-41 for 117 yards – in the huge Thursday tilt between Oakland and KC is the QB’s poor pinky. However, of greater concern would be whether Carr, and his team, can hack it in cold weather – for there is lots of that in some of the stadiums they could be forced to travel to in the playoffs. Carr has played twice in sub-40 fahrenheit temperatures – and lost both times. That obviously isn’t a huge sample size, but bears watching going forward. (Matt Sherry)

We haven’t been believers all year… until the Packers totally annihilated the Seahawks. Aaron Rodgers is back, and there isn’t a team who wants to see the Pack in the postseason.

What the heck has happened to that defense? It’s the best thing about this surging team and, given Jameis Winston and Mike Evans’ connection, that is really saying something.

We’d usually think of Kansas City as a nice team who won’t win the big one in January. But Tyreek Hill is an X-factor they haven’t had before. The Chiefs look legit.

With another offensive showing like the last two against the rampant Bucs on Sunday Night Football, the Cowboys might well turn back to Tony Romo…

Ignore the 30-23 scoreline, for New England’s win over Baltimore might have been the most dominant seven-point win of all-time. Without two ST errors, they might have won by 30.