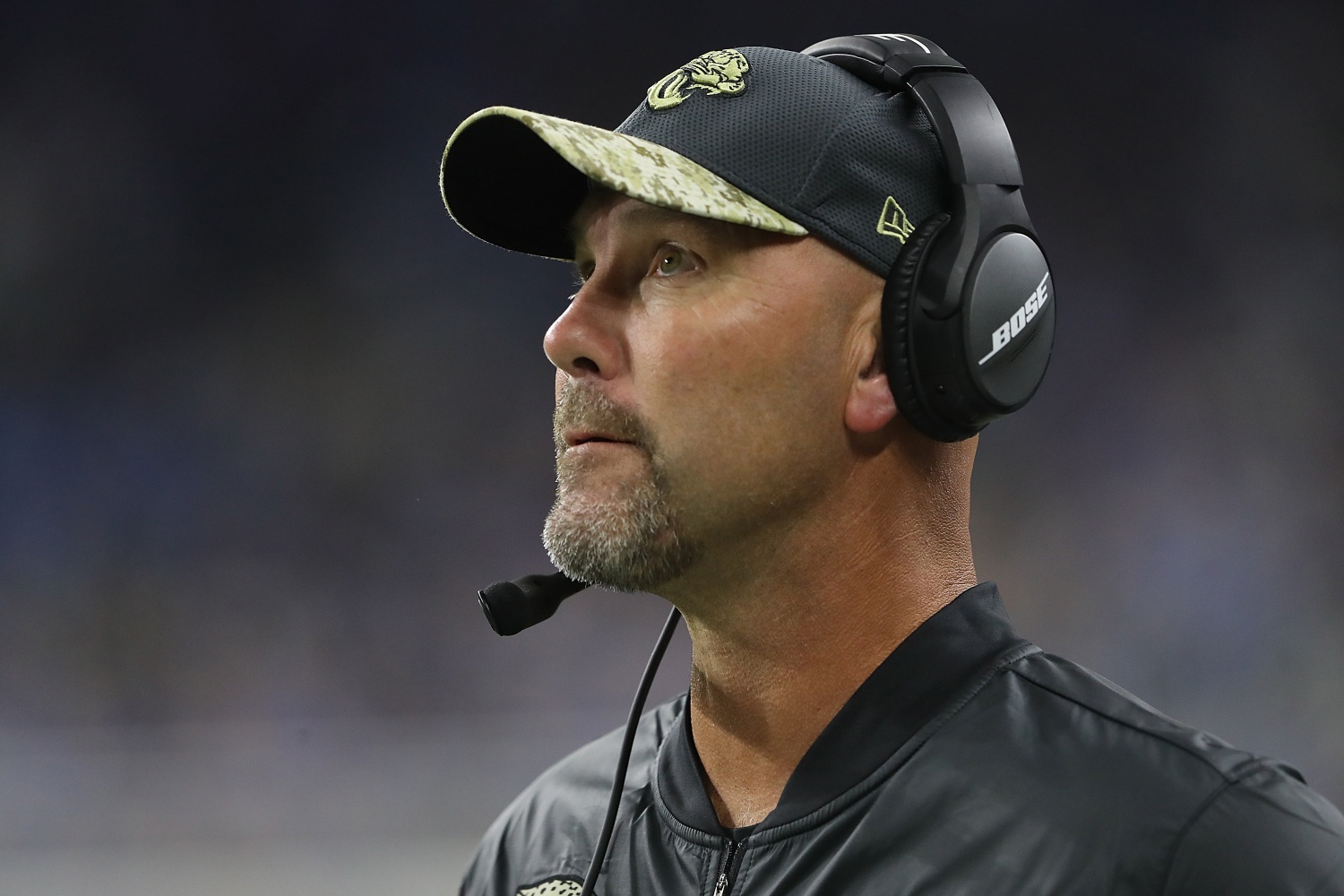 The festive period isn’t stopping the Gridiron Team. The lads offer their unique takes on the week’s NFL action…

The firing heard around the NFL

The tenure of Gus Bradley was viewed with great interest around the NFL as the Jacksonville Jaguars broke the mould by giving the former Seattle defensive coordinator a long opportunity to prove himself.

In many ways, the approach was welcome as Shad Khan shunned the convention of firing his head coach at the first opportunity. As such, his reluctant decision to fire Bradley, whose 14-48 record is one of the worst in NFL history, felt significant – for his tenure now flies in the face of the idea that owners must give coaches multiple years. Had Bradley worked out, the ripple effect around the league could have been significant – with many others potentially being given more time. Unfortunately, Bradley’s disastrous tenure can now be pointed to as an example that stability doesn’t always work. (Matthew Sherry)

Ty learns on the fly

He was drafted in 2015 as a receiver, started the season in that position and wears #88, a wide-out’s number. But make no mistake, the Green Bay Packers’ Ty Montgomery is making waves as their No. 1 running back.

In the Packers’ 30-27 win over the Bears, Montgomery had his breakout game. He had notched 86 yards on 12 carries, and a TD, the week before against the Seahawks, but it was at a freezing Soldier Field Montgomery really made a statement by racking up 162 yards, including an astonishing 156 after contact, on 16 carries with two TDs. Montgomery has that receiver agility and patience but, at 220lbs, running-back strength and power.

Montgomery’s emergence as a regular in the backfield for the Packers has given their offense a balance not really seen since Eddie Lacy was knocking down defenders in 2014. Aaron Rodgers, even with calf and hamstring issues, looks far more comfortable having a dependable running game (Christine Michael also gashed the bears on a 41 yard TD). This dual threat of one of the most exciting new running backs in Montgomery and one of the best quarterbacks in football in Rodgers throwing to an improving supporting cast means no team would want to face the Packers any time soon. (Olly Hunter) 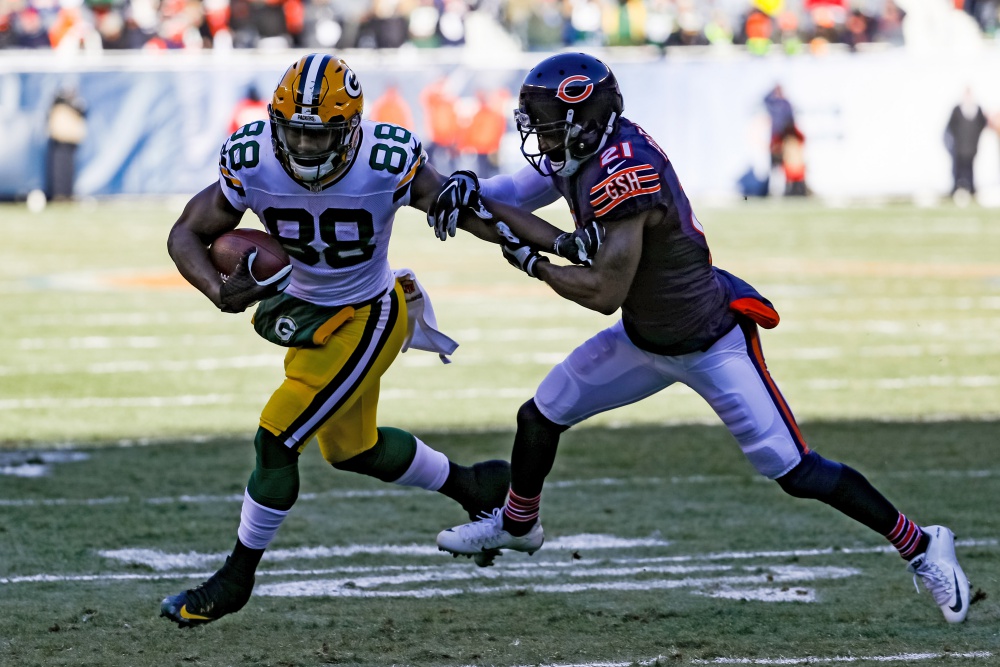 They say the NFL is a copycat league, but news surely didn’t travel fast enough to persuade two different teams to try two-point fourth-quarter conversions when a relatively simple kick would have ensured parity. Both the Titans and Eagles appeared to have blown chances to take their respective games to overtime after touchdowns brought them to within a point of drawing level with their Week 15 opposition, but what happened next perhaps exemplified two diametrically-opposed seasons.

Where Carson Wentz’s batted two-point attempt came as time expired and ensured that another frustrating Eagles campaign would not go beyond Week 17’s meeting with the Cowboys, Mariota’s similar failure at least came with three minutes on the clock, allowing the Titans to wrest the ball back from Kansas City and defy arctic Arrowhead conditions to drive back down the field for the win. (Craig Llewellyn)

Tennessee’s win didn’t come without additional late drama that left kicker Ryan Succop more than a little emotional. In his post-match interview he cried, thanked god, his team and EVEN said he was proud to be a Tennessee Titan – a sentiment rarely echoed around Nashville in recent seasons.

He’d just kicked a walk-off field goal against his former team to send his current employers to 8-6 and closer to a first playoff appearance in seven years. So his emotion was understandable, especially considering he initially missed the 53-yarder in -9F temperatures and had been reportedly thinking to himself: “If I had 10 kicks from here, I don’t think I could make one. Not on a day like this.”

But he was saved thanks to one of my biggest NFL pet peeves: Chiefs HC Andy Reid had ‘iced the kicker’. You could see the regret on Reid’s face immediately; he’d just given a talented kicker a practice effort at a very difficult FG in horrible conditions – what a great early Xmas present! Icing the kicker might occasionally work if a man who should have ice in his veins has a complete brain fart, as with Graham Gano on the opening night of the season. But particularly at this stage of the year, when extenuating factors make kicks much tougher, stop giving kickers help! (Will Gavin) 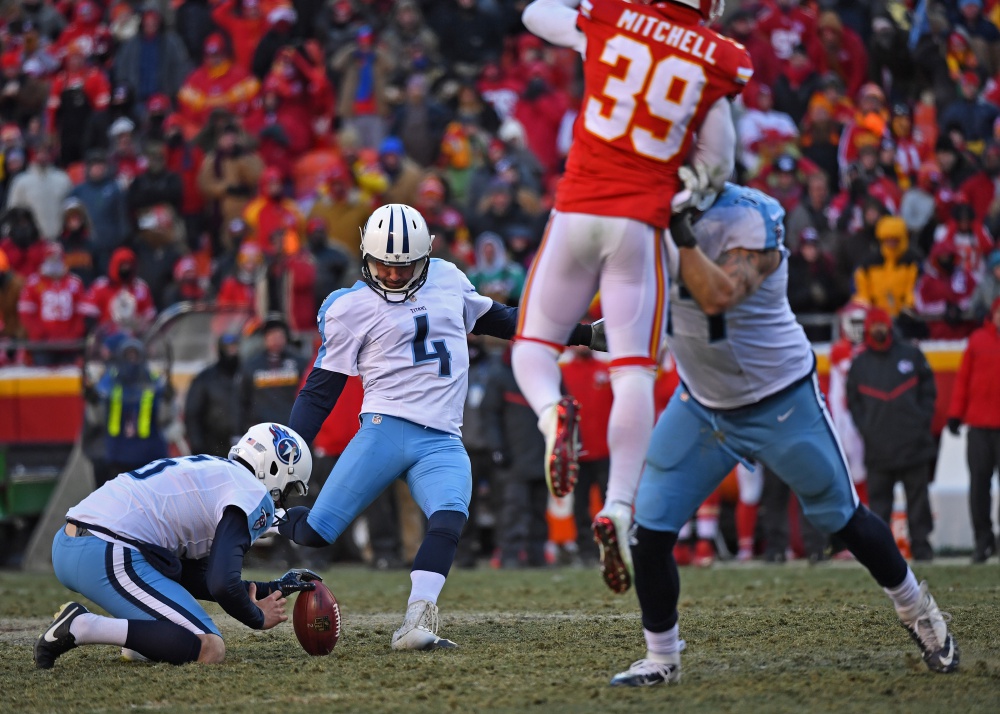 TMT has done its share of Ram-bashing this season but, in another case of the disenfranchised franchise not really thinking things through – witness Jeff Fisher’s contract extension and the cost of drafting Jared Goff at #1 – Thursday night’s Colour Rush uniform proved far from satisfactory.

Yes, there have probably been worse colour choices (I’m thinking of you, Jacksonville!), but LA’s decision to replace last year’s nuclear mustard – due to its migraine-inducing proximity to the Seahawks’ (s)lime green – by pairing throwback blue-and-white helmets with TNF takes on modern-era jerseys, complete with gold trim, still proved irksome.

Not as annoying as the Rams’ offense, mind you, which again failed to generate much against a Seahawks side that has too often been dragged down – and succumbed – to LA’s brand of ugly football. While the D generally acquitted itself well for two quarters, rookie Michael Thomas had already dropped a surefire TD bomb, and Todd Gurley had been largely stymied, by the time Case Keenum replaced the bell-rung Goff in the final quarter, and the Rams were left to count on Greg Zuerlein’s first-half field goal for their only points of the game against the now division champs. (Craig Llewellyn)

It sure was cold outside but it beggared belief to see the Vikings freeze against Indianapolis: 27-0 behind at one point, this marked the nadir of the Mike Zimmer era. Adrian Peterson used Dash Radio, a digital platform of which he is an investor, to bally hoo his return from a meniscus tear. Against one of the NFL’s worst run defenses, he mustered 22 yards from six carries.

Needing to win to stay in the playoff conversation, the game swung on two moments: Linval Joseph was flagged for leverage on a short field goal, leading to a fresh set of downs and the game’s opening touchdown. Then there was Peterson’s main contribution, a fumble in the red zone when trailing 17-0.

Credit to Colts offensive coordinator Rod Chudzinski for keeping the Vikings’ defense on the back foot. Frank Gore rushed for 101 yards and an offensive line featuring three rookies kept Andew Luck unscathed. Since going 5-0, the Vikings offensive line and lack of a running game has cost them dear. And even though defensive lynchpin Harrison Smith was missing again, Zimmer will be devastated after his much-vaunted defense failed to show. (Pete Carline) 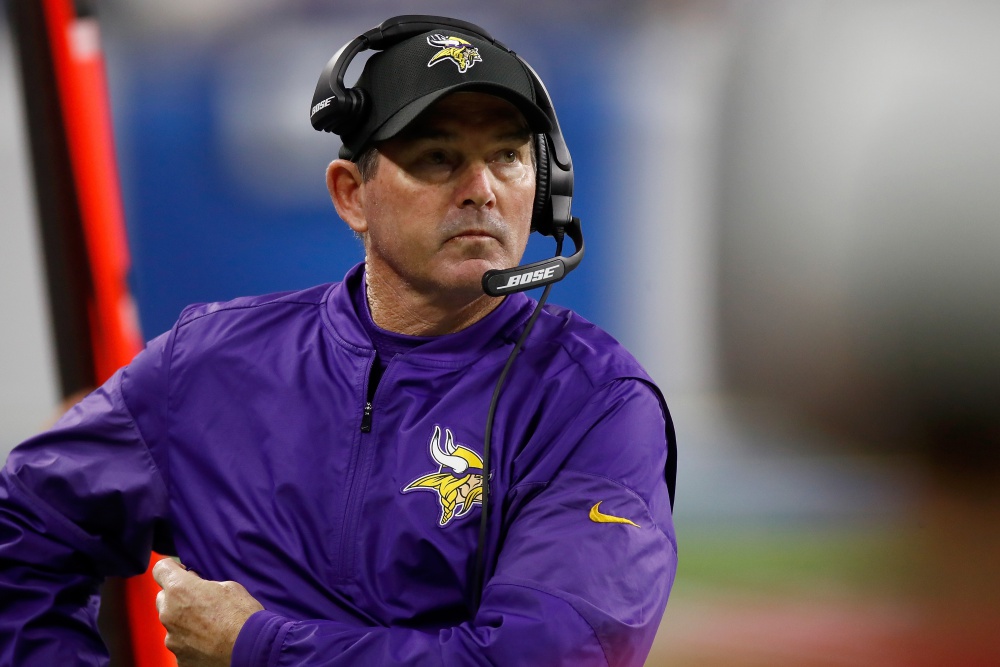 Everybody outside of New England seems to be faltering, paving the way for Seattle’s rise. They are mentally tough, which is more than can be said for some.

Hard though it is to ignore the manner in which Green Bay let Chicago back into that game, Aaron Rodgers is looking pretty good again…

Right, now we believe. Their offense is dreadful, but that defense is as good as any in the NFL. As we saw last year, an elite D can take you a long way.

Quite the bounceback from Dak Prescott against a Tampa Bay team on the crest of a wave. Completing 32 of 36 passes ain’t to be sniffed at.

Back-to-back wins against Baltimore and Denver, the second in a short week, suggest New England are legit. And there defense is No.1 in the NFL in points allowed.