There were enough stand-out performances, surprise results and close calls in Week 3 of the new NFL season to give the Gridiron team something to get their teeth into for another Tuesday Morning Touchdown…

Coaching matters in the NFL, folks. Now that is hardly breaking news, even if I have seen lesser stories adorn the Sky Sports News ticker, but it’s really more evident than ever. It’s why the Minnesota Vikings are suddenly darlings of the league, poised for a run at the biggest prize. Their outstanding leading man, Mike Zimmer, was just one of the many who caught my eye over a fascinating weekend of upsets and, most importantly, coaching clinics.

Zimmer and his staff put together yet another brilliant gameplan against Carolina. To go into that building and restrict Cam et al to just 10 points is no mean feat, nor is going 2-0 in back-to-back games against the Packers and Panthers despite your quarterback having so little time to learn the system. That’s good coaching, and there was lots of it around in Week 3. Credit also goes to Bill Belichick for a brilliant, suffocating performance against Houston that brought a 27-0 shutout in a game they entered as underdogs. What Belichick et al, in particular offensive coordinator Josh McDaniels, have done sans Tom Brady so far has been truly staggering.

But so, too, has the work of two new head coaches: Doug Pederson and Hue Jackson. I had my doubts about the former, but he has been the pleasant surprise of the season manning an Eagles team who are 3-0 following their dominant win over a Pittsburgh team that sat atop many power rankings. Philly is flying and, while Carson Wentz deserves a lot of credit, so too does Pederson. As for Jackson, he is at the controls of easily the NFL’s least-talented roster and, following a poor Week 1 showing versus an Eagles team we now know is much better than advertised, has made Cleveland competitive. The Browns basically had that game in Miami won, and that’s thanks to Jackson who, lest we forget, is without his first two quarterbacks! It’s remarkable the Browns aren’t losing by 50 every week. (Matthew Sherry)

Whisper this or someone might hear you, the Vikings defense is legit.

Actually it’s a growing feeling in the NFL; you could shout it from the roof of Lambeau Stadium and even Packers fans wouldn’t argue. After restricting Green Bay to 14 points last week, Minnesota’s defense swept into Carolina and steamrolled the Panthers in every conceivable way. After going 10-0 down, the wrecking ball that is defensive end Danielle Hunter (no relation) swatted aside the hapless Michael Oher and unceremoniously threw Cam Newton to the ground for a safety, sparking a turning of the tide. Newton was hit 12 times, sacked on eight of them, threw three interceptions and, other than a first-quarter rushing TD, was unable to get anything on the ground.

The pressure from Mike Zimmer’s defense was relentless  – QB hurries, disguised blitzes and run-stuffing – while the secondary, with its tight coverage of Kelvin Benjamin, stifled and frustrated Newton. So yes, this defence is legit. Going back to last December, it has restricted seven straight opponents to less than 17 points, including Eli Manning, Russell Wilson, Aaron Rodgers (twice) and now last year’s league MVP. Eli and the G-Men are back in town this Sunday, so we won’t have to wait long to see if the Vikes are really on the road to another NFC North title – and maybe more. (Olly Hunter) 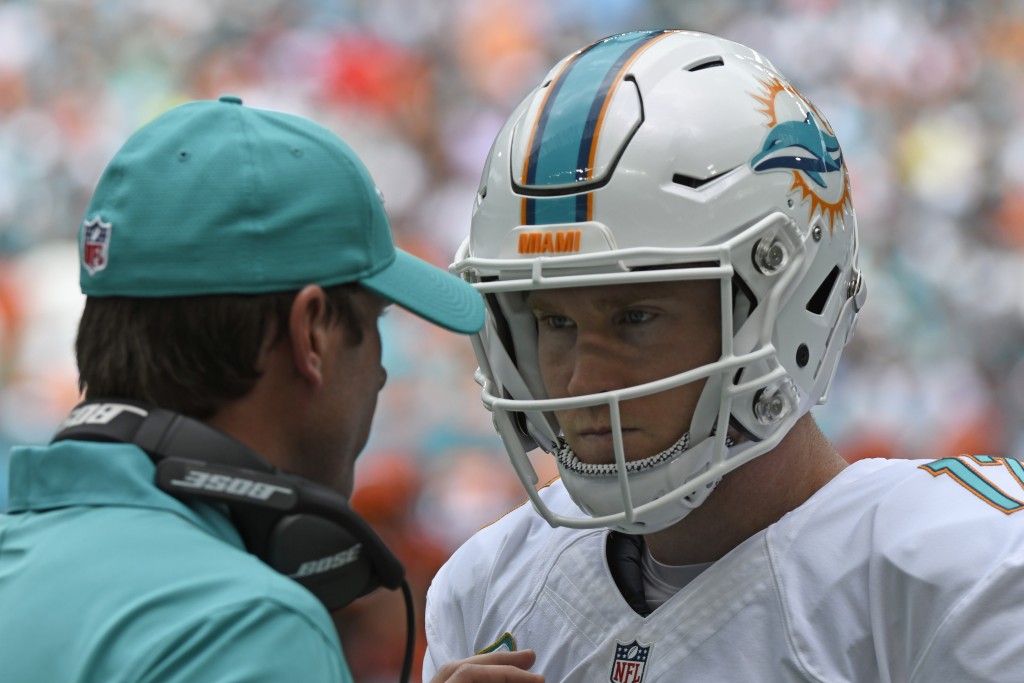 As the late-afternoon shadows fell awkwardly through the new stadium canopy onto the field at Miami’s Hard Rock Stadium, one man was out throwing strikes to a lone receiver in the end zone. But it wasn’t Cleveland’s unlikely pairing of Cody Kessler and Terrelle Pryor, who’d almost contrived to steal an unlikely win from the stuttering Dolphins. And nor was it Ryan Tannehill, who could perhaps have used the extra reps after another frustrating performance under centre: intercepted on his first pass of the day by former teammate Jamar Taylor, before throwing a pick-six to debutant Briean Boddy-Calhoun, then bouncing back with a number of terrific throws, notably to Jarvis Landry, to set up Jay Ajayi’s overtime winner.

It was actually me throwing passes to Mike Tannenbaum’s nephews as the Dolphins’ executive vice-president of football operations stood watching on as he chatted to a reporter. The conversation was light and Tannenbaum was coy when asked about the performance of Tannehill. But the man who gave the former Texas A&M passer a $77m contract last offseason must be beginning to question that decision if the team suffers through many more Sundays like that. In the locker room after the game, teammates left the QB alone as he walked from his locker to the shower. Standing in front of the lectern before the gathered South Florida media a few minutes later, Tannehill talked about having to “clean up some things” in practice this week. But can you polish inconsistency?

There’ve been times when he’s looked every bit the franchise QB that the Dolphins hope he becomes. And he rarely gets the praise he deserves for strong games and great throws, in part because he’s unable to take that next step up. And so you have to wonder fairly seriously, in year five, if he ever will. True, it’s only been three games under new head coach and passing guru Adam Gase, so plenty can change and there was much to be encouraged by in the two opening defeats on the road in Seattle and New England. But yesterday’s win was a microcosm of Tannehill’s career in Miami, and Tannenbaum and GM Chris Grier may face some uncomfortable decisions in the offseason. If that is to be the case, at least Tannenbaum saw the future throwing passes to his family after the game. Didn’t he? (Simon Clancy)

The days of the New Orleans Saints being a perennial contender are over. There was a not-so-pleasant irony in the air as the Saints, in a game celebrating the 10-year anniversary of their reopening of the Super Dome, were beaten comprehensively by their bitter-rival Atlanta Falcons in a building that has gone from  Fortress to House of Horrors. The 45-32 defeat to the Saints on Monday Night Football – which leaves the team 0-3 – was New Orleans’ 11th loss in their last 15 home contests, a staggering turnaround from the halcyon days of going 8-0 in 2011 and 2013. When you have Drew Brees at quarterback, it’s simply not acceptable and, while much of the blame should be laid at the door of Mickey Loomis’ cap management, Sean Payton deserves equal criticism. The pair, put simply, are wasting the Twilight years of Bress’ storied career. (Matthew Sherry) 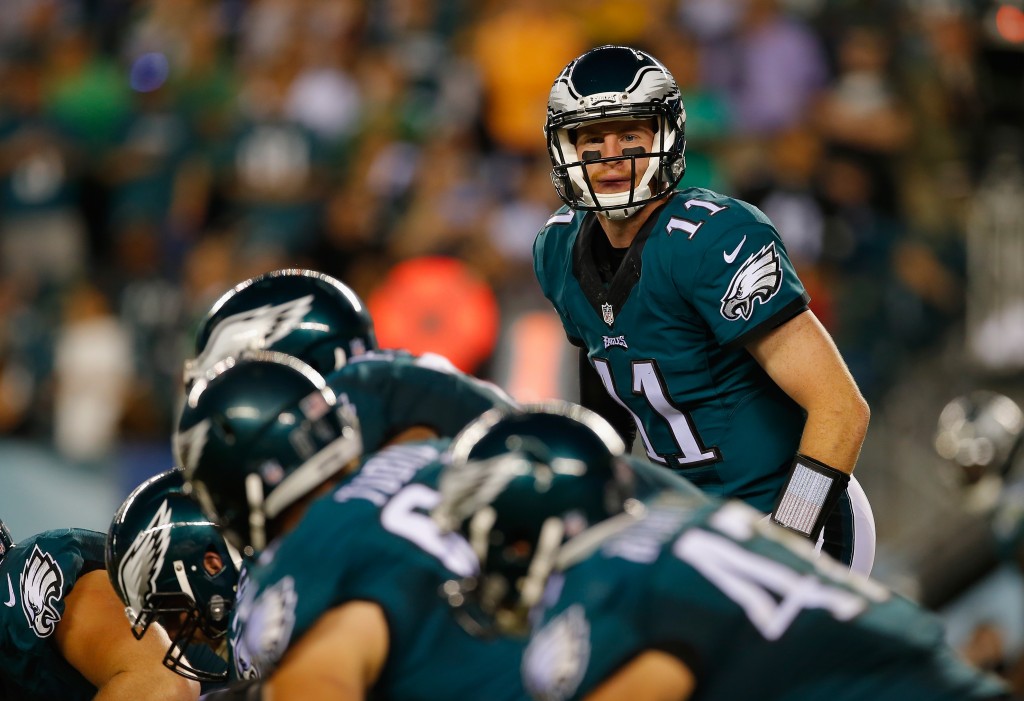 Truth or not, it looks increasingly like Philadelphia Eagles management knew what they had as they kept Carson Wentz under wraps in the preseason, lest they give the rest of the league a heads-up on his potential.

Prior to Week 3, the whispers were that the rookie QB out of North Dakota had only faced Cleveland and Chicago and that he would get his comeuppance as soon as the Eagles faced the equally unbeaten Pittsburgh Steelers in a Keystone State showdown. Instead, Wentz out-Roethlisberger’d Ben Roethlisberger – the man he was repeatedly compared to pre-draft – by guiding the Eagles to a 34-3 rout, going 23 of 31 for 301 yards and a couple of touchdowns. On top of that, his record-setting poise has yet to yield an interception in three games and his running game looked a lot less likely to put him in a hospital ward than previously.

Could a bye week come at a worse time? (Craig Llewellyn)

Anything you can do…

Determined not to be outdone by his rookie rival, Cowboys QB Dak Prescott extended his own career-opening streak without an interception as Dallas downed Chicago 31-17 to win their first game at home in more than a year.

The Mississippi State product completed 19 of 24 pass attempts for 248 yards, taking his tally to 99 attempts without an interception in three games, while adding a rushing touchdown – becoming the first Cowboys QB to run for six in consecutive games since a certain Roger Staubach – and finally putting a passing TD on his resume after connecting with Dez Bryant in the fourth quarter. More importantly, Prescott is clearly gaining the respect of his offensive line as the Cowboys remained within one game of the NFC East lead.

While the ‘Boys revelled in a return to winning ways at Jerry World, however, a shadow began to loom amid news that Bryant might need an MRI on an injured knee. While Messrs Witten, Beasley and Elliott have proven adept at aiding Prescott’s development, everyone knows the cost of Bryant’s absence last season. A repeat would be bigger than any potential quarterback controversy in Big D… (Craig Llewellyn)

So the first International Series game is here – and what looked the most exciting slate we’d ever had begins with an 0-3 team facing a squad who are fortunate to be 1-2. It’s a sad state of affairs, particularly after the optimism that surrounded the Jacksonville Jaguars entering the season. The only real question at this point is whether Gus Bradley will avoid the recent curse of being fired after crossing the pond.