Rex Ryan getting one over on Bill Belichick was right up there amidst several unexpected results as NFL 2016 continues to surprise into week four, but it wasn’t only the scoreline that caught the attention of the Gridiron team ahead of another Tuesday Morning Touchdown.

Not Shy About PI

It’s official: pass-interference penalties are out of control. It seems like every game I’ve seen this year has seen it’s share of overly harsh calls in this area, and it’s getting to the point where defenders are borderline helpless when certain zebras are manning the sidelines. I absolutely understand why the rules where changed, and nobody wants to return to the era when defensive players could basically do what they wanted. However, it’s now gone too far the other way – and there’s a simple resolution. Instead of PI being a spot foul, why not make it a 15-yard penalty? Many would argue that it provides defenders with too much of an incentive to just foul if they’re beat, but that’s the same for most calls. Linemen often flagrantly hold when they’re beat, knowing the penalty won’t be too huge. But that risk is worth it to stop many team’s offensive system simply being to have their quarterback just lob bombs upfield in the hope a defender dares to touch the receiver. And while you’re at it Competition Committee, defensive holding/illegal contact really shouldn’t be an automatic first down! (Matthew Sherry)

Three seasons ago, Richard Sherman was asked in a press conference about that on-field rant after the NFC Championship Game. “I was making sure everybody knew that Crabtree was a mediocre receiver,” he said. “Mediocre.”

There, in another big spot, Michael Crabtree had failed to make the play as Sherman tipped a pass away from him in the end zone to send the Seahawks to the Super Bowl. One year earlier, in the dying throes of Super Bowl XLVII, Colin Kaepernick looked Crabtree’s way three times from the five-yard line with the Niners down by five. Incomplete. Incomplete. Incomplete. They weren’t errors. Sherman made an outstanding play, one of Kaepernick’s hurried passes in the Super Bowl sailed out of bounds and Crabtree was well defended on the other two. Yet it was hard to disagree with Sherman’s suggestion.

A top-10 draft selection, Crabtree spent six years in San Francisco and managed just a solitary 1000-yard season. Last off-season, he penned a one-year, $3.2m deal across the Bay Area, a prove-yourself contract with Oakland. Playing as a ‘number two’ opposite Amari Cooper, he pulled in three more touchdowns and just over 100 yards fewer than one of the most talked-about rookie receivers for years. Perhaps playing second fiddle was beneficial to Crabtree, ‘Mr Mediocre’.

This year, on the Michael Crabtree Redemption Tour, he’s blown that idea out of the water. It was Crabtree who Derek Carr turned to on the controversial two-point conversion in New Orleans in Week One and, in the same Superdome where he failed to snag any of Kaepernick’s three tosses, Crabtree brilliantly came down with the catch and Oakland won. This Sunday, at the home of the team who won Super Bowl XLVII when Crabtree and Kaepernick could not connect in the end zone, the 29-year-old caught three touchdowns, including the game-winner as the Raiders went 3-1 and handed a first ‘L’ to the Ravens. Three different scores showcased what Crabtree has – excellent hands to snag a fade, a big body to absorb an Eric Weddle hit and crisp route-running ability to leave the corner for dead. Through four weeks, he has the joint-most touchdowns in the league.

There were other words used to describe Michael Crabtree in Sunday’s post-game press conference, and not one was ‘mediocre’. “He’s one of the best receivers in this league,” said his quarterback Carr. A quarter of the way through the 2016 season, it’s hard to disagree with that suggestion. (Liam Blackburn) 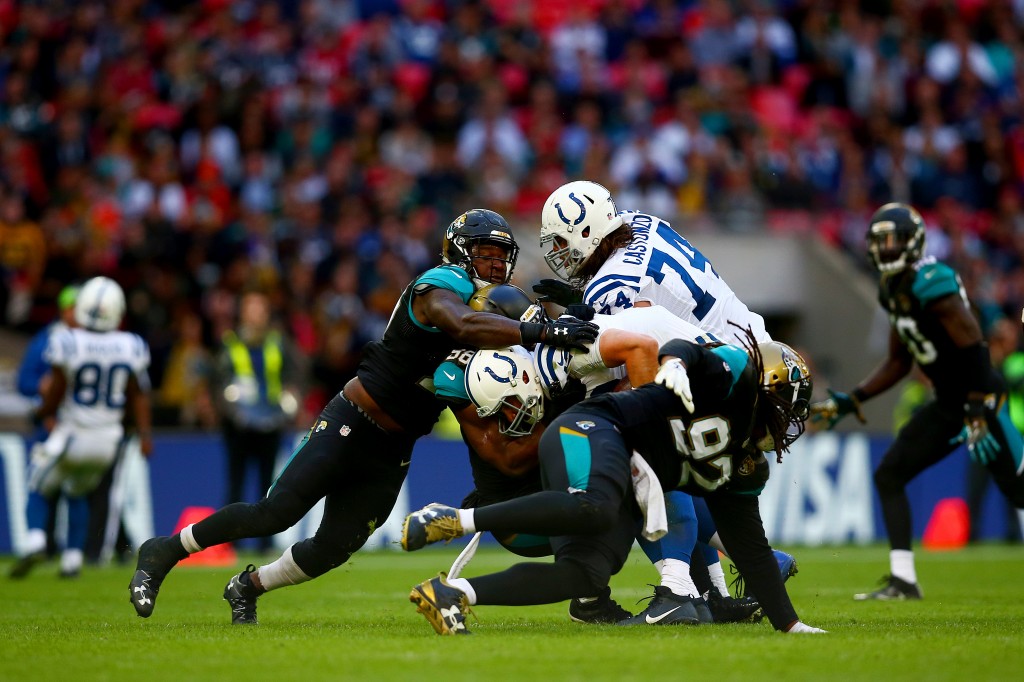 Andrew out of Luck?

On Sunday afternoon, Andrew Luck made one of the worst decisions I’ve ever seen on a football field.

Facing 4th-and-one at midfield, with 1:36 left on the clock and down by three, the field opened up in front of Luck. But, rather than basically walking the four paces it would have taken to gain the first down and keep the game alive, Luck decided to put his trust in the hands of a receiving corps who had a litany of dropped passes across the afternoon. His short pass hit Dwayne Allen’s hands of stone and it was game, set and match Jags. Idiocy!

But, when I watched the play back this morning, I felt pity for Luck rather than anger. Admittedly, the play had been helped partially thanks to a missed hold from Jack Mewhort on Sen’Derrick Marks, but the sieve of an O-line that had allowed Jacksonville to double their season’s sack total (six for 44 yards) clearly had the former Londoner spooked.

The Colts have a deeply-flawed roster surrounding Luck. Good teams don’t make the same mistakes; they fix problems and move on. But Indy are plagued by slow starts, missed tackles, dropped passes and bonehead penalties. It doesn’t get any easier for the Colts, who are the first team to forego their post-London bye. London has a tradition of seeing losing head coaches biting the bullet, and I’ve been banging this drum for a while, but it’s clear that Jim Irsay needs a complete clear out. (Will Gavin)

What is it with NFL schedule planners giving the Tampa Bay Buccaneers successive 4pm home games this early in the season? Is their fixture-forming supercomputer not fed meteorological data for Florida? Hasn’t anyone been – or at least had a relative that has – to the so-called ‘Sunshine State’ in the fall?

In back-to-back weeks, the Bucs have had games interrupted in the final quarter by storms severe enough to warrant messages urging fans to take cover in the concourses, with a 69-minute stoppage to proceedings in Week 3 preceding an 86-minute hiatus delaying Denver’s march to victory on Sunday. If the schedulers can accommodate Miami’s request for early away games to facilitate upgrades to the rechristened Hard Rock Stadium, and then put their home ties alongside Jacksonville’s in the early slot, couldn’t the same be done for Tampa?

Ironically, the biblical conditions that rolled in across Raymond James Stadium on Sunday almost echo the storm building within the venerable structure as the Buccaneers’ record after four weeks shows a team with fewer wins than rain delays this season. Okay, so the reigning Super Bowl champions were never going to be easy opposition, but Dirk Koetter’s only win came over Atlanta in Week 1, when Tampa Bay were still considered a playoff darkhorse, and the head coach says he is concerned by the lack of progress being shown by Jameis Winston after the second-year QB was sacked five times and threw two picks – for a season tally of eight second only to Ryan Fitzpatrick – that eventually led to Bronco touchdowns.

It’s the Panthers next up before Tampa hit their bye, and the Bucs have until Monday night to catch lightning in a bottle. (Craig Llewellyn) 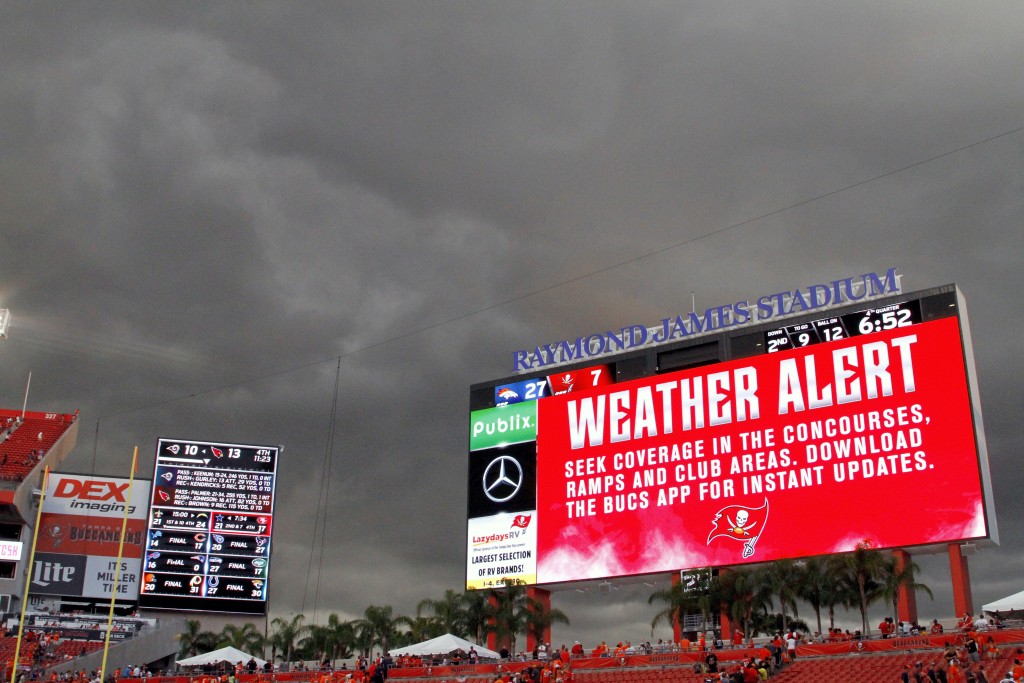 Rex Ryan simply couldn’t help himself after the Buffalo Bills’ 16-0 victory in New England. From imitating Bill Belichick to suggesting a source inside the Patriots building told him Jacoby Brissett would play (an assertion that should have the league office on the phone). Ryan does have cause for celebration, turning things around at a time when the Bills were rumoured to be scouting out another coach at 0-2. The wins against Arizona and New England have left Buffalo 2-2, but with a real shot at 5-2 given their upcoming schedule (@ Los Angeles, v San Francisco, @ Miami). However, if Rex is what he has been recently, the Bills will blow the winnable games having won the big ones. That’s been his MO for several years. And even if they don’t, it’s hard to see the same outcome when they host the Patriots, with Tom Brady back, in Week 8. Don’t poke that bear, Rex. When will you ever learn?

‘Superman’ Only Human After All?

Much was made of Cam Newton carrying Carolina to last year’s Super Bowl, and his own poor showing in the big game only added credence to that belief as Denver cruised to a comfortable victory in Levi Stadium.

So what would the Panthers be without Cam under centre at all? Fans got a glimpse of that on Sunday as the self-styled ‘Superman’ of the NFC South exited the rout in Atlanta with concussion symptoms, leaving Derek Anderson with big shoes to fill as he tried to keep pace with the Julio Jones-inspired Falcons.

Typically, Newton’s absence came after he tried to add to his afternoon contribution – 165 yards passing, 30 rushing and a TD toss – receiving a helmet-to-helmet hit as he attempted to rescue a fourth-quarter two-point conversion attempt. Although the scoreboard ticked over, Cam’s clock appeared cleaned by the contact and he played no further part in the game, with Atlanta going on to record a 48-33 win as Anderson, after a solid start, threw two INTs – including a decisive pick six.

The Panthers subsequently confirmed that Newton would be following the league’s concussion protocol which, following the batterings he took against Denver and Minnesota, must cast some doubt over his availability for the clash of 1-3 teams when Carolina hosts Tampa Bay next Monday night. (Craig Llewellyn)

From now on, with at least four weeks’ data in the books, we’ll bring you our Fine Five, featuring the best teams in the NFL right now…

Le’Veon Bell might be back, and they might have hammered a declining Kansas City team, but Pittsburgh still doesn’t have the defense to rank any higher.

Carson Wentz has looked like a beast, as has Jim Schwartz’s defense. The win over Pittsburgh looked a coming-of-age performance, but much will defend on their outings in a stronger-than-expected NFC East.

Win two games without Brady they said. Instead, they’re 3-1 with the fourth-best scoring defense in football. This might be the most talented team in the league with everybody healthy.

No team has a more impressive collection of wins on their record (Green Bay, Carolina on the road and the New York Giants). The Vikes are legit.

The Super Bowl champions’ defense hasn’t slipped too much and the quarterback play has improved significantly. Until somebody proves otherwise, we have to rank Denver top of the pile.