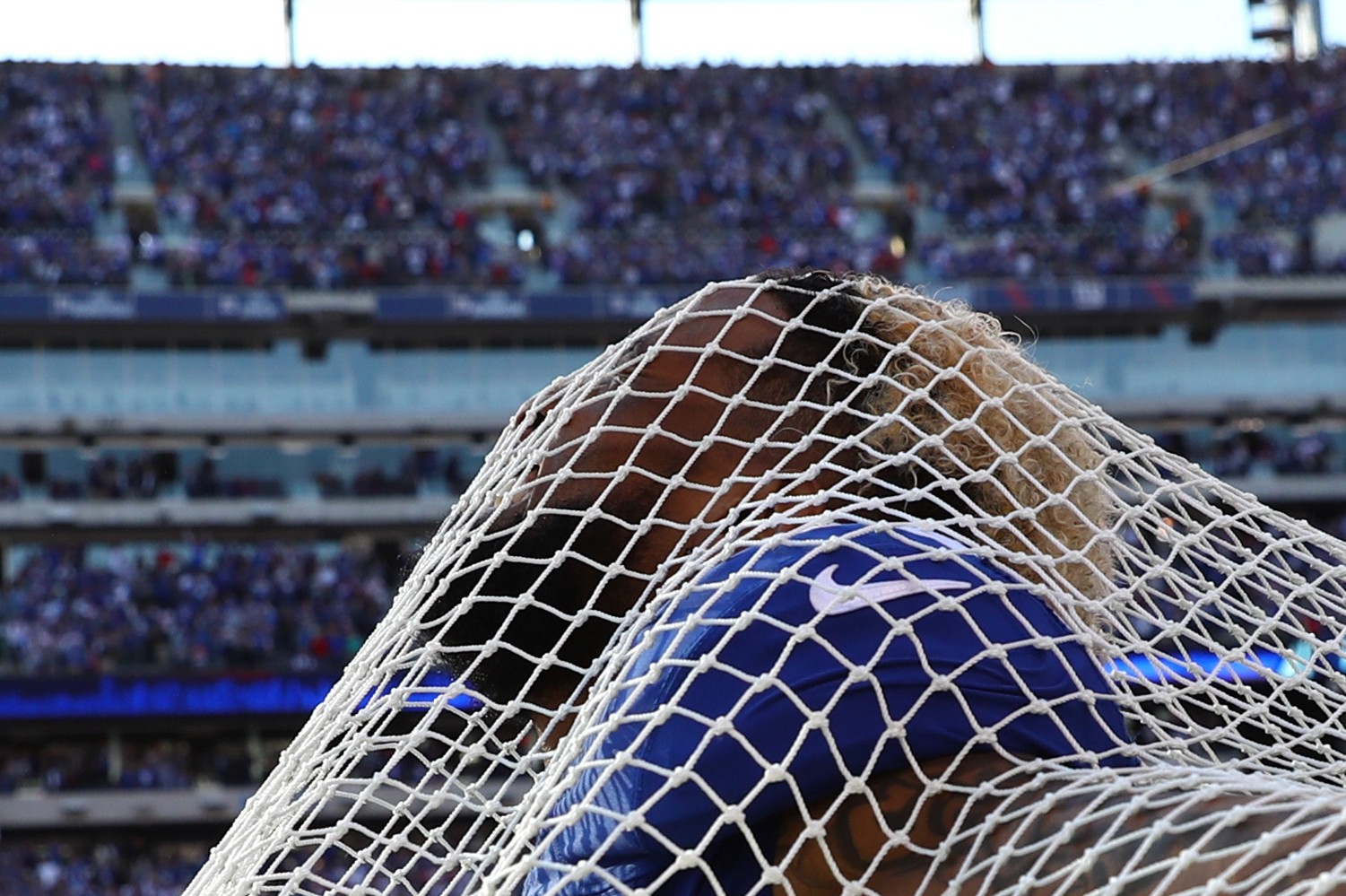 The Gridiron team looked past the low-hanging fruit of the Calamity Colts and potential QB controversy in Big D to bring you something more for your weekly Tuesday Morning Touchdown.

Am I excited to see Odell Beckham Jr. in the flesh at Twickenham? You bet. Am I doubly excited after his career-best 222-yard game (with two touchdowns) against the Baltimore Ravens? You bet. Is there a caveat? You bet.

I mustn’t be the only one who watched the latest in a growing collection of look-at-me moments from Beckham with a feeling of, well, urgh. The only thing greater than OBJ’s talent right now seems to be his ego, an ego that almost cost his team again versus the Ravens. The penalty for a celebration that seemed to go on longer than the replays of his famous catch was ridiculous, and ended up leaving his defensive teammates desperately batting down a Joe Flacco play to seal the win soon after.

The fact he’d gotten away with a similarly ludicrous display following his first TD – on a day Vernon Davis was flagged for using the ball as a basketball – made the whole thing all the more remarkable.The NFL’s rules on celebrations are pathetic, but clear as day. And for Beckham to almost hand over a W he’d earned because he can’t control himself stinks. It stinks of a man who’s become a law unto himself in a Giants organisation lacking the discipline they have been famed for in years gone by. Let’s hope we just see the good side of Beckham in London. (Matt Sherry)

This piece could have been written for last week’s TMT, but probably has even greater resonance after an unexpected – and vital – win for the embattled San Diego Chargers.

Even as quarterback Philip Rivers was insisting that the Bolts needed no sympathy after losing four of their first five games by a combined 14 points, they turned things around with victory over reigning Super Bowl champs Denver on Thursday night – and, for the second game running, it was hard to ignore a player who had been missing from the opening month of the season.

Prior to his two-sack debut in a losing cause against Oakland, rookie DE Joey Bosa’s headlines had been limited to his increasingly bitter contract hold-out and ensuing hamstring injury. Since breaking into the line-up, however, he has given cause to wonder if the Chargers may be better than 2-4 had he been available from the off. Denver QB Trevor Siemian felt Bosa’s presence as much as Derek Carr had and, while the rookie couldn’t add another sack to his tally, he warranted enough attention as to allow Melvin Ingram and fellow newboy Jatavis Brown easier access to the Broncos’ backfield.

In a division where teams are taking lumps out of each other, Bosa may yet have an even greater impact on San Diego’s season. (Craig Llewellyn) 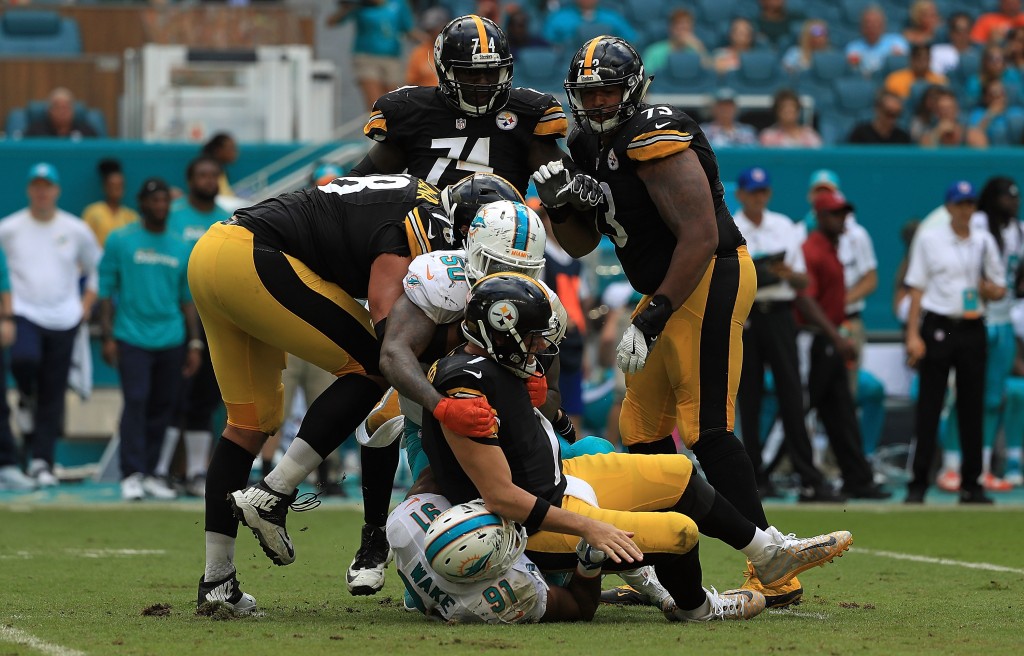 At the risk of treading dodgy metaphoric ground, the air has been taken out of the highly-anticipated Week 7 meeting between Pittsburgh and New England with the news the Steelers QB Ben Roethlisberger won’t be under centre for the clash of what many believe to be the two leading AFC contenders.

‘Big Ben’ underwent surgery to repair a torn meniscus in his left knee the day after his side took an unexpected loss at Miami, the result of trying to limit the damage of a second-quarter interception, and his return to action remains questionable. The encounter with the Patriots has long been billed as one of the games of the season, with Tom Brady restored to New England’s line-up and Roethlisberger and the Steelers (usually) in high-octane winning form. However, unlike Bill Belichick – who has been able to call on both Jimmy Garoppolo and rookie Jacoby Brissett to guide the Pats to victory in TB12’s enforced absence – Tomlin will have to turn to the tried-and-untrusted Landry Jones (32 of 57 for 513 yards, 3 TDs and 4 INTs in 10 previous appearances) this coming weekend, likely limiting his attacking options and the black-and-gold’s chances of victory.

While Pittsburgh might be thankful for a bye in Week 8, the Patriots will steel themselves for a heavier-than-usual dose of Lev Bell (and maybe even a bit of DeAngelo Williams) as they continue their march towards another #1 seed and time off in early January. (Craig Llewellyn)

Okay, it was only the terrible San Francisco 49ers team that the Bills put 45 points on on Sunday, but you have to say that Buffalo are looking pretty good.

They started the season with back-to-back losses – a rusty lacklustre defeat at the Ravens and then downed by the streaky Jets – but something gave and Buffalo fired offensive co-ordinator Greg Roman and this released the shackles for QB Tyrod Taylor, who’d certainly looked out of sorts in the first two games. He and the Bills blew away the Cardinals and then almost inconceivably Rex and Rob Ryan (yes, you read that right) out-coached Bill Belichick in shutting out the Patriots in their own backyard.

Next, a trip to the West Coast and the resurgent Rams would be tough, but Taylor et al swatted away LA’s terrific defense with some ease. And then, on Sunday, LeSean McCoy, who looks back to his 2011 best, tore apart the easy pickings that is San Francisco to leave the Bills at 4-2.

With a visit to Miami on Sunday, the visit of the Patriots and another long trip out west to Seattle before their bye week, if Buffalo can come out of those games 6-3, with injuries in Pittsburgh, the Broncos stuttering and Raiders still unknown, they could be a real AFC wildcard prospect. (Olly Hunter) 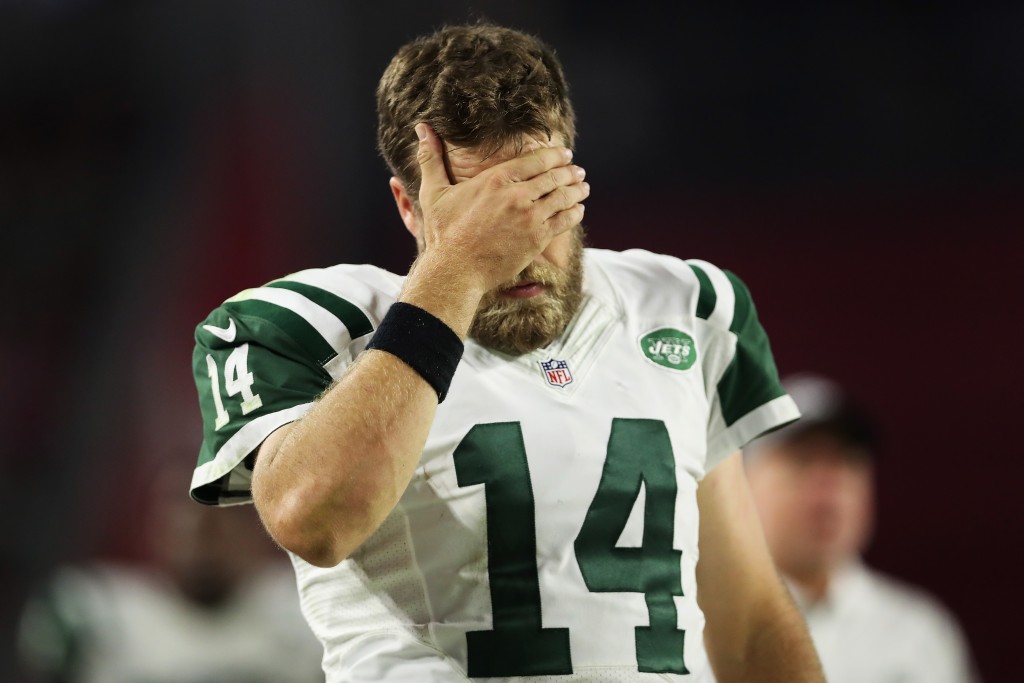 The Jets’ curious tango with Ryan Fitzpatrick off the back of his record-setting 2015 season was one of the summer’s more interesting plots. Six weeks and 11 interceptions later, it’s clear to appreciate NYJ’s hesitation to repay him the going rate and the rest of the league’s complete apathy towards spiriting him away from the Big Apple.

Fitzpatrick had a rare year last term when absolutely everything went right – the plethora of ‘near-picks that weren’t’ highlighted that – but his body of work previously always hinted at a likely decline, even if the rate at which it has unravelled this term has been surprising, and perhaps sped up by his employers’ clear lack of faith in him. Regardless, Fitzpatrick’s last starting shot in the NFL may have effectively ended in the state he was born on Monday Night Football, so where do New York go now? To the tried-and-tested Geno Smith, whose sideline tantrums and pathetic in-game interview spoke volumes about his maturity levels? Or to the two young QBs they’re trying to develop for a future which, at this rate, will not include the current hierarchy?

It’s far from the only issue facing Todd Bowles, who can take solace in a kinder upcoming schedule, but only the Browns could lay claim to a messier QB room right now and, at this rate, the two will be fighting it out with San Francisco for the top signal caller in April. (Liam Blackburn)

Success can be a fickle mistress but some teams have obviously enjoyed better relationships with her than others, and that can make it hard for fans to accept anything other than ‘the norm’. To hear the Packers backers booing their team was a particularly jarring feature of Sunday’s encounter with Dallas, but Aaron Rodgers and Co. hardly helped themselves with a rare inept showing against one of NFL 2016’s surprise outfits.

While the Cowboys rookie backfield duo continued to rack up notable achievements – Dak Prescott taking his string of pass attempts to 177 before finally being picked and Ezekiel Elliott torching a defense that hadn’t previously allowed more than 50 rushing yards by racking up 157 en route to a record fourth straight 130+ performance – Green Bay had to wait until the final quarter to score a touchdown as their final numbers disguised a distinctly off-colour performance.

Upsetting the owners is never a good business plan, and Mike McCarthy – who also resorted to field goals on three fourth-and-short situations – has much to ponder in the short week before Chicago come to town. (Craig Llewellyn)

Laying eggs when nobody expects it is the Steelers’ MO under Mike Tomlin, but it doesn’t mean anybody wants to face them when Big Ben is healthy.

There are no moral victories in the NFL, except when you score touchdowns on three successive drives in Seattle and almost leave victorious. Atlanta are legit.

Russell Wilson is practically playing on one leg behind the worst O-line in football… and Seattle are still 4-1.

Sunday’s game at the Philadelphia Eagles looks a lot easier than it did two weeks ago, especially with the Vikes effectively holding a three-game lead in the division.

Brady is Brady, Gronk is Gronk, and the Patriots’ D is second in NFL in points allowed. That looks an unstoppable combination.