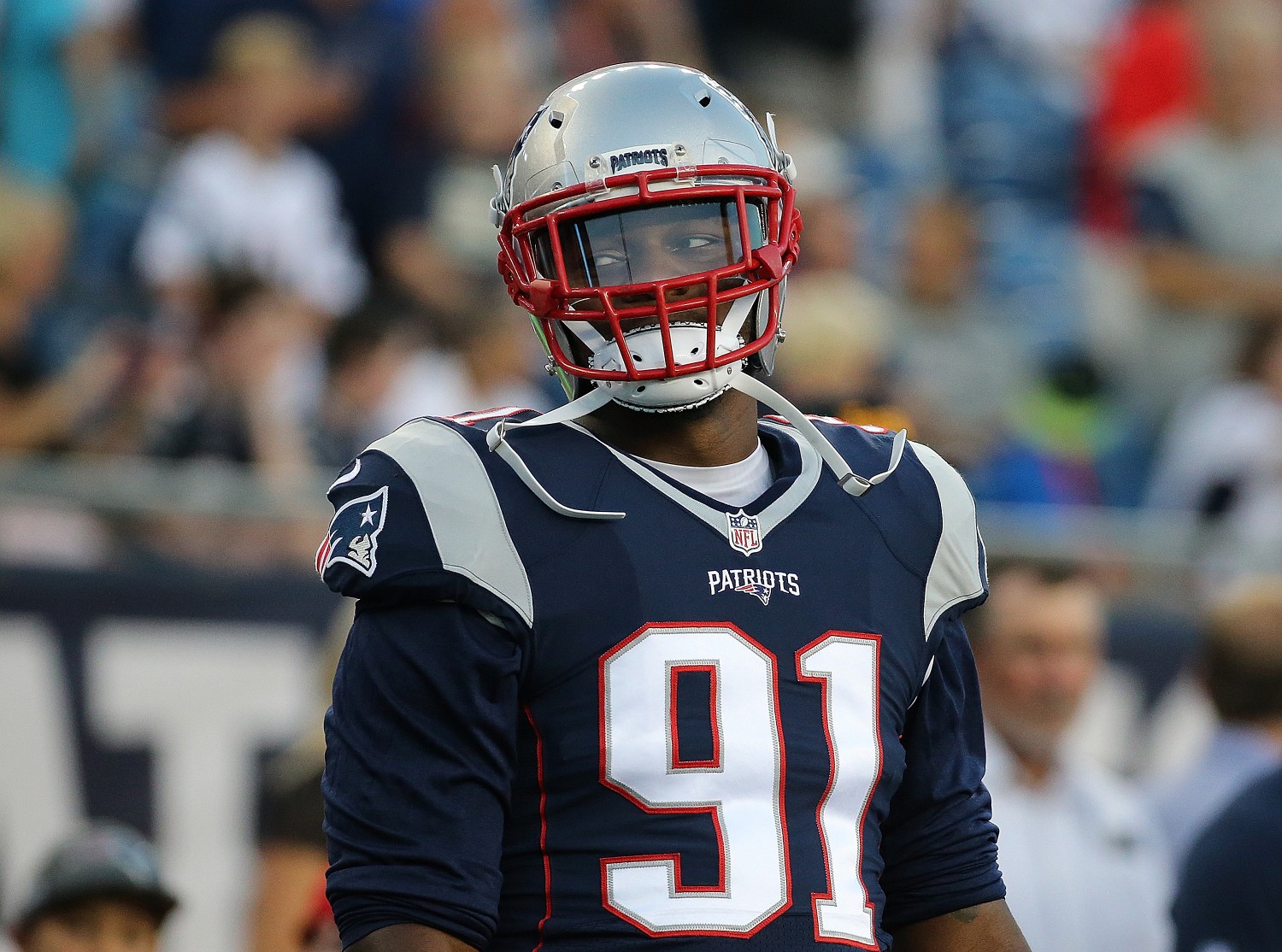 The Gridiron team was all set to bring you the weekend’s talking points for this latest Tuesday Morning Touchdown, but Bill Belichick had other ideas…

The NFL world was rocked yesterday when the New England Patriots traded star linebacker Jamie Collins to the Cleveland Browns for a conditional third-round pick.

Collins is a great player, on the cusp of being elite. But there is no doubt his effort levels have dropped this season, a contract year, and all indications suggest New England’s hierarchy weren’t in love with his approach. And although he is great, Collins is nowhere near the Luke Kuechly class for one reason: he isn’t consistent. His New England career was summed up in the AFC Championship Game last year, when Collins was the best player on the field for the majority of the game. But the word ‘majority’ is key given his two defensive breakdowns earned Denver their only two touchdowns.

Bill Belichick apparently felt the New England defense, which ranks third in points allowed but has played worse than that bare number suggests, needed a fire lit under their backsides. He apparently looks at this – removing a guy who’s ultra-talented but showing questionable effort – as a statement that will be addition by subtraction. (Matt Sherry)

The trade puts huge pressure on the Patriots’ season. New England are the best team in the NFL right now and, given the mediocre compensation in this deal, most would have stayed the course with Collins and focused on this year’s Super Bowl. Belichick is doing it his way, but this move will be judged by the destination of the Lombardi Trophy. It will also be judged after today, when we find out if Belichick rolls the dice again before the end of the trade deadline. (Matt Sherry) 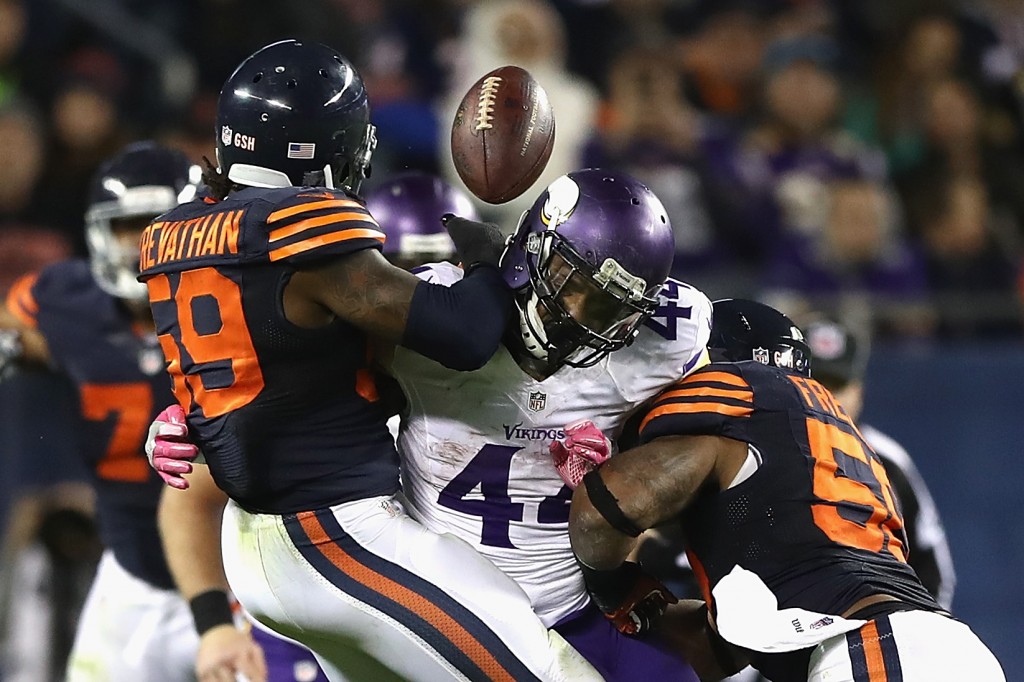 I like Vic Fangio. This is not the first time I’ve put this on record. And I like the young Bears defense who, now they’re getting healthy, should ensure Chicago are much better in the second half to 2016.

But Akiem Hicks, Pernell McPhee and Leonard Floyd are NOT the pairing of Justin Smith and Aldon Smith who put Fangio on the map in San Francisco. Yet, last night, Jake Long and the banged-up Vikings O-line made them look like future Hall of Famers.

So, with the Vikings suffering back-to-back losses, don’t suddenly lose your spine Rick! If you believed there was a Super Bowl window when you traded for Bradford, at 5-2 that hasn’t closed! Get one of your veterans to agree to a team-friendly restructure then go spend a second-round pick on either Joe Thomas or Joe Staley – both of whom could have three or four years of Pro Bowl-level production in their locker. Where’s the guarantee you’re going to get that from a second-round pick next season? To me, if you can get the deal done today, it’s an absolute no-brainer. (Will Gavin)

Josh Norman showed why he is one of the more mesmerising – and polarising – players in the NFL as he endured the highs and lows of the final International Series game of 2016.

Only cleared to return to action from a Week 7 concussion in the days before the game, Norman matched up with A.J. Green and made the Bengals’ #1 wideout work hard for his yards to show why he is one of the league’s premier corners. Norman also had three potential interceptions hit the Wembley turf, but the biggest talking point were the five penalties – including four for hands to the face – called on the Washington DB during the 27-27 tie.

Despite insisting that Green was pushing his hands up into the facemask, Norman clearly continued to deploy the same press-coverage tactic in the hope it would get overlooked, confirming the definition of insanity based on ‘doing the same thing over and over again and expecting different results’. What really drew attention to his prolonged English afternoon, however, was the soliloquy on umpiring standards with which he concluded his media obligations. Clad in brown leather jacket and Manchester United scarf, and with Paul Pogba in attendance, Norman launched into a near four-minute diatribe on the field judge who not only called the penalties against him but also, in his opinion, missed a host of other calls that could have turned the game.

Maybe it was the onset of Halloween, but it’ll certainly be an overseas trip that Norman – and likely league officials – won’t forget in a hurry. (Craig Llewellyn) 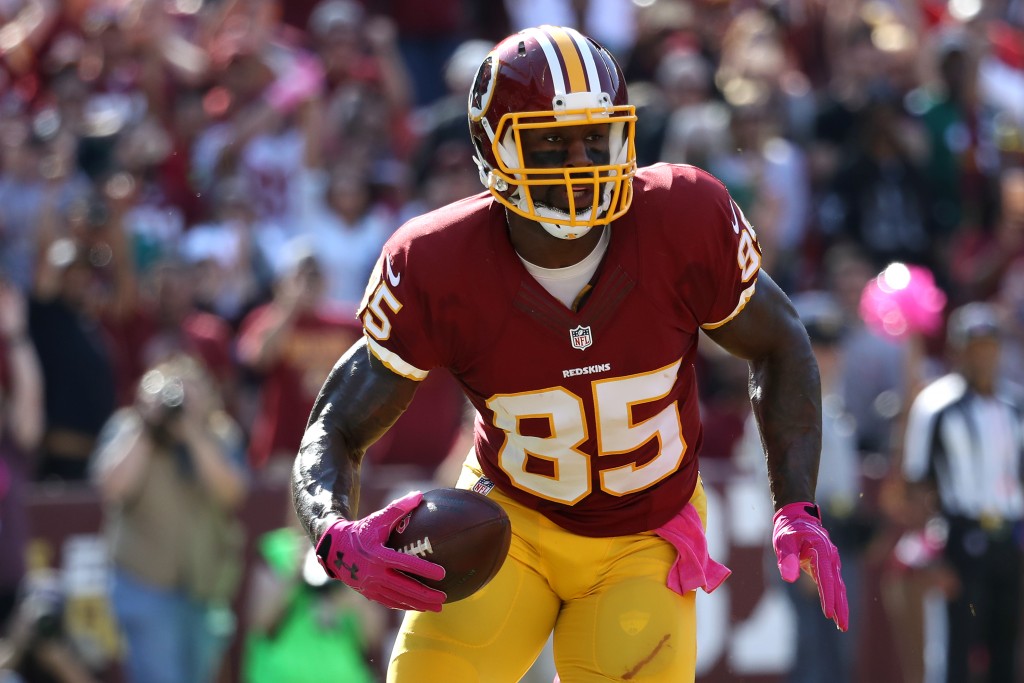 A second tie in as many weeks stole the headlines as Washington and Cincinnati ineptly went through overtime to share the spoils at Wembley on Sunday. But it was two tight ends that caught the eye, one returning from injury and the other back to some potentially serious form.

Let’s start with the Bengals’ Tyler Eifert. Injured in the Pro Bowl last season, he sat out the first six weeks of the season, was sparingly used in Week 7 but back in Week 8 – and with a bang. Targeted 12 times, he collected nine catches for 102 yards and a touchdown. Cincinnati have struggled in the red zone this season but, with Eifert back and defenses having to scheme for him and A.J. Green, this will allow the supporting cast to exploit the holes. The sheer skillset of the big tight end and #1 receiver will make this offense all the more potent in an AFC which is struggling to keep pace with the dominant Patriots.

The tight end I’m talking about at Washington isn’t the excellent Jordan Reed, who was relatively quiet on Sunday, but Vernon Davis. A player who, in Reed’s absence in the previous two weeks, had racked up a TD and 129 yards backed it up against the Bengals with five receptions for 93 yards. While he’s not quite back to the halcyon days with the 49ers from a few years ago, he has certainly banished the ‘experiment’ in Denver and actually looked really good at Wembley. Former Packers Super Bowl-winning linebacker Brady Poppinga said on the radio broadcast that Davis was the fastest guy he had to look out for when he played against him. Combine that with him suddenly looking interested again, and you begin to contemplate a Patriot-style two tight end offense with him and Reed. That could create huge mismatches and help Washington reach the postseason once again. (Olly Hunter)

Return of the ‘Cardiac Cowboys’

Jerry Jones may not thank them, but the ‘Cardiac Cowboys’ are a thing again after a dramatic overtime win against arch-rival Philadelphia.

For much of the game, the home team appeared on the back foot as Carson Wentz held the upper hand in his overly-hyped battle with fellow rookie Dak Prescott, but it was the fourth-round pick who belatedly inspired his team to victory to take Dallas to 6-1 and earn himself at least a further seven days at the helm of the NFC’s #1 contender.

Prescott had not been allowed to replicate earlier performances as the Eagles harried him into the most mistake-ridden game of his short pro career, including a goal-line interception with the ‘Boys poised to retake the lead. Despite the obvious notes of caution, and the shadow of Tony Romo refusing to fade from his shoulder, the rookie showed some cojones in rebounding when it mattered, leading Dallas down the field on a pair of fourth quarter scoring drives to tie things up at 23, the first time he has had to come back from a distance since the season-opener.

OK, this Cowboys team is about more than its QB, with trick plays – including a Cole Beasley pass and a fake punt that Chris Jones took 30 yards to help set up a field goal – and a defense that also came to life in the final period, but, in the end, it was another 12-play drive in overtime, focusing on both Prescott and fellow rookie Ezekiel Elliott, that culminated in Jason Witten’s first touchdown of the season to cap an emotional night for the long-serving tight end. Having been involved in similarly close games earlier in Jason Garrett’s reign, this is nothing new for the Cowboys but, if it becomes the norm again, someone might want to tell Mr Jones that daily doses of aspirin can help… (Craig Llewellyn)

Much of the love is going to Oakland, but the Chiefs beat them two weeks ago and are playing great football.

Impressive job of redefining the term ‘offensive line’. Sam Bradford might not be healthy much longer.

The lack of a serious threat in the AFC North means they can take their sweet ol’ time with Big Ben. That’s good news.

Watching Sunday, I still think Dallas are a better team with Tony Romo (if he’s the same guy). But they’re pretty good anyway.

With or without Collins, this is the NFL’s best team. And it’s not really close.