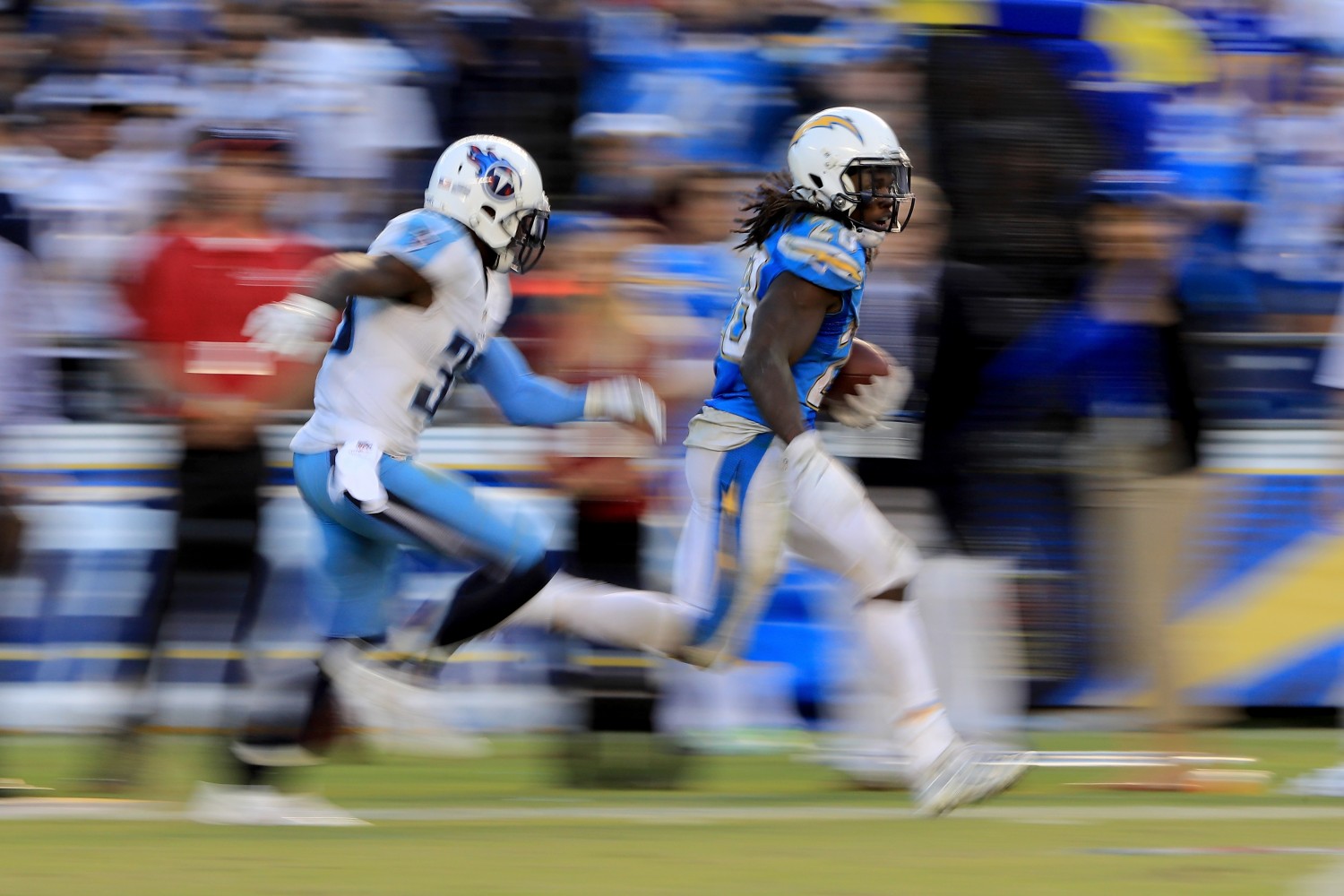 The Gridiron team peruses the points of interest as the NFL regular season moves into its second half, packing potential playoff contenders into this week’s Tuesday Morning Touchdown…

Poised for a Charge?

We’re just past halfway through the campaign and the playoff race is beginning to take shape. We have a good idea of the prohibitive favourites to reach the postseason (New England and Dallas) but who can come from the pack and launch a push?

I have a name: San Diego. The Chargers haven’t lost a single game by more than one score – their five defeats have come by a combined 20 points – and boast an elite quarterback (Philip Rivers) and running back (Melvin Gordon). Their remaining divisional games (Oakland and Kansas City) are both at home, while only two of their other five opponents are .500 or above (Miami and Houston). It’s not a stretch to say San Diego, who have also overcome an array of injuries, could win out and finish 11-5. (Matt Sherry)

Gordon was already well into the process of shrugging off his disappointing rookie season before Sunday’s match-up with the Titans, but a career day in front of the San Diego faithful might have bigger implications than merely keeping the Chargers in the AFC West race.

With the city due to go to the polls on Tuesday to determine approval for tax increases designed to fund the building of a new stadium (what, you didn’t think we meant that other vote, did you?), it is unlikely that Gordon’s 259 yards of total offense will singlehandedly provoke a swing to the two-thirds required ‘supermajority’, but he at least confirmed that he can be all that Chargers fans hoped for when drafted 18 months ago.

As injuries continue to decimate the Chargers roster, Gordon’s presence adds balance to Rivers’ aerial attack. The former Wisconsin Badger passed 100 yards on the ground for the second successive game, added 63 through the air, and increased his league-leading TD tally to 11. And all on a team still recovering from a loss-laden start and now sitting at 4-5 in a division where their three rivals all have at least six wins.

It’s too early for even the most farsighted seers to predict a Super Bowl run for a city yet to win any of America’s major sporting trophies, but Gordon – if he can merely remain healthy (‘alive’ is a given, Mr Blessed!) – may still have a say in both the short- and longer-term futures of the franchise. (Craig Llewellyn) 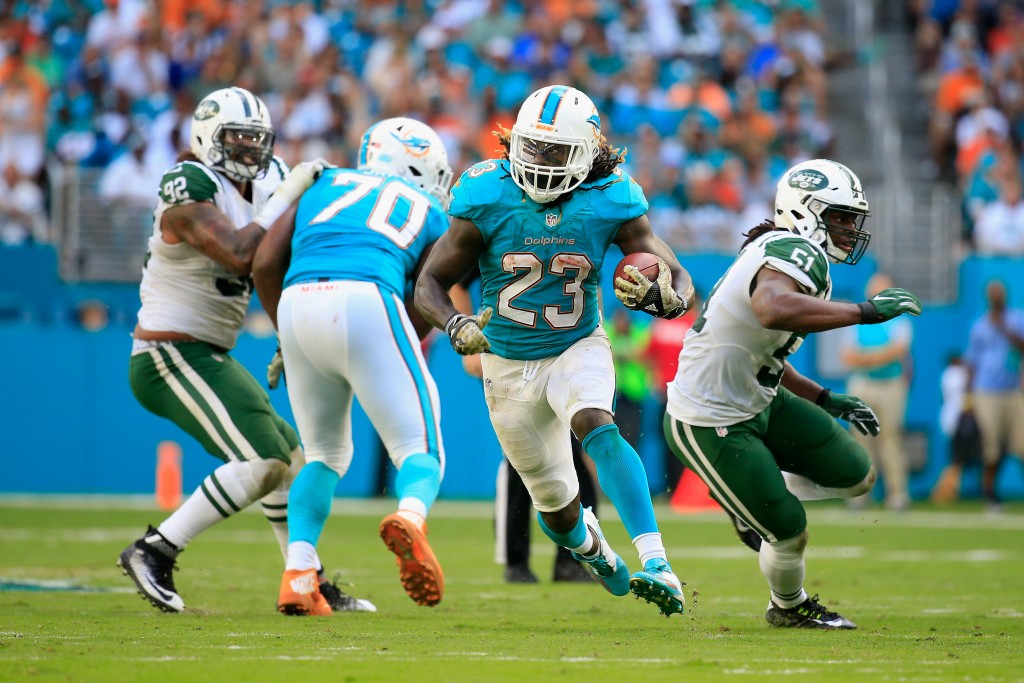 Ajayi’s performance against the #1 ranked Jets run defense on Sunday was one of patience and resilience for him and his head coach Adam Gase, who stuck to the ground game despite New York’s ability to consistently clog the running lanes. But, with another strong performance from the Dolphins offensive line and blocking sensation MarQuis Gray at tight end, Ajayi wore down the Jets front seven in the fourth quarter, putting the game away with a 16-yard run over right guard.

After struggling with the mental side of things in 2015, and some attitude issues coming into this season that saw him left in Florida for the season opener in Seattle, the former Boise State star has become one of the premier backs in the NFL. Miami now travel to California to play the Chargers and the Rams in the next two weeks, where Ajayi will go head to head with 2015 draft classmates Melvin Gordon and Todd Gurley. If he comes out on top in the running battle, his Dolphins could be 6-4 and on a five-game win streak on the back of the hottest runner in the conference. Quite a story. (Simon Clancy)

Gurley is not right.

Okay, there’s been speculation about his starting QB – will it be the current man under centre, Case Keenum or will it be No. 1 draft pick Jared Goff? – but that shouldn’t affect last season’s Offensive Rookie of the Year. In his first nine games as an NFL player, Gurley rushed for 775 yards at five yards per carry and six touchdowns but, through the first eight games of this season, he’s managed just 451 yards at just over three yards per carry and just three TDs.

He just isn’t the same player on paper, or on the eye. Gurley is visibly lacking in confidence, gone is his patience and step at the line of scrimmage to wait to spot a hole to open up for him to dart through. Part of his lack of form is down to the Rams’ offensive line. Not upgraded through free agency and without anyone being brought in through the draft, it just isn’t creating the seams and running lanes for #30. Secondly, teams are scheming for Gurley now. He’s a marked man and, when the passing game isn’t great, the running box can be loaded with defenders, safe in the knowledge that Keenum won’t have much success throwing. As such, Gurley is stuffed.

A change in QB could help Gurley. Goff can sling the ball and he’s not a first overall pick for no reason, so whatever issues were found in training camp and practice need to be sorted out or we could have a wasted year for one of the NFL’s most talented runners. (Olly Hunter) 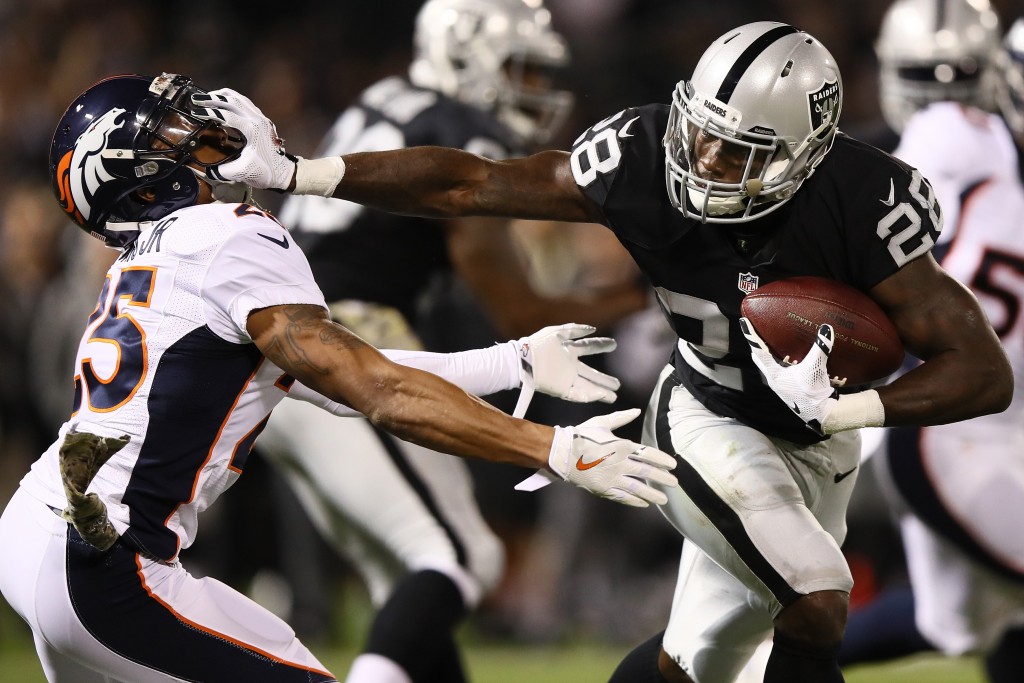 Oakland’s wins prior to Sunday had come over the Saints, Titans, Ravens, Chargers, Jaguars and Buccaneers – none of whom are above .500. None had been particularly convincing either, so there was a danger that the hype surrounding the silver-and-black was ill-advised. But a 30-20 hammering (and don’t let the relatively slim margin fool you) of the reigning Super Bowl champions was evidence these Raiders are for real.

Derek Carr and his receiving duo, Amari Cooper and Michael Crabtree, took a backseat as Jack Del Rio’s team showed they can beat the opposition in other ways, rushing for 218 yards behind a fearsome offensive line featuring Kelechi Osemele, surely the best guard in football.

The defense has improved too – Khalil Mack’s found his mojo again and Karl Joseph’s made a big difference in the secondary – and Carr will have bigger days when not faced with a pass D as restrictive as Denver’s every week. This is a team bound for January, for the first time since 2002, and, in dominating on the ground against an opponent of the Broncos’ calibre, they showed they are a far from a one-trick pony. (Liam Blackburn)

Last week, we brought you the return of the ‘Cardiac Cowboys’, but the fact is the ‘Boys have only had to come-from-behind to win at the death once this season. If any moniker deserves to be resurrected in 2016, it’s the ‘Cardiac Cats’ title bestowed on the Detroit Lions a couple of years ago.

The habit of coming back from fourth quarter deficits has been repeated this season, with Matt Stafford and Co. proving ‘clutch’ on no fewer than five occasions, the latest when defeating the Minnesota Vikings on Sunday. While the fading Vikes may be in the midst of a losing run – and didn’t help themselves with two missed kicks and being forced to punt when starting one drive on the Lions 18-yard line – the game was played in the new, and intimidating, US Bank Stadium, adding magnitude to the Lions’ latest great escape, the foundation of which was provided by sterling defense and special teams play.

Trailing 16-13 when the home team scored with 23 seconds remaining, Stafford defied a lack of time-outs to manoeuvre Detroit close enough for Matt Prater to bang over a 58-yard field goal with two seconds – and room – to spare. After the Lions won the toss in overtime, Stafford led his team 87 yards back into Vikings territory, from where Golden Tate shed shoddy sideline tacklers before drop-kicking the hapless Andrew Sendejo as he back-flipped into the end zone.

The greatest escape may yet lie ahead of the 5-4 Lions, as they move to within one game of Minnesota at the top of the NFC North. No-one predicted the post-season for Detroit but, right now, it’s a very real possibility – especially if it comes down to the last minute! (Craig Llewellyn)

Sunday’s game said as much about Denver, and their suddenly bad run defense, but it was the biggest Oakland win in nearly two decades.

Andy Reid’s crew have now won 17 of their last 20 games, better than any team in football. And that’s without Justin Houston et al.

GM Thomas Dimitroff is locked into a long-term deal, as is head coach Dan Quinn. Atlanta could be good for a while.

A proper test comes at home to Seattle on Sunday, but we’d be surprised at any outcome other than a Pats W.