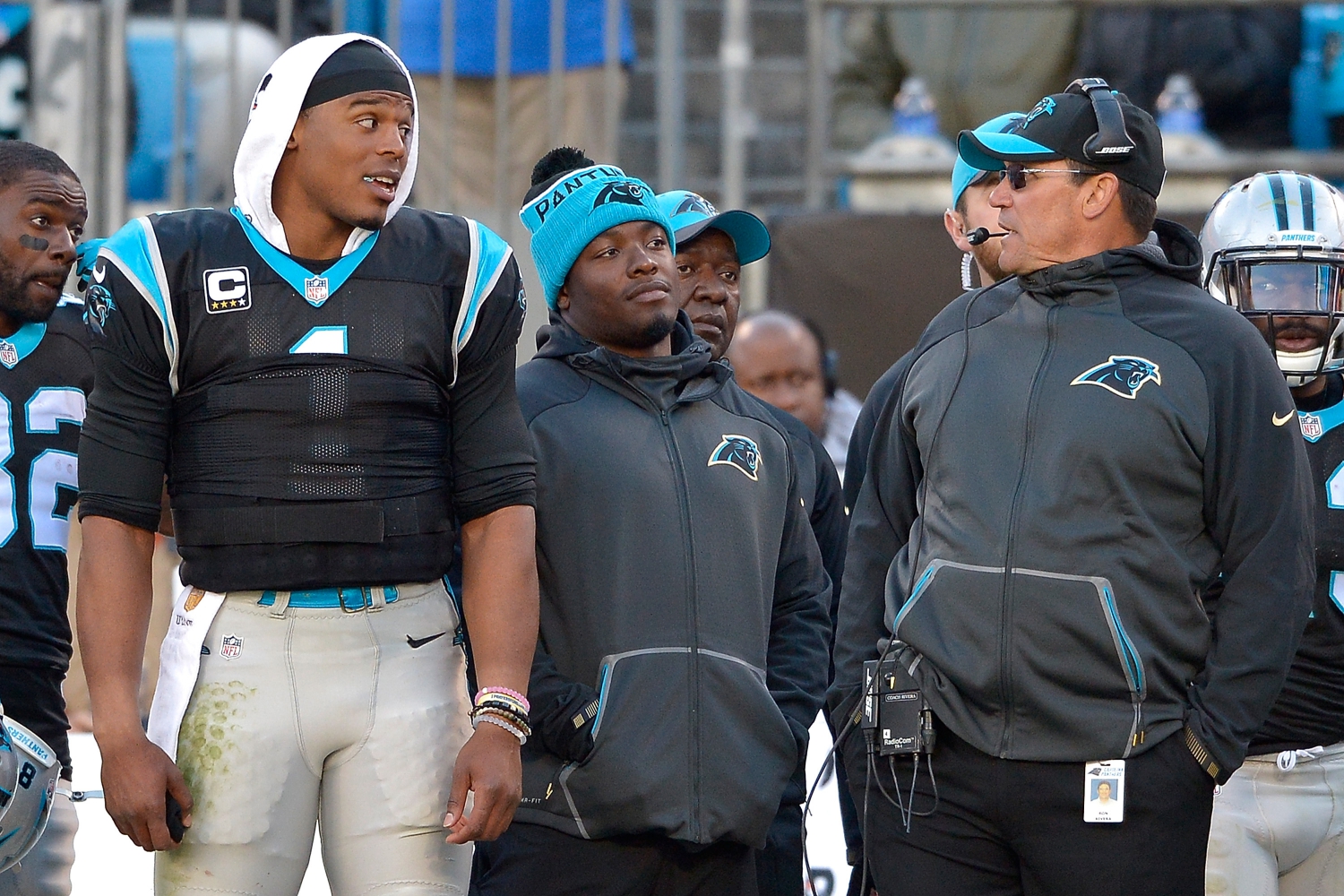 The Carolina Panthers are the last undefeated team standing after the New England Patriots’ latest quest for 19-0 failed. Matthew Sherry discusses a week that gave us much more clarity on the playoff picture.

Cam Not The Only Superman

Cam Newton has received plenty of credit this year, and rightly so. A team yours truly suggested would endure ‘a season of struggle’ in the first of these columns are currently sitting at a scarcely-believable 11-0, with a schedule that makes 16-0 seem more likely than not. However, as ever in the NFL, you sometimes need to look beyond the quarterbacks and dish out credit where it’s due elsewhere. To me, there are several complete unsung heroes in Carolina’s organisation.

The first is Ron Rivera, the league’s most underrated head coach and one of its better defensive minds. The second is general manager David Gettleman, who has drafted and signed a slew of fine players. As well as taking Cam, Luke Keuchly and Josh Norman, he’s managed to find free-agency diamonds in the rough who nobody else wanted, players like Michael Oher and Ted Ginn Jr. Another is defensive coordinator, Sean McDermott, whose unit have been probably the second-best in the league over the last three campaigns.

One man I missed of the above list, largely because I wanted to discuss him in more detail, was offensive coordinator Mike Shula. Famous largely because of his father, Hall of Fame former Dolphins coach Don, Mike is beginning to step from his father’s shadow.

Despite the excitement of three years ago, when guys like Robert Griffin III briefly ‘revolutionised the league’, the rhetoric we’ve heard is how the option has been found out in the NFL. And while that is an understandable reaction (it’s nowhere near as prevalent as many suggested during RGIII’s rookie term), it kind of ignores what Shula has been able to do in marrying college concepts with pro ones to great effect.

The Carolina offense is built around the run. Cam is, as has been rightly been pointed out, an outstanding thrower capable of going through is progressions from the pocket, but this is still a run-based offense. It features virtually every running concept you can think of, from the option to the triple-option to designed QB runs. That it’s so successful is largely due to the unique Newton, who marries outstanding running ability with crucial durability. However, you still have to doff a cap to Shula, the one man in the league that’s been able to crack the code of successfully implementing those aspects on the biggest stage. 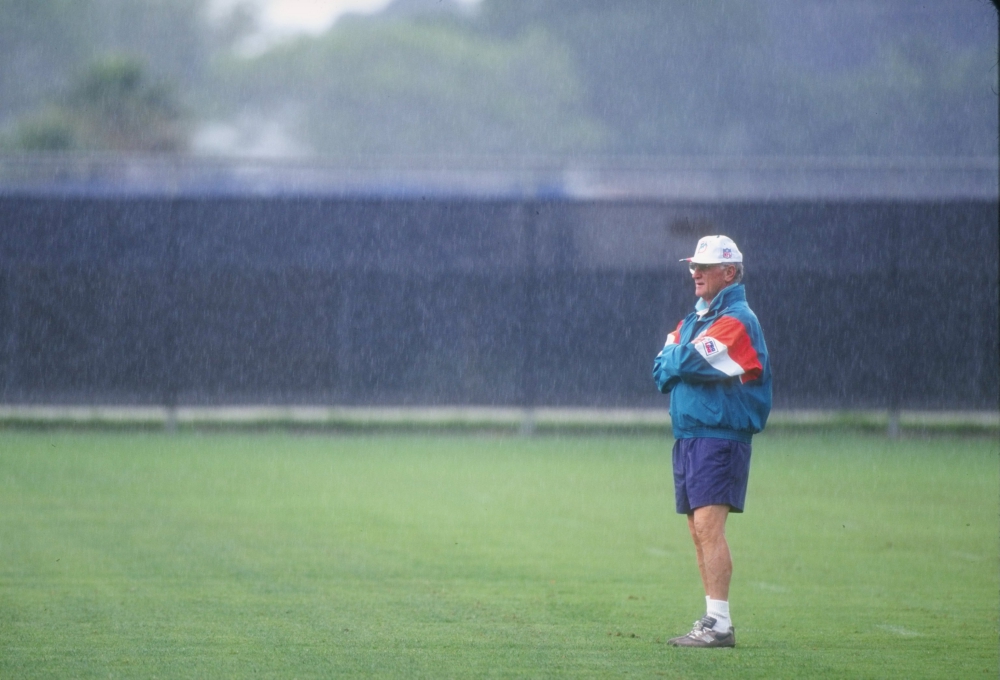 The subject of transferring successful college schemes to the NFL brings me to the man everybody in the media seems to be revelling in the failure of: Chip Kelly. I can kind of understand why. The former Oregon Ducks head coach is not the most warm or cuddly guy and has certainly displayed more than his fair share of hubris since entering the league. Yet, to me, his struggles are not some ill-judged personnel decisions since wrestling control of that area; in fact, his issues mainly stem from the same thing that haunts most coaches at this level. Not having a quarterback.

A 24-18 record with Michael Vick, Nick Foles, Mark Sanchez and Sam Bradford is impressive. Damn impressive. I also applaud him for taking a risk on Bradford. He knew Foles wasn’t good enough and there was a possibility the former St. Louis Rams man might have been. Not everything Kelly has done has worked (a lot hasn’t), but I love seeing a guy come in and do things a little differently and, ultimately, view Kelly as a success story so far. If he does go back to college, which I hope isn’t the case, the 52-year-old will still have had as a great an impact as any coach in recent years. If you look at the league today, there are numerous innovations – increased use of unbalanced lines, extreme hurry-up and sports science – that can be traced back to Kelly.

The W That Wasn’t

There’s an interesting quote from Bill Belichick in NFL Films’ brilliant ‘Do Your Job’ documentary where the head coach reveals the time he knew New England could be something special last year was during their 41-14 drubbing at Kansas City. He probably already realised this term that his team was really good but, when the dust settles, I wonder whether he will remember this week’s loss to Denver similarly. Everything imaginable went against the Patriots at Mile High, and yet they still should have won.

Leading 21-7 early in the fourth quarter, they saw Chris Harper – a practice-squad player a fortnight ago in the game due to the devastating injuries New England have suffered – muff a punt that gave Denver a sniff. Then the officials provided the hosts with a huge helping hand on several plays, most notably when throwing a flag for a phantom hold call that gave the Broncos first and goal from the three rather than third-and-goal from the 19 towards the end of the fourth quarter. Oh, and the Patriots also lost Rob Gronkowski to injury and Tom Brady still engineered a game-tying, field-goal drive with just over a minute to go. The prognosis on Gronk seems good, and New England – whose remaining games are against Philadelphia, Houston, Tennessee, the Jets and the Dolphins – are still a game in front of AFC rivals Denver and Cincinnati, who have much tougher schedules. They say there are no moral wins in football, but that was as close as you can come. 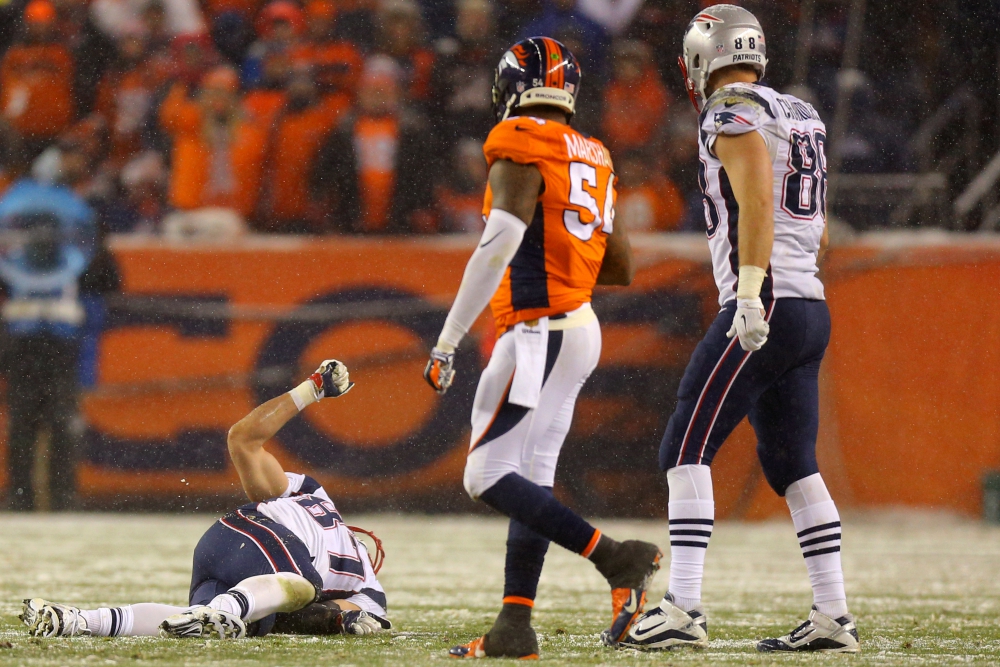 The one thing that seems certain after Sunday is that Peyton Manning won’t be getting Denver’s starting job back anytime soon. Brock Osweiler will be credited after some big-time late throws in this game, even if the biggest star was C.J. Anderson. Denver’s running game was going again, although I’d temper the optimism a little with the following stat. While Dont’a Hightower, the Pats’ stud linebacker who left the game late in the second quarter was on the field, the Broncos averaged around two yards per carry compared to eight with him out. With Jamie Collins also missing the game, that was far from a stellar linebacking corps on the field for New England. Jerod Mayo is not the guys he used to be, Jonathan Freeny is athletic but raw and Darius Fleming has just been activated from the practice squad. Given Hightower isn’t suffering from too serious an ailment, Denver will face a different defense should these teams meet again.

It may be an unpopular belief this season, with Newton leading the Carolina Panthers to 11-0 on the back of performances that have him high in the MVP discussion, but give me Russell Wilson over any young quarterback in the NFL. The biggest trait I look for in passers is the ability to rise up in big situations and Wilson has done just that time and time again over the course of his career.

Make no mistake, Sunday’s tilt with the Pittsburgh Steelers was make-or-break for a 5-5 Seattle with trips to Arizona and Minnesota featuring on a tough run-in. Had you told me before the game that Pittsburgh would have scored 30 points, I’d have given the the Seahawks little chance of winning given Wilson has been pressured on over 40% of his drop backs, a league-high number. However, with the year potentially on the line, the signal-caller responded by throwing for over 340 yards and five touchdowns for the first time in his career. While the defensive struggles remain concerning, Wilson’s ability to rise to his best level when everything’s on the line means Seattle are a team to be feared still. 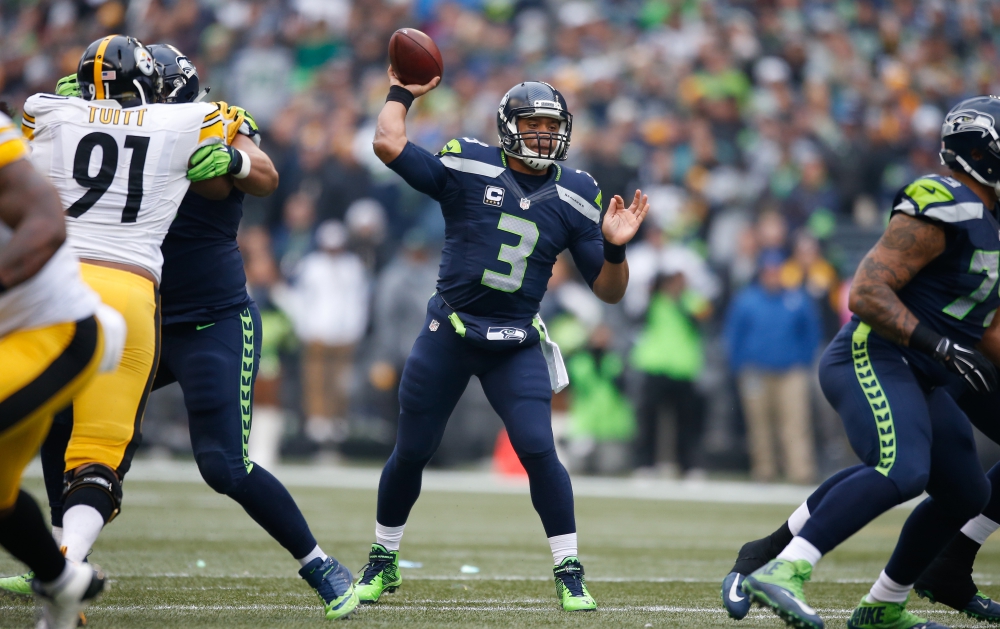 If any fans of a team have a right to be angry this Sunday, it’s those of the New York Giants. That was a disgraceful performance in a big divisional match-up against Washington on Sunday. Big Blue were dismantled by a team who have no business leading any division when coming off a bye week. Truthfully, I’m not sure it can get worse. It’s the kind of performance that would make me look closely at Tom Coughlin’s position if the Giants don’t make the playoffs.