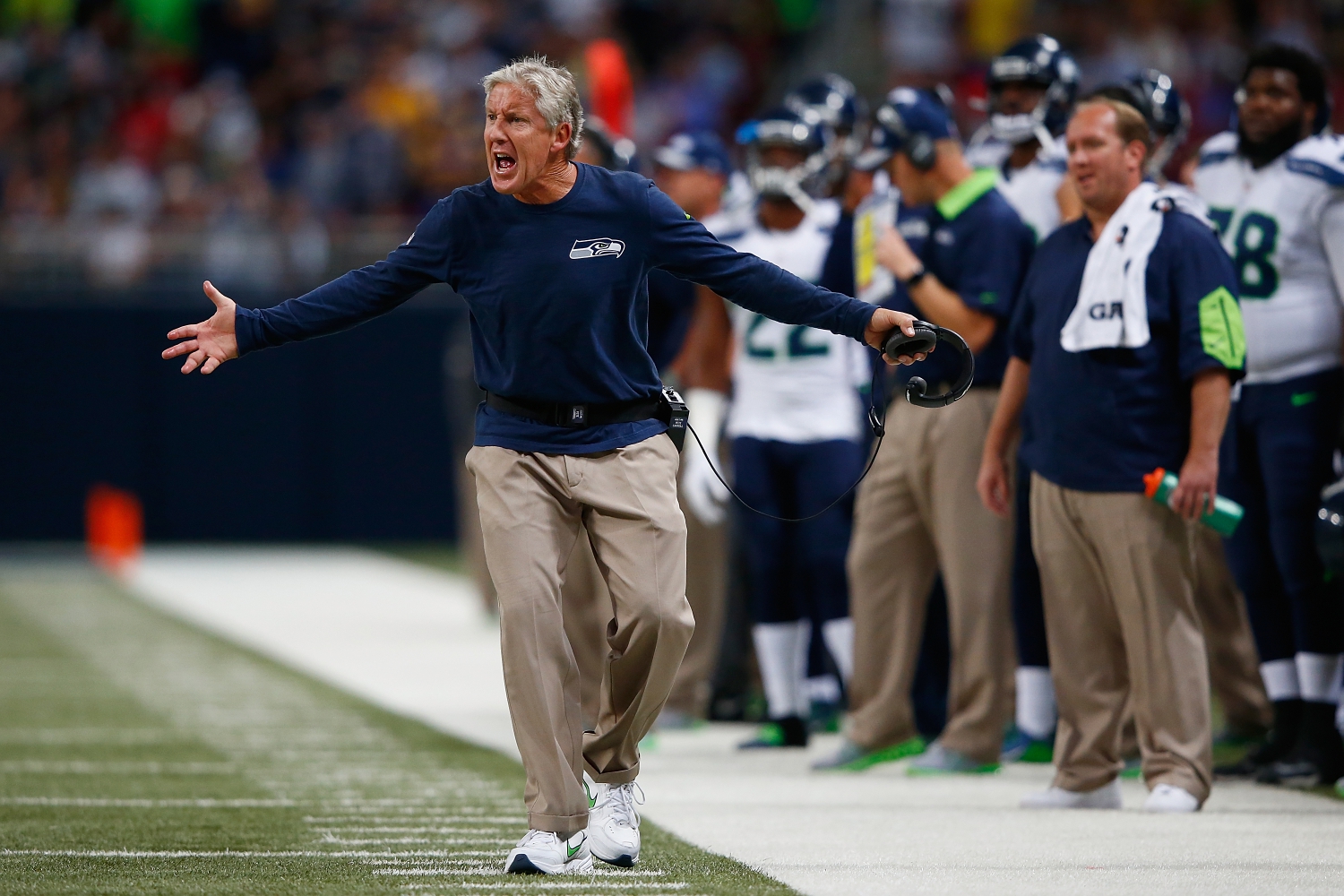 Week 1 is in the books and, as expected, there is plenty for Matthew Sherry to chew over. The Gridiron editor discusses everything from contracts to clock management in this week’s Tuesday Morning Touchdown.

Could the Seattle Seahawks have lost in a more miserable way? With star safety Kam Chancellor holding out as he chases extra dollars despite having three years left on his current contract, his replacement Dion Bailey’s costly slip (check the site this week for more on him) paved the way for the Lance Kendricks touchdown that set up overtime. And so the questions is not if the Seahawks will cave to Chancellor’s demands, but when.

If I’m general manager John Schneider, though, I hold firm and make it clear that Chancellor has two choices: 1. Accept you’re already making a fortune and play (he’s missing out on around $200,000 per game by sitting out), or 2. Head to another team. Restructuring the contract of a player already earning substantial money is a ridiculously bad precedent to set. And while Chancellor is the undoubted best strong safety in the league, I’d back Seattle – with the likes of Sherman, Thomas and a defensive line set to be even better – to still put a good enough defense on the field. A desperate team is sure to overpay for a guy like Chancellor and perhaps Seattle could even manoeuvre the situation to improve the clear problem on their roster: a dreadful O-line that unsurprisingly gave up nine quarterback hits in the Week 1 loss to St. Louis.

On The Subject Of The Rams…

To say this is a big year for St. Louis head coach Jeff Fisher is some understatement. His squad have headed into seemingly every campaign since 2012 as a sleeper team and then, well, just slept. That has to change this time around, especially having begun 1-0 and overcome the giant of their division. The main reasons to believe it can? Aaron Donald, who looked J.J. Watt-esque in wrecking a Seattle offensive line touched upon in this column last week; and Nick Foles, whose superb Rams debut was highlight by a throw that might be the best we see all year. I’m still unconvinced by the former Philadelphia Eagle, but that ball he dropped between Richard Sherman and Earl Thomas (of all duos) and into the hands of Stedman Bailey to set up the game-winning field goal was spectacular. 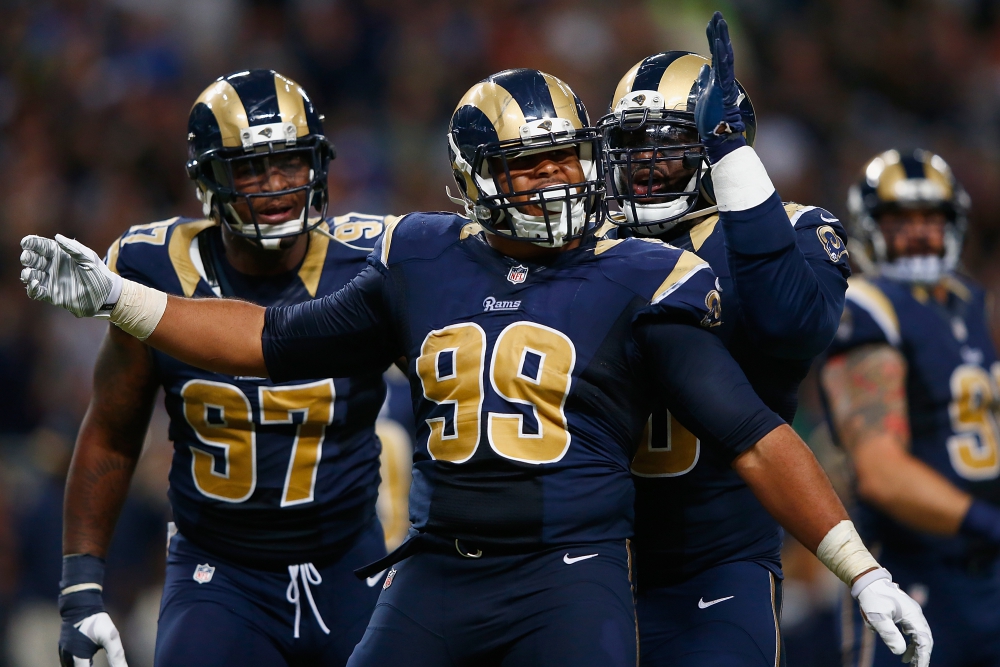 The Upset That Wasn’t

It was unsurprising to me that, in a meeting of underrated and severely overrated, it was the former that came out on top. People headed into the season forgetting about the Buffalo Bills, all the while falling over themselves to tip the Colts as the AFC’s obvious Super Bowl team. Unfortunately, these Colts are the same as they have been the last few years. Their defense falls apart in big spots because they can’t stop the run and Andrew Luck is vastly overhyped by analysts who staked their reputation on him pre-draft. Is he good? Of course. Will he be great? Probably. However, he’s not their yet. Luck was the second-most turnover-prone quarterback in the league last year behind only Jay Cutler and yet the vast majority of commentators were declaring him as the next-best quarterback behind Aaron Rodgers going into the campaign. Give me Brady, Romo, Roethlisberger, Ryan, Brees, Rivers and, yes, Wilson first.

As for the Bills, they’re just terrifying. Their roster is loaded on both sides of the ball, but it’s that amazing defense – arguably the best unit in the league – which really catches the eye. And it’s a squad now being led by the game’s premier defensive strategist (yes, that includes Belichick). Rex Ryan is, for want of a better word, a genius. And he’s a genius overseeing a group boasting a terrifying front seven and a guy in Stephon Gilmore who, with Atlanta’s Desmond Trufant, is the best young corner in the league. That combination will be lethal, so much so that no team – including the defending champion New England Patriots on Sunday – will relish playing Buffalo this year.

Undoubtedly the most disappointing part of Week 1 was seeing four teams I really believed could take a step forward live up to their reputations. The Cleveland Browns, who looked solid under rookie head coach Mike Pettine last year, imploded in New York; the Oakland Raiders, boasting more talent than ever before, stunk against Cincinnati; the Jameis Winston-led Tampa Bay Buccaneers got blown out at home by the Tennessee Titans; and, most disappointing, the Jacksonville Jaguars managed just nine points in a winnable home opener against Carolina.

So bad were their efforts that all four teams’ head coaches will immediately come under the microscope. Some will attribute Tampa’s loss to having a rookie quarterback who needs to shake off a penchant for picks, but the real worry was some dreadful play on defense. It’s that which must improve most, although I get the sense we’re what seeing Lovie Smith really is: not a very good coach. The same can be said of Oakland’s leading man, with the bizarre hire of Jack Del Rio looking an even bigger head-scratcher after a listless opening performance from the Raiders. When it comes for the other two, I struggle. Pettine looked really good in his first year, but now appears to be succumbing to the horrors of a doomed franchise. Bradley, meanwhile, is an unbelievably likeable guy who inherited a mess. However, with the Dolphins and Patriots next on the schedule, it’s looking like an 0-3 start, which will be incredibly tricky for the third-year man to overcome.

Can The Butler Do It?

Spoiler alert for those still to read it: we included new Pittsburgh Steelers defensive coordinator Keith Butler in our 20 Defining Figures of 2015 for Issue XV. He is replacing a living legend in Dick LeBeau and taking over a defense that, truthfully, isn’t very good. It’s difficult to envisage him getting off to a worse start. Yes, there is a talent deficiency, but the Steelers – on opening night – were a disorganised mess, and that just isn’t good enough. The amount of times they were either not lined up correctly or seemingly struggling to understand the call was staggering. The three touchdowns to Rob Gronkowski (somehow the 6ft 7ins monster was uncovered on two of them) were bad enough, but the lowest moment came in the fourth quarter when, having just reduced the deficit to 21-14, they left the tight end uncovered for a 52-yard catch on the first play of the Patriots’ response. So you make it a one-score game and then leave that guy that open. Really?!

It was a moment that spoke to a wider issue with Pittsburgh. We think of the Steelers as a model franchise, but they’ve been let down by some staggering mismanagement this off-season. It’s illustrated best on the secondary, where they spent four draft picks. The results? Second-round selection Senquez Golson is on IR (admittedly, not their fault); fourth-rounder Doran Grant only made the practice squad; seventh-rounder Gerod Holliman was waived and Brandon Boykin, acquired from the Eagles for a conditional fifth-rounder, didn’t play a single defensive snap. I’d expect Mike Tomlin, still a fine coach, to sort the issues out, but it’s been a shocking few months. 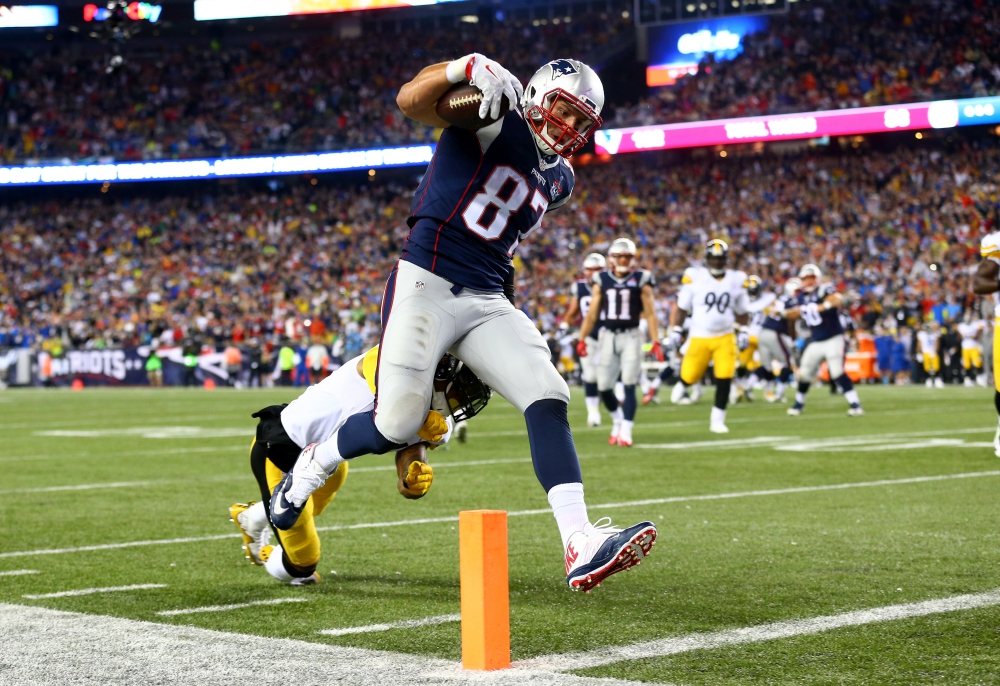 After watching Eli Manning and Tom Coughlin – one of the league’s most experienced head-coach and quarterback combos – spectacularly fail in the art of clock management and gift-wrap Tony Romo the chance to lead the Dallas Cowboys to an unexpected 27-26 win on Sunday Night Football, I’m now more convinced than ever it’s time for teams to employ a specific person who just focuses on the clock come gameday. Frankly, too many coaches – even the most experienced – get it wrong for it to be coincidence. Clearly under the huge spotlight and when the pressure cooker turns up, the clock becomes an afterthought. When that’s the difference between a W and an L, it’s time to act.

As an aside, how bloody spectacular has Tony Romo become? He was my MVP last season and showed no signs of slowing down against the G-Men. In a typical Cowboys game of the early-Romo days, everything went against him. Two picks off the hands of receivers, and a Cole Beasley fumble costing Dallas 17 points. Romo’s response was incredible. With the league’s best receiver sitting in the locker room due to a broken foot, the quarterback went 11 of 12 for 147 yards and two touchdowns to seal victory. Not only is Romo elite; he might just be the best quarterback in the game right now.

Was there any game that displayed the NFL’s unpredictability quite like the weekend’s finale. The San Francisco 49ers most expect to be rubbish taking on a Minnesota Vikings who are everybody’s dark horse. The result? An easy win for the 49ers. Perhaps that explains why yours truly went a disappointing 9-7 in Week 1 of our Pick ‘Em game!