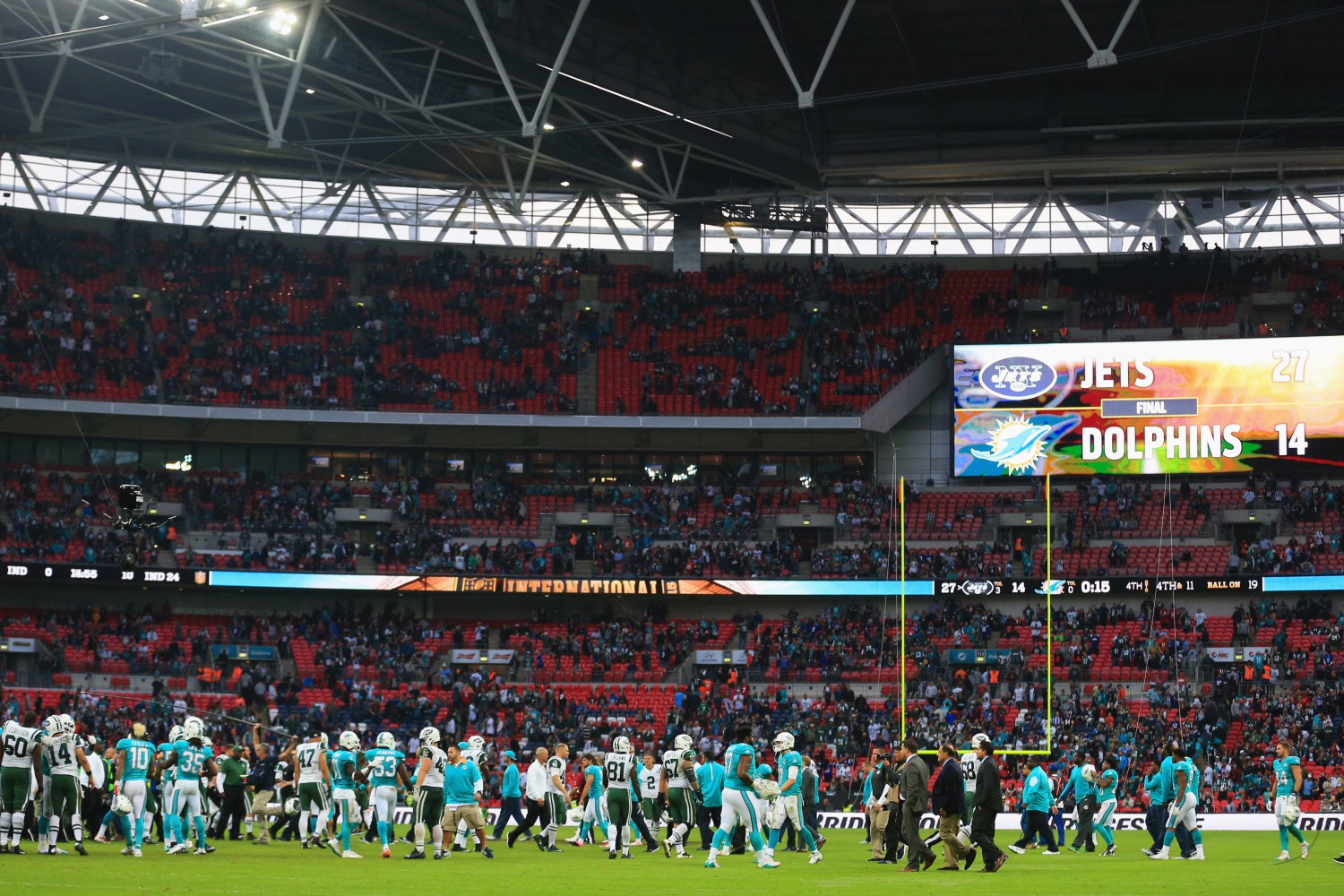 Week 4 began in Pittsburgh, kickstarted in London and ended in Seattle. In between, there were controversies, upsets and the season’s first head-coach firing. Gridiron editor Matthew Sherry picks the bones out of the action.

They Quit On You, Joe

There was a telling moment in the Miami Dolphins’ locker room following their demoralising showing in a 27-14 loss to the New York Jets. Jarvis Landry, the man who threatened to single-handedly drag his team back into a game they trailed 27-7 heading into the fourth quarter, was asked about Joe Joe Philbin’s startling admission that he hadn’t always seen the necessary effort from Miami this year. A visibility distraught Landry, sat staring at the ground as he had throughout the interview, replied: “I play with all of my heart, and you’re always getting my best every time I’m out there.” If that was a perfect insight into the Miami’s wide receiver’s mindset, then his reaction to the follow-up enquiry of whether the rest of the Dolphins were showing the same endeavour spoke volumes of his team-mates. There was a shrug and a stumble for words before one of the club’s media managers intervened and ended the availability with him.

The ugly truth is that many of Miami’s players were clearly disinterested. They quit on a coach whose position was untenable. It’s not just Ndamukong Suh. The sideline at Wembley was like a scene from a morgue. There was no energy, no spark. Even when a Dolphin was clearly hit out of bounds, there was minimal fuss outside of a few hand waves. In fact, the only moment of real emotion was provided by Landry as he stormed off the field and had to be calmed down having been bizarrely taken out of the game for a play. While the players deserve a lot of blame for such disinterest, the task of inspiring falls on one man: the head coach. It’s for that reason Philbin fell on his sword. 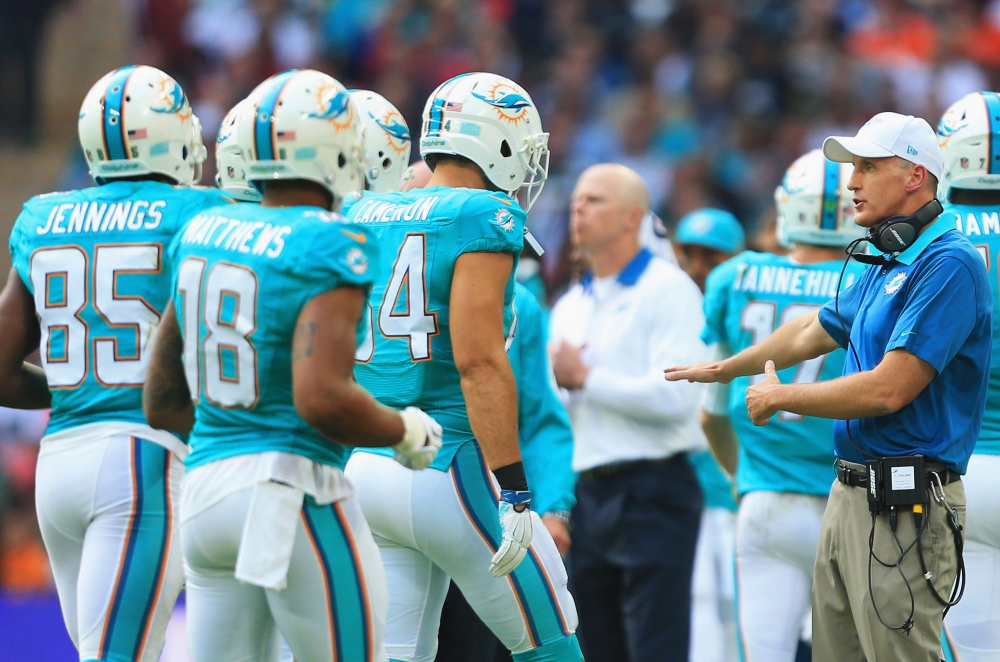 While an obvious lack of desire among players is a major issue, it wasn’t the main one in London. That accolade goes to the offensive play-calling which was, for wont of a better word, offensive. Miami moved the chains once on their opening four possessions, a period during which Bill Lazor called a play-action pass on three of four first downs. That’s a play which is predicated on having a running game established – something Miami hasn’t even attempted to do for four games. And that wasn’t even the worst part. This sequence, with the Dolphins on the verge of making it a one-score game, was staggering:

The bare numbers are depressing for those from South Beach. Miami we 0/12 on third down, 0/4 on fourth down and the pass:run ration was around 5:1. Ryan Tannehill doesn’t have the freedom to make checks at the line and call audibles because, apparently, his coordinator is too good to get it wrong. After Sunday, such thinking looks even more questionable.

The New Jets are 3-1 and their head coach Todd Bowles appears to be everything his opposite number on Sunday isn’t. They, statistically, boast the best defense in football, and that’s with Sheldon Richardson returning from suspension this week. And yet, the Jets still threatened to let Miami back into a game some of their players didn’t want to be in at Wembley. The main problem is quarterback Ryan Fitzpatrick, who has long stretches of games where he resembles a blind man with the arm strength of an eight-year-old. Perhaps the biggest indictment of the Dolphins is that they only managed to intercept the quarterback once despite him throwing at least five passes that should have been picked off. Outside of some big scrambles, the bearded wonder was dreadful on Sunday – and it’s difficult to know how far Bowles’ Boys can go with him under centre. 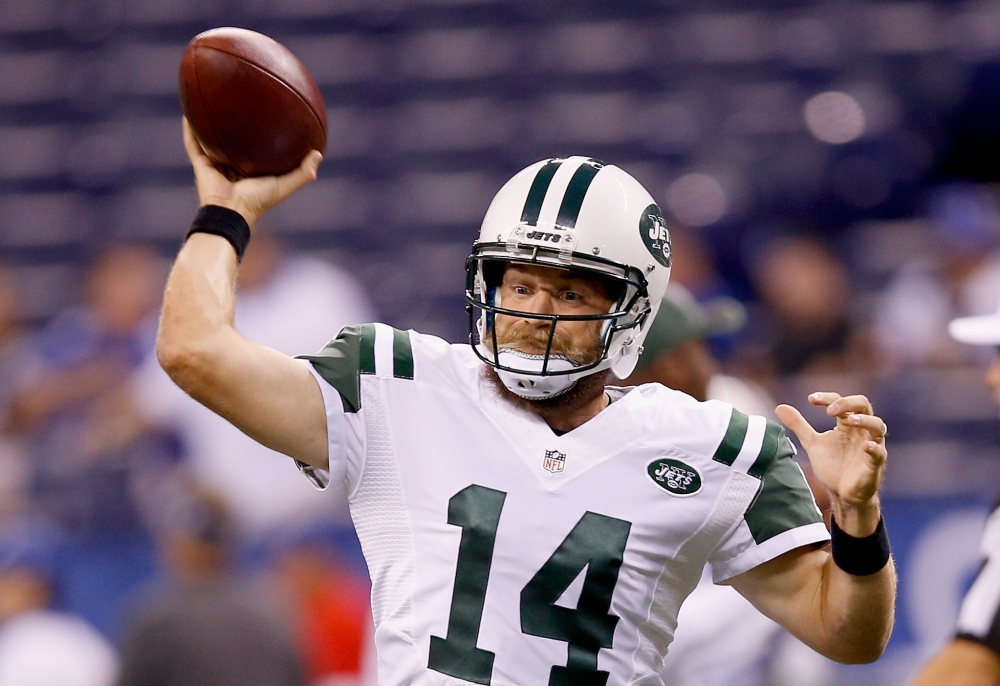 The Consistently Inconsistent: Part I

It’s a maddening unpredictability for Rams fans, who must be desperately hoping Todd Gurley is the missing piece to take them over the top. The former Georgia star is a throwback, the kind of transcendent runner you can focus an offense around. He’s the perfect foil for a finally-breaking-out Tavon Austin and, given the quality of the St. Louis defense, this could finally be the year when they go from dark horse to champion thoroughbred. Or perhaps, they’ll be Shergar one week, donkey the next…

Speaking of teams you can’t predict from one week to the next, this is what the Buffalo Bills have done so far:

That was an ugly loss Sunday, at home against an average Giants team. The same fans chanting ‘We want Brady’ after the Week 1 triumph over the Colts were booing at half-time. The Bills, with that roster, should make the playoffs. But what’s holding them back is also what’s making them relevant: Rex Ryan. They say a team takes on the personality of its coach and the Bills are so Rex. They’re ‘rah rah’, nasty but, most importantly, ill-disciplined. Having already led the league in penalties, Buffalo gave up a Week 4-high SEVENTEEN accepted penalties versus the Giants. I love Rex, and think he could be a fantastic coach, but he needs to look adjust his style slightly. 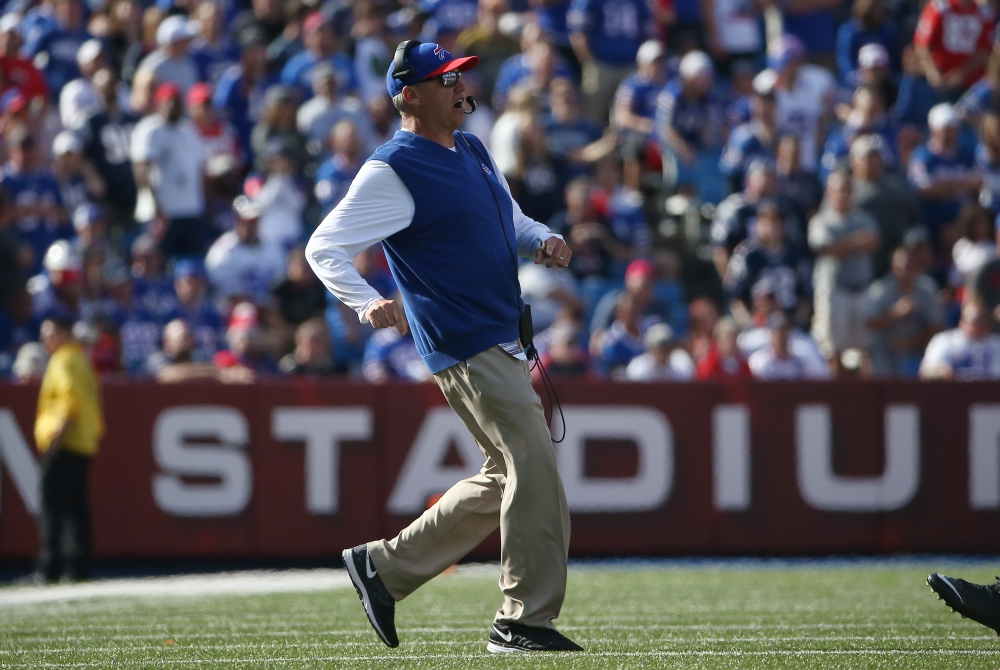 The Philadelphia Eagles have played two halves of fine football this season. They destroyed the Atlanta Falcons in the third and fourth quarters of their Monday Night Football season opener, only to lose the game at the death. And they cruised into a 24-0 lead versus a New York Jets team that are 3-0 over all other opponents. The problem? They’ve been shut out completely in a staggering eight of 16 quarters this season. Many columns are being written about Chip Kelly being labelled a genius too soon and, right now, some of his decisions look a mess. However, the Eagles could easily be 3-1, and that’s with Sam Bradford looking a disaster for significant stretches. I still believe in Kelly, but it’s now or never. The Eagles’ next two games: New Orleans at home, Giants at home. 3-1 today could easily be 3-3 in a fortnight.

I hate boneheaded plays in the NFL. There are plenty around, from defenders catching interceptions on fourth down to players going out of bounds when trying to run out the clock. How refreshing, then, to see rookie Gurley, in his second game, showing us all how it’s done. In the dying embers of the game, having gained a first down on third and 12 with St. Louis leading 24-22 and Arizona out of timeouts, the running-back had just a safety to beat for his first NFL touchdown. The problem, though, was a touchdown and a missed extra point would have left the Rams up eight points with time for Arizona to potentially come back. So Gurley simply fell to the ground and won his team the game. On a night where this difference-making ‘back broke out, that was his best play.