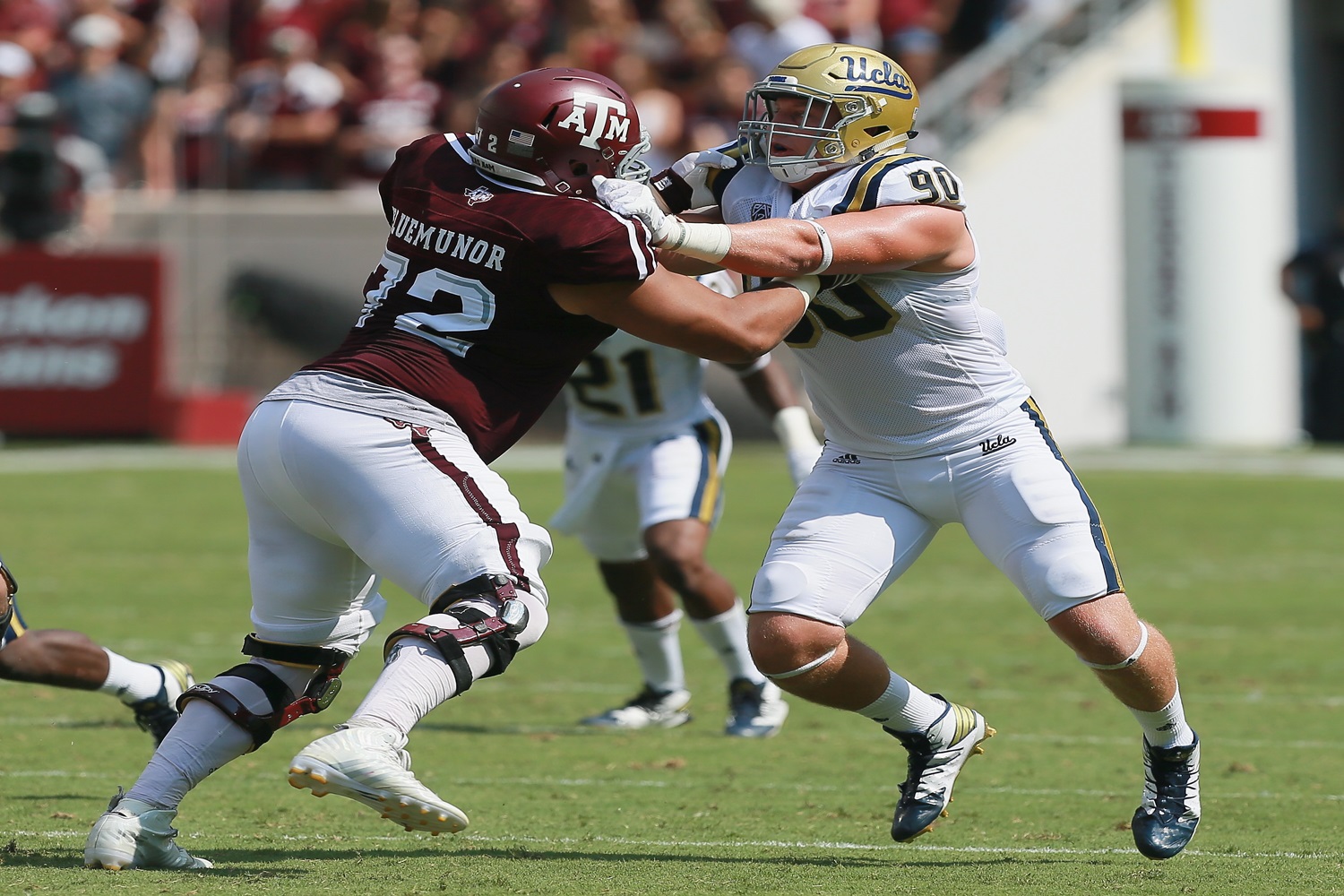 At 14 he and his father, John, had moved to New Jersey from London, where Jermaine’s mother and three other kids remained. “He knew for us to be successful we would have to get out of London because there wasn’t too much to do,” Jermaine explains. “At first he wasn’t too keen because we were moving from my family but the more he thought about it the more he thought he had to do it because it was going to be better for us in the long run.”

Eluemunor Senior had left Nigeria for London at 14 himself and it was that age that his son, who had grown up telling friends “I’m going to move to America one day”, went Stateside. Yet in his sophomore term, the pair came back. “Things weren’t really working out, things were really hard,” Jermaine says. “My mum and dad wanted to stay.” Their son was less enamoured with such a prospect. He had been bitten by the American football bug ever since he was channel-hopping and found the Giants-Dolphins Wembley game in 2007, and he envisaged his future on the Atlantic’s other side. “I told them I knew if I came here I was going to be successful. You just need to give me the opportunity. I was basically begging them to give me one more chance. It was a really emotional time but they finally said, ‘We’ll give it a shot’. Hopefully soon I will make good on my promise to them.” 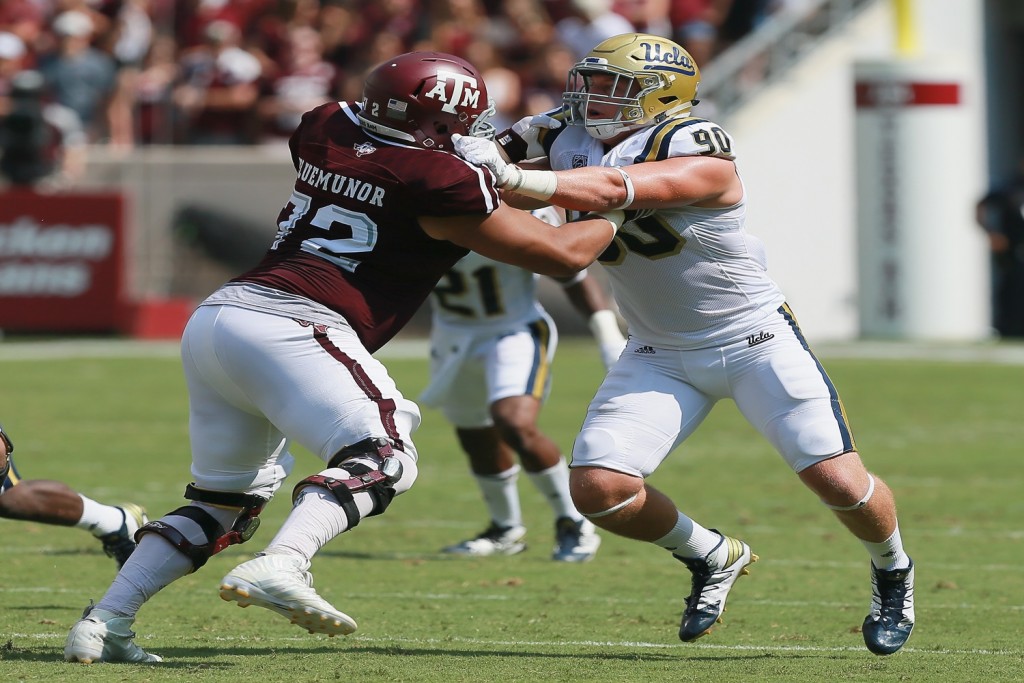 Eluemunor grew up in Camden where he partook in sports most British boys do. Already 5’10” and 270lbs by 10, he was a rugby prop who approached that activity with more relish than others. “They would have us playing cricket,” he explains. “I do not like that sport.” He did like American football as soon as he witnessed the Giants and Dolphins venture over when he was 12. Hooked by that muddy mess? Eluemunor laughs. “You have so many different pieces to the puzzle and that’s what I found interesting. The more I researched it, the more I fell in love.”

The website ‘NFL Rush’ became his manual and Giants offensive lineman Shaun O’Hara his guide as Eluemunor absorbed all he could from the various educational games. His practical lessons came during flag-football sessions with the London Blitz at Finsbury Park but Eluemunor craved the real thing – something he only got when he enrolled at Morris Knolls in New Jersey.

Eluemunor had a grounding but trying to stand out alongside his peers was nigh-on impossible at first. “I didn’t know what I was doing so I didn’t get on the field until my senior year. I was a big guy, but football-intelligence wise, I just wasn’t really there.”

In fact it was another sport where he excelled. Wrestling. As a senior Eluemunor went 34-4 and reached the State finals only to finish second to “a little chubby kid”. The pain of the loss has not subsided. “It still annoys me to this day. Sometimes you’ve got to lose in order to win.” 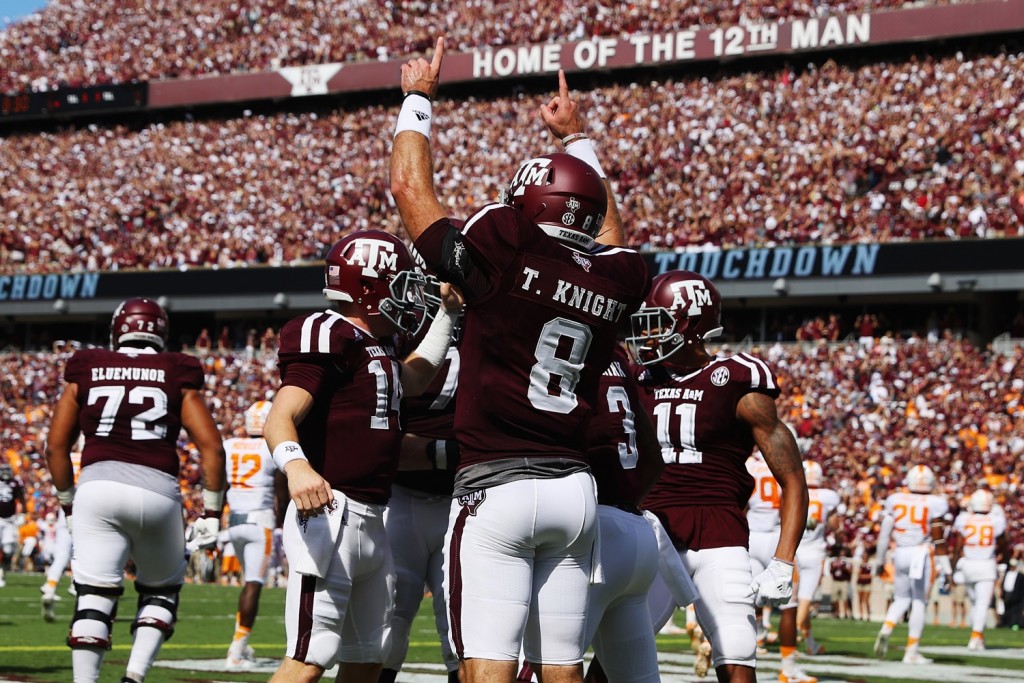 A route to the WWE was not for Eluemunor anyway. He was emailing Division I and II schools about football scholarships, though with limited film the raw prospect was left selling himself. He estimates 600-odd emails were sent out, but the few replies he received offered little encouragement. A prep school was too expensive so it was at Lackawanna, a junior college in Scranton, Pennsylvania, where Eluemunor, now going by the nickname ‘London’, landed.

‘London’ was considered “a guy waiting to be found” by his head coach Mark Duda. To help him find his feet quicker, tough love was prescribed. “He got coached very hard,” Duda recalls. “I don’t know if at 17 he was ready. I think it hurt his feelings. When you yelled at him he would go into his shell and take it personally. In his second year he realised we weren’t yelling at him, we were trying to improve him. It just took a little time. Not many 17 year olds would be ready for that.”

By the time the penny dropped Eluemunor was coveted by several college powerhouses, some of whom had deemed him not good enough only two years earlier. “I guess I kind of held a grudge. If I wasn’t good enough to play for your school then, why am I good enough now?” Texas A&M had not dismissed him and so in 2014, Eluemunor headed for College Station.

A redshirt campaign followed and in 2015 he did not make his first start until the Music City Bowl. However, in 2016, under the tutelage of former Miami Dolphins O-line coach Jim Turner, Eluemunor broke through with 13 starts at either guard or right tackle. It was one that would set him up for the professional ranks, where he can deliver on the promise he made his parents upon leaving England. “I want to show kids playing football in London that it’s not a bad thing to dream. You’re going to have people telling you you can’t and you’ll be behind. If you’re willing to put in the work and dedication it takes to make it here then anything is possible.”