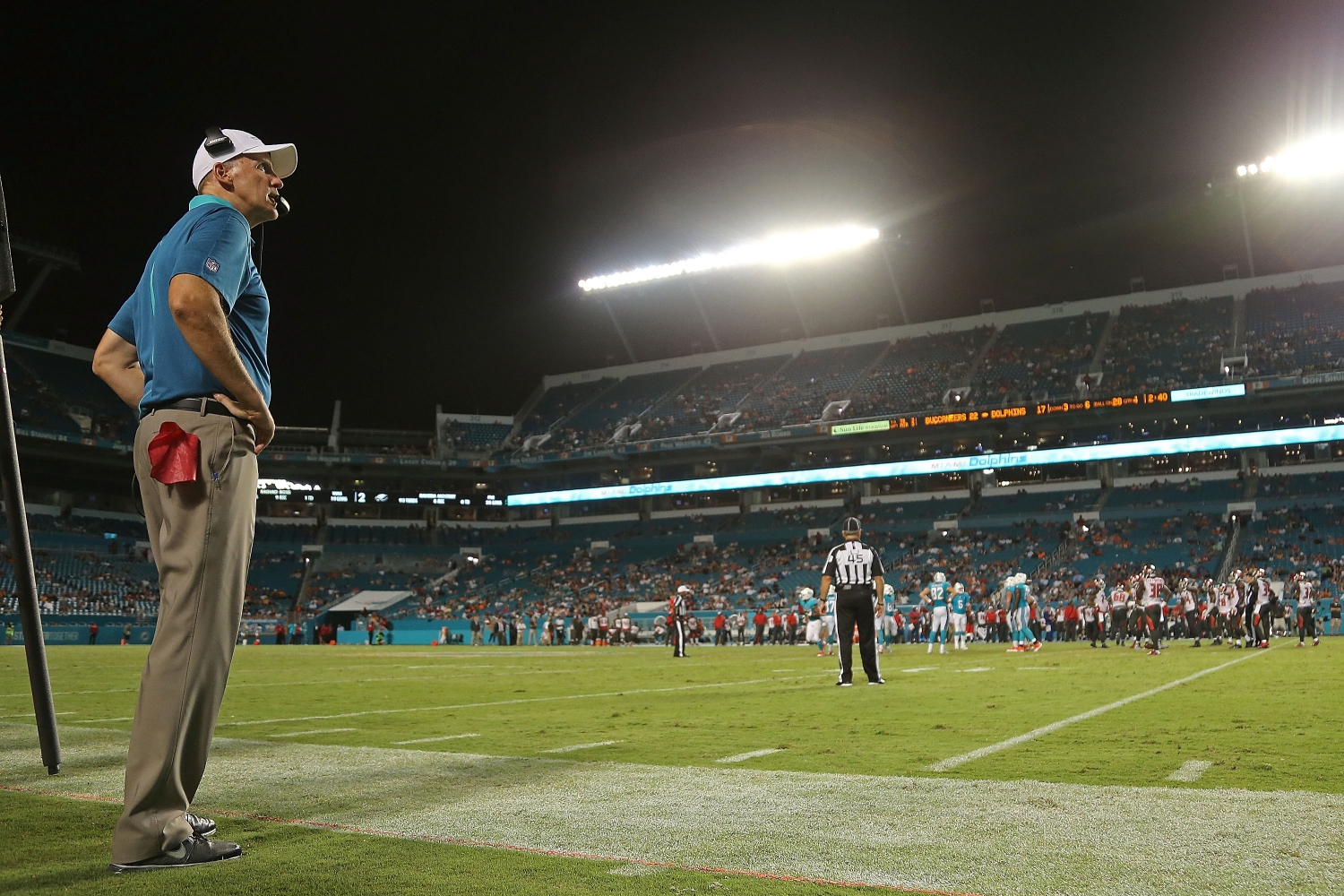 Week 3 is in the books and standings are beginning to take shape in the NFL. A Baltimore Ravens team that were many experts’ pre-season darlings are 0-3 and a Carolina Panthers team few believed in are 3-0. Gridiron editor Matthew Sherry attempts to make sense of it all in this week’s Tuesday Morning Touchdown.

To kick off this week’s column, I’m handing over the reins to Gridiron’s lead feature writer – and, most importantly, resident Miami Dolphins nut – Simon Clancy for a guest entry.

They say a team inherits the personality of its coach. Is it any wonder, then, that the 2015 Miami Dolphins are weak, meek and underwhelming? In a truly abject performance in the home opener against Buffalo on Sunday, Joe Philbin could merely stand and watch as the team he put on the field capitulated. He was helpless. He was hapless. As the crowd booed and his players gave up in front of his eyes he looked on like the dead man walking that he most assuredly is. There is no comeback from this. There can’t be. Sure, owner Stephen Ross treats Philbin like a son – last year’s contract extension announced in the locker room after yet another home defeat that ensured Miami missed the playoffs for the third time in his three seasons is evidence to that. But even billionaire ‘fathers’ need to say enough is enough and end this misery, this malaise that has fallen over a once-great franchise.

When the Dolphins went 1-15 in 2007, they generally got what they deserved. Bad coaching and bad players was a lethal combination. But eight years on there’s no excuse for bad players because Miami’s roster is full of talent. However, they’re underperforming on a level few could have envisaged. Their weaknesses are being exposed drive after drive and yet Philbin just stands and watches. He knows that his players have stopped playing for him. He knows he can’t galvanise them any more, if he ever could. The Dolphins run of average head coaches is almost as bad as its run of bad drafts. Yet the wheel keeps turning and every year hope springs eternal that this might just be our time. And then the games begin.

Ross became a national figure of fun when he flirted with and lost out on Jim Harbaugh and Jeff Fisher. His team is a national figure of fun and his coach is the ringmaster of this absurdity. It cannot go on much longer. Maybe it can’t go on past this Sunday night. Surely defeat against the Jets will signal the end. Surely. And so Dolphins fans who’ve sat through so much loss over the past two decades are hoping that one more defeat will do the trick. Say it ain’t so? Sorry Joe…..you have to go.

I remember kicking off these columns predicting a season of struggle for the Carolina Panthers. How wrong do I look now? The issue with that comment was its ignorance of two massive factors Carolina have in their favour: that defense and, most importantly, Cam Newton. The fifth-year quarterback has been so good that if I had to pick my MVP right now, he’d be the guy. Yes, Tom Brady and Aaron Rodgers are redefining our expectations of quarterbacks by the week and Julio Jones is playing on an unprecedented level. But in this moment, through three weeks, Cam’s my guy. Just look at what’s around him. In the victory over the New Orleans Saints, who actually did some good things on offense with Luke McCown, his three main targets outside of tight end Greg Olsen were Tedd Ginn Jr., Mike Tolbert and Ed Dickson. That’s a specialist kick returner, a running-back-turned-full-back and a guy who’s been finished for three years. No Kelvin Benjamin? No problem. Cam just keeps winning.

It’s not just on the field he’s winning, either. Sunday’s win came after it emerged he’d found out a cancer-stricken Panthers fan was having a party for his 10th birthday, and turned up with an ice-cream truck. There were zillions of questions asked of Newton when Carolina selected him and he’s answering every one. 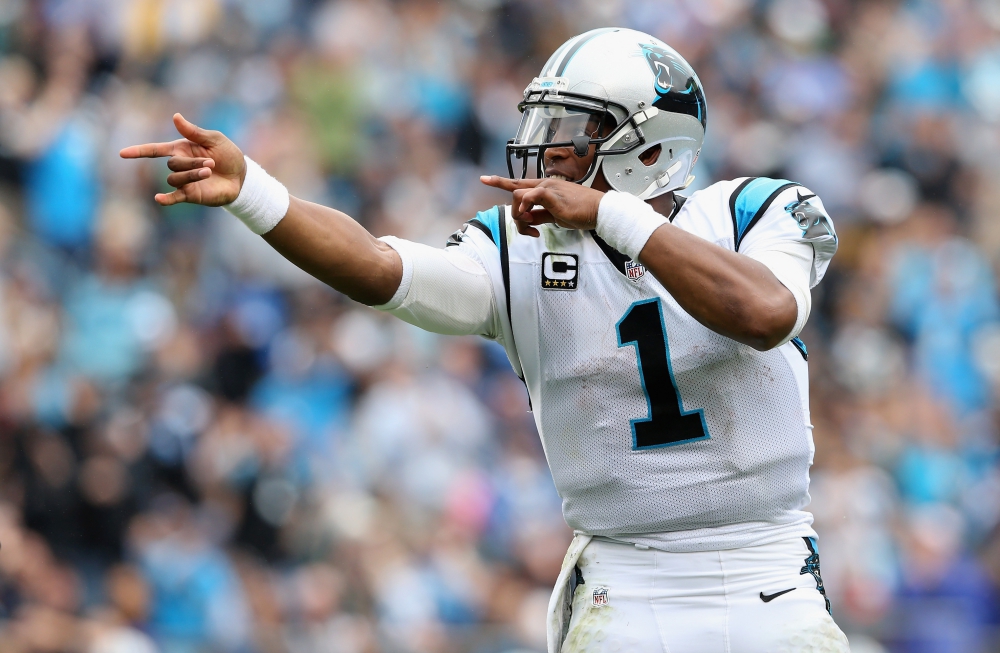 Season On The Line

The Baltimore Ravens are 0-3 for the first time in their history. Admittedly, they’ve only been around for 19 years, but that’s significant. This is a franchise that hasn’t know crisis. They have one of the NFL’s outstanding general managers in Ozzie Newsome (his understudy, Eric DeCosta, is the envy of the entire league too) and, to my mind, its second-best coach in John Harbaugh. And yet, they’re 0-3, largely because their secondary is a mess, their defensive leader Terrell Suggs is sidelined for the year and Joe Flacco is, well, Joe Flacco. And now, they face a season-defining game on Thursday night against their arch-rival Pittsburgh Steelers. Their hopes have been strengthened considerably by the absence of Ben Roethlisberger, who seems likely to spend the next six weeks on the sidelines. Harbaugh’s teams usually come up big when needed, and now they need to. It’s win-or-bust… in Week 4… for a team that were many people’s Super Bowl pick. That’s why we love the NFL.
[field “GOIN42WK4”]

When I watch the NFL every week, there are a few teams I feel sorry for. They’re not the obvious ones like the Browns; instead, it’s those in NFL hell. What am I talking about? Quarterback purgatory. That’s where your franchise finds a decent quarterback, one so good that you have to pay and play him, but not good enough that he’s going to add to the team’s jewellery collection. Think the Detroit Lions with Matt Stafford. Perhaps the biggest example right now, though, is the Kanas City Chiefs and Alex Smith. Kansas City have a legitimate team, with an elite defense and three fantastic offensive weapons in Jamaal Charles, Travis Kelce and Jeremy Maclin. However, as we’ve seen in the last two weeks, everything is undermined by having a guy pulling the strings who is painfully limited, especially against the league’s better quarterbacks.

I love a lot of what Tennessee Titans head coach Ken Whisenhunt is doing with Marcus Mariota. He’s tailored an offense around his young passer’s skillset, albeit while trying to avoid the emphasis on running. That’s smart, especially when you look at somebody like Robert Griffin III, for whom taking off quickly became his second read and has undermined his career ever since (STAT ALERT, Mariota has more touchdown passes (8) than rush attempts (5) so far in his NFL career). However, there are times when you have to use the likes of Mariota’s obvious speed and athleticism.

I can think of two occasions where the Tennessee Titans were stuffed on the goalline in the game against Indianapolis they had no business losing. On the first, they weren’t able to convert a first-and-goal from the one-yard line and settled for a field goal; on the second, they failed to punch in the two-point conversion that would have forced overtime. Just once, it would have been nice to see what, to me, is the obvious play-call: a naked bootleg. Think about it. Even if the defense is ready, good luck getting a guy out there who Mariota can’t just beat for speed. Perhaps they’re saving it for down the line, but that was a real opportunity to go 2-1 and send your biggest rivals to 0-3 with a crucial tie-breaker win Tennessee. 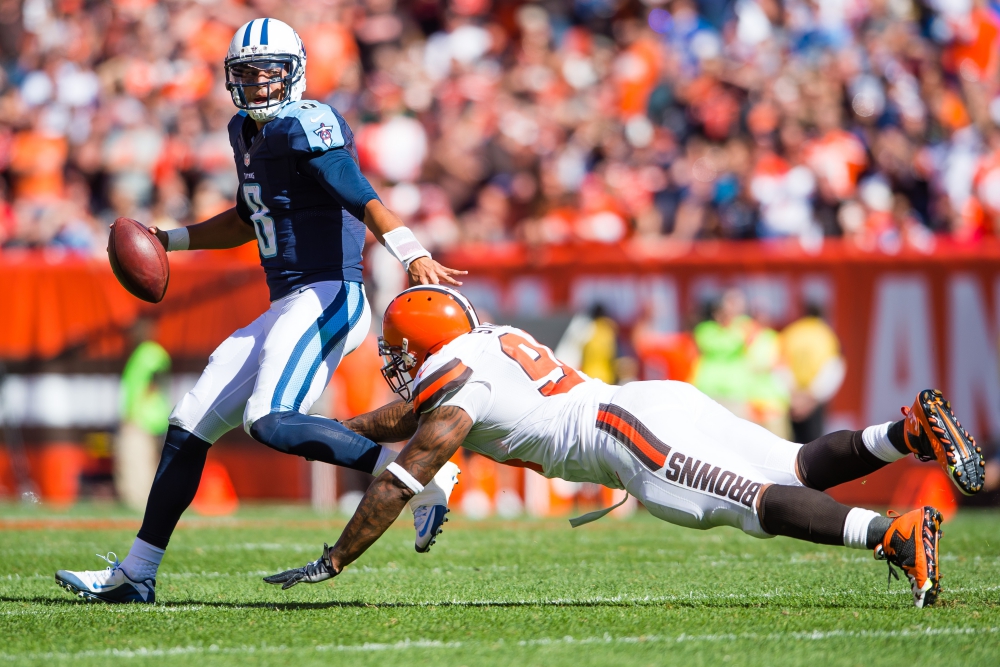 Kick Him Into Touch!

If I’m Tampa Bay Buccaneers head coach Lovie Smith or general manager Jason Licht, I’m bringing in former San Diego Chargers kicker Nick Novak for a tryout. Novak is inexplicably out of football, having made 22 of 26 field goals last year, including three of four from over 50 yards. The Bucs could certainly have used that kind of consistency in Houston on Saturday. Kyle Brindza has a big leg – as illustrated by him hammering over a 58-yarder with change at NRG Stadium – but he’s also ridiculously inaccurate for a professional. Following that monster, the rookie missed from 41, 33 and 51 yards, as well as an extra point. That’s 10 points. The final score? 19-9 Texans.

That was a tough loss to take for the Dallas Cowboys, who flew out of the blocks early but couldn’t finish. The Boys In Big D just needs Ws right now to set up Tony Romo and Dez Bryant for a late-season charge. But it’s not all bad news. Brandon Weeden looks better than previous years, the O-line reawakened that run game against Atlanta and Randy Gregory, Rolando McClain and, sadly, Greg Hardy will soon be on the field. Dallas could still have a shot at the Big Dance this year.