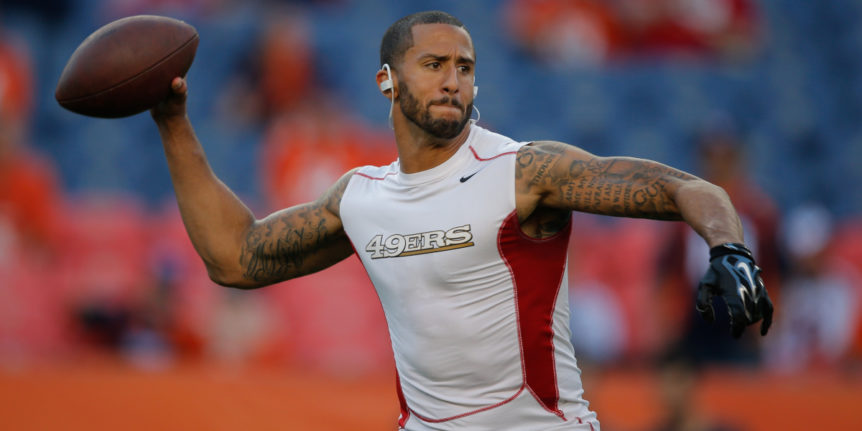 As a sports fan, you will be aware of just how hard athletes work to achieve the peak physical fitness they show off in their sport. Becoming a world class athlete doesn’t happen overnight; it is a long, arduous process of training, tapping into your talent, meeting the right people, and downright luck.

One thing that impresses spectators, when they witness amazing sporting feats from the stands, is the sheer muscle mass that athletes can achieve. Considering that all professional athletes undergo drug testing, meaning that they can’t use steroids to pump up that mass, it is even more impressive just how strong they become. NFL players have some of the most rigorous athletic regimes out there, but different sports have different muscle requirements and there are myriad ways to start building muscle like your favorite athletes.

Colin Kaepernick has attracted controversy throughout his career, firstly by taking the knee during the national anthem, and then by holding a workout that was witnessed by fans last year. However, the former San Francisco 49ers quarterback is also a football player with abs that you could grate cheese on. Okay, maybe not — although somebody should probably try it out — but how does he achieve this amazing body?

Controversy aside, Kaepernick’s workout consists of the usual American football training, throwing drills and agility practice. In addition, he is known to regularly do resistance training, such as weight lifting, to achieve his sculpted physique.

Dwayne ‘The Rock’ Johnson is world famous as a WWE wrestler turned actor and celebrity personality, but he also made a case for becoming a professional football player, having featured in both the NCAA and CFL before turning his attention to the ring. The incredible Hawaiian now weighs in at 118kg, standing tall and broad at 6′ 5″. His worldwide nickname says it all: he looks like a wall of pure muscle that you could very well stand on like a boulder on the shore!

How does Johnson achieve his physique, and could you look like The Rock? To put it bluntly, unless you had similar genetic makeup to the current co-owner of the XFL, it is very unlikely that a regular person could achieve this level of muscle mass. However, you can access his full workout plan to see just how he achieves it.

Firstly, ‘The Rock’ trains six days a week, with a rest day involving drinking tequila and eating mountains of cookies and donuts. His workouts begin with running, either outdoors or on the treadmill, for 50 minutes, before following a strict regime covering back, abs, legs, shoulders and chest muscles in isolated groups.

To build muscle mass like ‘The Rock’, the crucial thing to remember is that you need to exercise and increase your calorie intake in equal measure. If you only exercise more, you’ll wind up losing weight; if you only increase your calories without adding more resistance in your workouts, you will end up increasing your body fat without building muscle.

Another athlete who earns high praise for his incredible physique is Swiss tennis player Roger Federer, currently the man with the most grand slams titles under his belt..

Federer’s body is like a finely tuned, well-oiled machine, but the difference between Federer and an athlete like ‘The Rock’ is that while the bulky, more muscular, man has sheer power and strength, Federer requires increased agility for a sport like tennis.

Being lean like Federer takes dedication, discipline and work. The 39-year-old trains up to four hours per day because, of course, stamina is an essential part of playing a full game of tennis. Federer enjoys a complex diet, but he doesn’t over-indulge; his lean physique is the product of hard work and strict food intake. Pro tennis players don’t lift heavy weights much, as having bulky muscles doesn’t particularly help their game. Instead, they need finely tuned and agile joints and muscles to work together to keep them speedy and strong.

Serena Williams, one of the most astounding tennis players who ever lived, has legs of steel and these power her game, serving as a foundation to her incredible serve, forehand and backhand.

Believe it or not, Serena Williams doesn’t just train as a tennis player; she is highly trained in ballet, using the very different discipline to increase her flexibility, grace, balance and muscle tone. Barre classes are a phenomenal way to build leg muscle – you only have to look at any ballet dancer to realize that their thighs could crack concrete!

Overall, building muscle like an athlete is an arduous process. Follow your favorite athletes to see how they achieve their amazing figure – there’s no time like the present.