Seeking out your first job can be a stressful experience. The competition for entry-level posts in many industries is ferocious, and at times it can seem as though prospective employers are less interested in finding the right person than they are in tormenting candidates with cryptic interview questions.

Imagine going through that process, then, with millions of strangers watching you. That is what aspiring NFL players do each year at the Scouting Combine in Indianapolis. Over the space of seven days every February, more than 300 of the nation’s most gifted college football stars descend on the Midwestern city to be tested and scrutinised by the teams that they hope will hire them, but also the fans who tune in to follow it all from home.

Interest in the Combine has grown exponentially since parts of the event were televised for the first time back in 2004. Back then, NFL Network aired only one-hour segments at the end of each day, recapping the major developments from Lucas Oil Stadium, where players are put through a series of athletic tests and position-specific football drills. Now fans can watch every player’s workout live on NFL.com.

It is this element of the Combine that has always received the greatest media attention – the running, leaping and lifting. Observers obsess over vertical jump measurements and bench-press repetitions, allowing athletic potential to override their previous impressions of a player.

This year was no different. University of South Carolina defensive end Jadeveon Clowney recorded just three sacks last season, a huge disappointment after racking up 13 in 2012, but arrived in Indianapolis with the stated goal of becoming the first overall pick in May’s NFL Draft.

At his pre-workout press conference, many journalists seemed sceptical, asking hard questions about Clowney’s work ethic and willingness to put his body on the line. Then he ran the 40-yard dash in 4.53 seconds, an extraordinary time for a man who had measured in at more than 6ft 5ins tall and tipped the scales at 266lbs. Suddenly the narrative changed.
Scouting football players is an inexact science, and it is hard to know exactly how much stock individual teams place in these statistics. Some head coaches and general managers will have been more impressed than others at Clowney’s time, just as some will have been more concerned than others to see him struggle in the bench press – lifting 225lbs only 21 times.

But what we can say is that those numbers are only one small part of the overall picture. After all, many of the most important evaluations made by teams during the Combine take place behind closed doors, where – among other things – front-office staff conduct conventional job interviews with players. These sessions are hidden away from the fans and media, but we do know that some teams’ lines of questioning can become rather abstract.

Alabama wide receiver Kevin Norwood said one interviewer had demanded to know what kind of animal he would like to be.
“I never even thought about it before,” he confessed.

“I was asked, ‘In a minute, tell me how many things you can do with a brick,’” said Virginia Tech defensive end James Gayle during a round-table with journalists at the Combine. “Yeah, I didn’t get far … I know you could build a house, and you could build a wall around the house. That’s probably about where I got lost!”

There were plenty more variations on that theme, with some players reporting that they had been asked about what they could do with a paper clip. Others were questioned about which team they preferred to use in Madden video games. Alabama wide receiver Kevin Norwood said one interviewer had demanded to know what kind of animal he would like to be.
“I never even thought about it before,” he confessed. “I sat there for at least two minutes thinking like, ‘OK, I’m dependable. I’m a silent killer.’ So the closest thing I thought of was a snake, a python. Nobody hears it coming but, when it comes, it’s going to kill you.”

And then there are the more personal questions. Teams begin their research long before they arrive at the Combine, and one or two players confessed to being shocked at how much their interviewers knew about their past lives. Boston College linebacker Kevin Pierre-Louis told Gridiron that he had been asked about a scuffle at school when he was 11 years old.

“The guy was like, ‘So, you want to let me know what happened in sixth grade, when you were in middle school?’” said Pierre-Louis. “I was confused, because I only went to that school for a year, before going to a private school for seventh grade.

“I was kind of like, ‘Sixth grade?’ And he says, ‘Yeah, a fight you got in?’ and I started to chuckle a little bit, because I was just amazed that they’d dug that far back. Because, for one thing, I was thinking, ‘Who was even able to tell them that?’ and secondly it was just a misunderstanding – a kid had pushed my cousin, and I pushed them back.”

Players are also required to take a Wonderlic test – a multiple-choice IQ exam – to give teams a better idea of how easily they are likely to take on new concepts. Scores are supposed to be kept confidential, although many have leaked out through the years.

Louisiana State University cornerback Morris Claiborne scored just four out of a possible 50 in 2012 – 10 lower than the median score recorded by monitors in a 1983 survey – but would later claim not to have tried, saying: “All the talk that I was hearing about the Wonderlic is that it’s just not that important.” The evidence seemed to back that up, Claiborne getting selected nevertheless by the Dallas Cowboys in the first round of that year’s draft.

“[Doctors] are pulling on everything, your shoulders, your knee; they are trying to make sure that everything’s where it’s supposed to be.”

In truth, it is easy enough to question the importance of large parts of the Combine, especially when teams will evaluate most players they are interested in again during Pro Days hosted by their universities. It is for that reason that high-profile players often choose sit out drills in Indianapolis – neither of Johnny Manziel or Teddy Bridgewater, two of the top quarterbacks in this year’s class, threw passes this year – preferring to wait for a setting where they feel more comfortable.

That is why the single most crucial element is actually the one that players are put through on the first morning after they arrive. Starting at about 4am, they are shuttled from their hotel to a nearby medical centre for drug tests, after which they are given a short break to eat before being put through a physical exam the likes of which they have never experienced before.

“[Doctors] are pulling on everything, your shoulders, your knee; they are trying to make sure that everything’s where it’s supposed to be,” said Pierre-Louis. Even that is just the tip of the iceberg, however. Players undergo X-Rays, MRIs and blood work, as doctors look for irregularities in any of their major organs – from heart and lungs through to liver and kidneys.

For Pierre-Louis, those tests went fine. Indeed, he might have done more than anyone in Indianapolis to improve his prospects over the course of the weekend – going on to produce the best 40-yard dash time among linebackers (4.51 seconds) as well as finishing in the top five at his position in the bench press, 20-yard shuttle, broad jump and vertical jump.

Yet for others, such as Cyrus Kouandjio, there were concerns. NFL Network’s Ian Rapoport reported that several teams had failed the Alabama offensive tackle due to what was described as an “arthritic knee from failed surgery”.

That, much more than a bad 40-yard time, is the sort of news that can end a player’s career before it has begun. Because if the Scouting Combine is part job interview, then it is also part cattle market – all that weighing, measuring, prodding and poking designed to do one thing: make sure that the bodies of these expensive steers can hold up to the rigours of their profession.

If not, they will have to seek an alternative one. Unlike with most jobs, it is simply not possible to talk your way on to an NFL team. 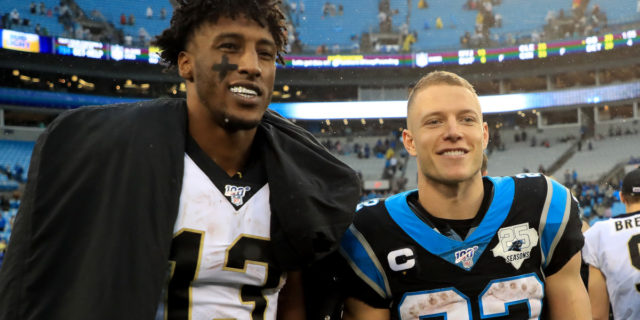 This article appears in the current issue (LXIII) of Gridiron magazine – for individual editions or subscriptions, click HERE We know f...