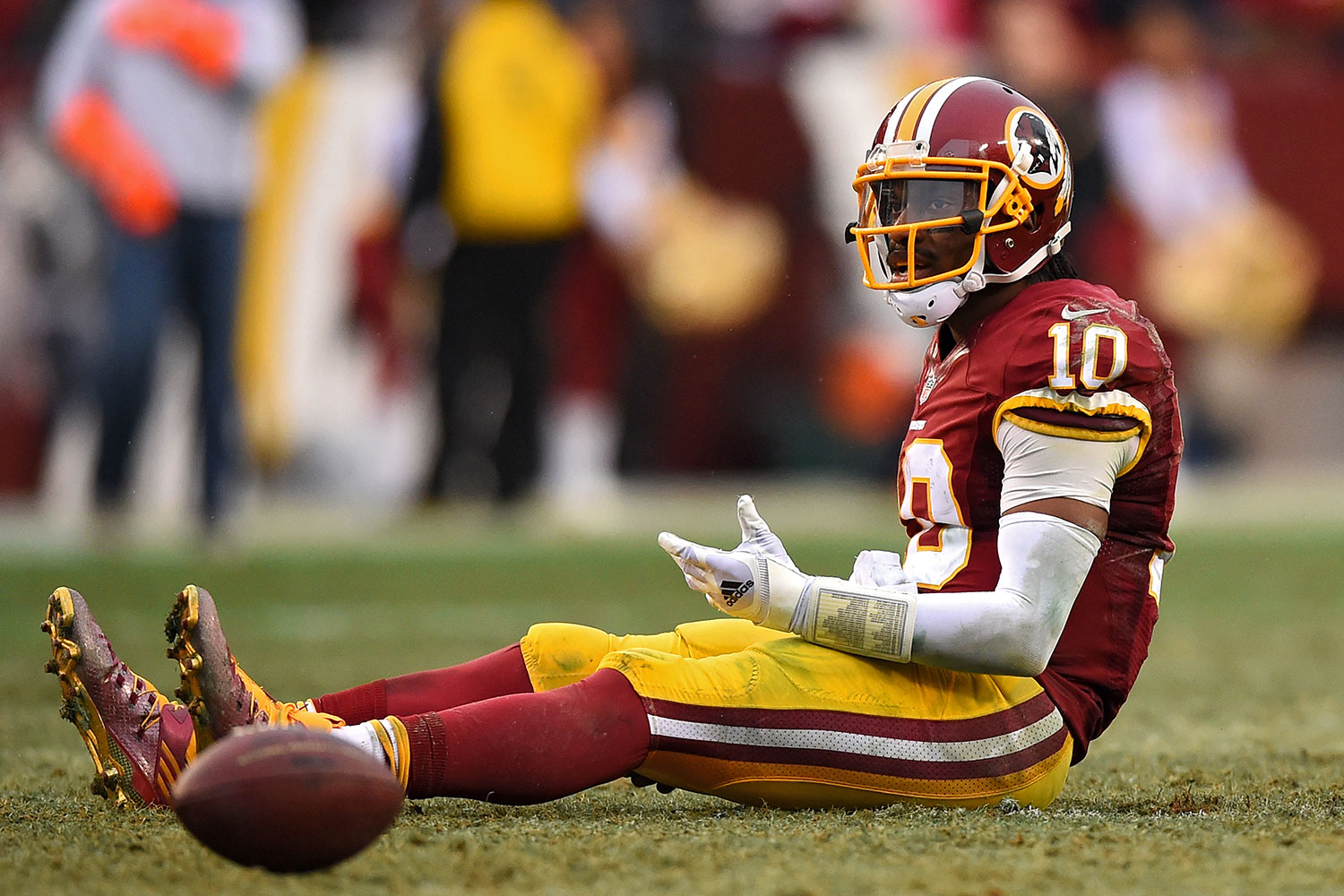 What now for Robert Griffin III? Does he even have a future in Washington? Will he ever start an NFL game again? Simon Clancy looks back on the play that changed it all and finds eerie similarities between Griffin’s story and that of the franchise’s most famous quarterback.

Sport is defined by moments, when the game and the players become one, when the complexities of that point in time converge and something magical happens, something that stays with you no matter what comes next. The NFL has had its fair share. The Catch. The Drive. The Music City Miracle. The Immaculate Reception. Others aren’t afforded a moniker. Often it’s simply the name of the player involved that conjures up the memories: David Tyree; Leon Lett; Lynn Swann; Scott Norwood. Moments, good and bad.

And then you come to Joe Theismann and Robert Griffin III. Two quarterbacks in the nation’s capital, separated by 27 years, 26 different starting signal-callers, nine head coaches and five new faces in the White House. Inextricably linked by moments – by career-defining injuries that continue to haunt a once-great franchise.

Theismann had his moment in Week 11 of the 1985 season. Giants at Redskins on Monday Night Football at RFK Stadium. First and 10 at midfield, tied at 7. The play called was a flea flicker, but there was no pass on this play. Only pain. From the snap of the ball to the break of the leg was less than five seconds.

Then an 11-year veteran originally drafted by the Miami Dolphins in 1971, Theismann’s football story began in the mid-sixties with the tiny South River High Rams of the New Jersey high-school system. He signed a letter of intent to go to South Carolina until an intervention from his head coach Ron Wojcicki changed his course. A playoff game against Sayreville in 1966 where Joe hit a streaking Drew Pearson – later of the Dallas Cowboys – to beat the Bombers prompted Wojcicki into action. He drove the film to a New Jersey football camp and Notre Dame head coach Ara Parseghian. The rest is history.

Parseghian persuaded Theismann to ditch Columbia for South Bend, an alert publicity staffer named Roger Valdiserri changed the pronunciation of his name from Theezeman to Thighsman to rhyme with Heisman and Joe had a glittering career for the Fighting Irish. But he never played a snap for Miami as contract negotiations with the Dolphins fell apart over a signing bonus. Instead, he went to Canada, leading the Toronto Argonauts to the Grey Cup in his first season before Washington obtained his rights.

Nearly 18 million people were watching Monday Night Football that evening in November 1985 as Theismann handed the ball to John Riggins, the fullback taking two steps forward before tossing it back to his quarterback. Harry Carson blitzed through the A-gap while Lawrence Taylor attacked off the edge. Carson disrupted the flow of the play, forcing Theismann to step to his left so that now he was within reach of the most fearsome pass rusher in NFL history. Taylor, having been blocked behind the QB, avoided Russ Grimm’s desperate lunge at his feet and launched himself. “I was thinking about keeping him in the pocket and squeezing him,” Taylor told reporters after the game. “Then I broke free.”

What actually broke free was Theismann’s shinbone from the rest of his skeleton. The sound of the leg shattering was clearly heard on both sidelines. “Like a gunshot,” Joe Jacoby would say later in the locker room. Taylor burst out of the pile he’d created with such violence, sickened. He held his head in disbelief and then screamed. Theismann’s shin was exposed, his blood covering the tangled bodies. “His leg was just hanging there. It was the ugliest thing I’d ever seen,” said Taylor. Joe Namath, from the safety of ABC’s commentary box, famously uttered the line: “I just hope it’s not his last play in football.”

After 163 games, Theismann’s career was over. No matter what had come before, what happened that night was the defining moment for the 36-year-old passer. Adored by the fanbase, beloved in the nation’s capital, a Super Bowl champion. Finished. 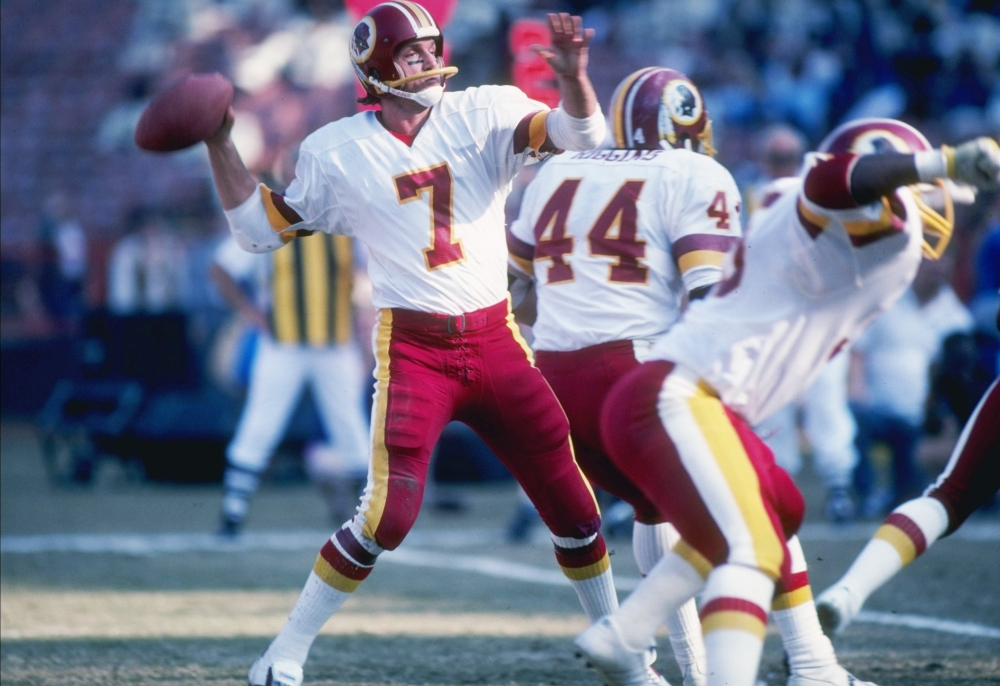 Fast forward 9,795 days – through a list of passers who followed Theismann ranging from Ed Rubbert to Cary Conklin to John Beck – to FedEx Field, some eight and a half miles along the District of Columbia highway from RFK Stadium. It’s Week 14 of the 2012 season and Washington trail Baltimore 28-20 with just 1:56 to go. They’re 6-6 and without a winning season in four years. But there’s a legitimate hope under centre, perhaps the first since Theismann almost three decades before. He is Heisman Trophy winner Robert Griffin III, the second overall selection in that year’s draft for whom Washington gave up three first-round picks. He is on his way to a winning Rookie of the Year and Washington are in contention for the playoffs. The season is on the line.

Griffin was born in Okinawa, Japan, the son of military parents who moved first to Fort Lewis in Tacoma, before settling in Copperas Cove, Texas. Long before he was known as a Roman numeral, Griffin would play for the local independent high school, the Bulldawgs. He was just Robby Griffin back then, only adopting Griffin III for his first game as a Baylor Bear in honour of his grandmother. He was an academic whizz as well as an athletic freak. His principal thought he would become President one day. He wasn’t far wrong; it just turns out he got the toughest job in Washington instead.

Some considered him a loner in school. He shunned fashions, his braided hair was a source of amusement in the hallways and his collection of socks drew raised eyebrows just about everywhere. He rejected offers from LSU and Oklahoma who wanted him to play cornerback for a chance to compete at quarterback for Art Briles at Baylor, just 70 miles from home up I-35. The Bears were no college powerhouse. They hadn’t won a Bowl game since 1992; heck, they hadn’t been in a Bowl since ‘95. But Griffin shook up the school and turned home games into the hottest ticket in town. As the team grew, so did his status. A local Waco TV anchorman started calling him RGIII and the legend was born.

Then in 2009 the wheels came off as the Bears’ new saviour tore his ACL against Northwestern State. In the aftermath a disturbing trait would appear, which manifests even today: RGIII got lazy. He started skipping school, becoming despondent over his injury and future. The lone wolf retreated inside himself.

The injury healed, though, and Griffin returned. He led Baylor to an Alamo Bowl victory and won the Heisman, rocking Superman socks to the ceremony at the Downtown Athletic Club. He was drafted by a quarterback-desperate team shorn of a reliable passer since Mark Rypien in 1991; a championship-winning one since Doug Williams in 1988; a great one since Theismann in 1985. 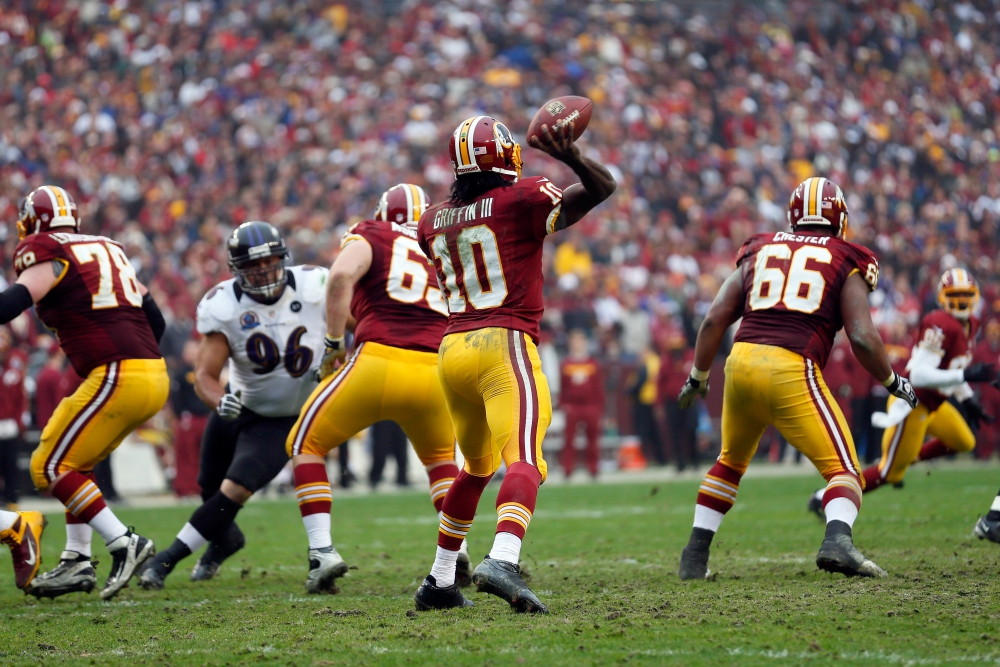 It was second-and-19 from the Washington 27-yard line and this was RGIII’s moment. There was no Terrell Suggs, no Ray Lewis on this day, but it was still a formidable Ravens defense. At the snap, linebacker Brendon Ayanbadejo blitzed through the A-gap and, just like Carson almost three decades before, was in the quarterback’s face in an instant. Griffin sidestepped the rush, eerily similar to the move Theismann made but, unlike Joe, he took off out of the pocket and headed upfield, avoiding strong safety Bernard Pollard at the 31 before cutting inside.

“As soon as I turned I was like, ‘Oh Lord here we go’,” he said in his press conference after the game. As he cut, Griffin slid to avoid defensive end Paul Kruger. But as he did so, his planted leg gave out and his trailing right leg flew up into the air just as 6ft 4ins, 356lb defensive tackle Haloti Ngata arrived.

Pollard knew something was wrong and immediately signalled to the bench. Washington hearts were in mouths. This was all too familiar. Griffin could barely put any weight on his injured leg and almost collapsed as he gripped the shoulder of the team trainer. In the same instant there was an audible groan from fans seeing a new angle of the hit on the big screen. Seconds later, as the CBS replay runs, the commentator lets out a cry on watching Griffin’s knee take the full impact of Ngata’s hit, his leg bending like an expensive golf club on impact with the ball. “I knew I needed to get out right then. I couldn’t go on.”

Incredibly, an MRI showed nothing more than a mild LCL sprain but he sat out the following game against Cleveland before returning wearing a knee brace to beat the Eagles. Yet two weeks later in the NFC wildcard game against Seattle, the knee buckled completely as he bent untouched to retrieve a botched snap, tearing both the already stressed LCL and rupturing the ACL he shredded at Baylor. Adored by the fanbase, beloved in the nation’s capital. Finished?

Griffin’s moment may not have been as dramatic as Theismann’s, but his career has never recovered. Twenty-six years, nine months and 25 days separated the hits, but two eras ended in DC because of them. Theismann was 36 and believed he had a few more good years left. He would have done anything to take one more snap. Griffin was 22 with his career in front of him. Suddenly without his mojo, he lost his way on the field, reinforcing concerns that the style of play he brought from college was not sustainable in the NFL. He reverted to the type that surprised so many when it appeared at Baylor, becoming lazy and aloof. Detractors claimed he was more interested in enhancing his brand than honing his talent. Hall of Fame passer Fran Tarkenton said that Griffin “came into the league with an arrogance”, that he “thought he was Jesus. This guy is out of control with his ego.”

There is a tragic symmetry to this story. Two high-school legends, college superstars, saviours of one city, hope-givers, name-changers. Joined together by two moments. But what of the future? Griffin’s is shrouded in doubt. Coach Jay Gruden is going with Kirk Cousins to start the 2015 season. RGIII seemingly wants to stay, to return to a time before that hit, just like Joe wanted to all those years ago.

And what of Theismann? Where does he stand on Griffin and how does he reflect on his own demise? “I’ve never fully recovered,” he told the Washington Times. “I tried to come back a year later. I showed up at Redskins Park and there were 13 doctors and a man from Lloyd’s of London Insurance there. I worked out for 10 minutes only to see they’d left. I jogged inside and said, ‘I’m not done yet’. They said, ‘Yes you are’ and that was it. I wanted it so badly but it was over. Does Robert want it badly enough? I question where he’s going to be mentally this season. That’s the big question.”

This is an edited version of an article that appeared in Issue XIII of Gridiron Magazine. To subscribe to the magazine, and enter the draw to win a trip to the AFC or NFC Championship Game, click here.