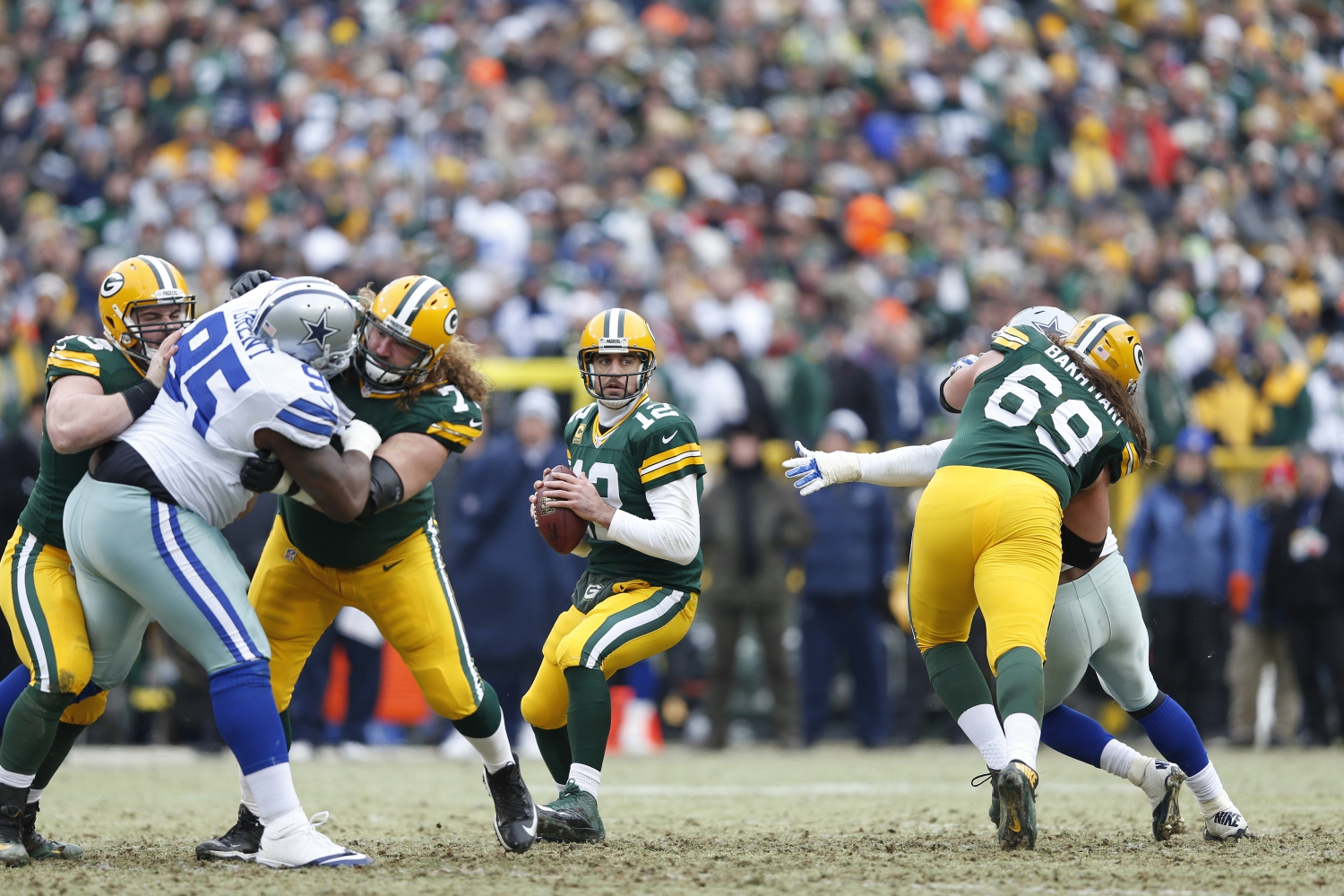 While the likes of Tom Brady, Peyton Manning and Aaron Rodgers can make the task of playing quarterback in the NFL appear relatively simple, the reality is very different. To better understand what an NFL quarterback goes through in a game – and to help aspiring young passers become better players in the UK – Gridiron have called on some of the league’s biggest stars to offer their own unique insight.

On being a leader on the field and in the huddle – Andrew Luck, Indianapolis Colts

I’ve heard a lot of people liken the quarterback position to a field general. You give the orders and you call the play in the huddle. So I think an underrated part of being a quarterback is being able to speak coherently and to maintain a cool, calm demeanour when the bullets are flying. You want to show confidence to everybody else that you know what’s going on even if you don’t. It’s a quarterback’s huddle – players will chip in but only while I’m getting the play from the sidelines into a speaker in my helmet. Players will talk about what happened on the previous play. Linemen might say to each other ‘My three technique is digging hard in the ground’; the receivers will be talking about the coverage and saying ‘they’re in Cover 2’ and the running back might be talking to the centre and saying ‘okay, when I point over there make sure you’ve got that guy’. So there’s a lot of chit-chat about what happened on the previous play. They will also talk about the situation in the game, whether it’s third and two or there are 50 seconds left. But once the quarterback steps into the huddle, calm ensues and no one else talks. I call the play – a typical play for us might be Trips Right 58 All Go – we break the huddle and get to the line.

To throw a spiral you need to have a good wrist flick and the ball needs to come off your index finger. Turn the wrist so your thumb comes from a ‘thumbs-up’ to a ‘thumbs-down’ position. Then avoid the big guys at the same time!

On improvising when a play breaks down – Ben Roethlisberger, Pittsburgh Steelers

The first thing is that you try not to get hit. I grew up playing in the backyard or in the school yard. That’s exactly what improvising is – it’s backyard football even though you are in the NFL. The biggest thing I tell people is that I don’t plan on doing it. We don’t break the huddle and then I say, ‘Okay, I’m going to run around and you guys get open’. The idea is to sit in the pocket, throw the ball and we’re all good. But sometimes it has to happen. The problem with me – if you can call it a problem – is that my competitiveness doesn’t let me just give up on a play and get tackled. You will see a lot of guys will go down real easy and I admit that often stops them from getting hurt. To me, that’s giving up on a play and I just cannot do it. But our coaches in Pittsburgh know we live by the sword and we die by the sword. You can’t teach backyard football – there is no way to practice and simulate what might happen in a game. It’s really about how good you are and if you have a sense of the game or not. Some guys have it and some guys don’t.

On mastering the mental side of the game – Sam Bradford, Philadelphia Eagles

You have to be in tune with the physical side of the game but more so with the mental side. If you understand your checks, your reads and where the ball is supposed to go, it just gives you an upper hand in succeeding and knowing what to do with the ball. You have to understand it is a process that takes time – mastering a playbook or a system is not something that comes overnight. There are going to be times when you are frustrated. There are growing pains to learning an offense – it takes time and it takes reps on the practice field. The more times you do something, the more comfortable you become with it.

On beating the blitz – Luck

There are multiple ways to beat a blitz. You can run away from it or slide the line into it and protect it. You can have hot reads where the quarterback gets the ball out of his hands quickly and to one of his receivers or you can let the guy come and get a positive chunk of yardage in the area he has vacated. Our offensive coordinator, Pep Hamilton, always says that a blitz is an opportunity for a big play for the offense because there are fewer defenders in coverage. If you can pick up the blitz, you have the chance to hit a big one. 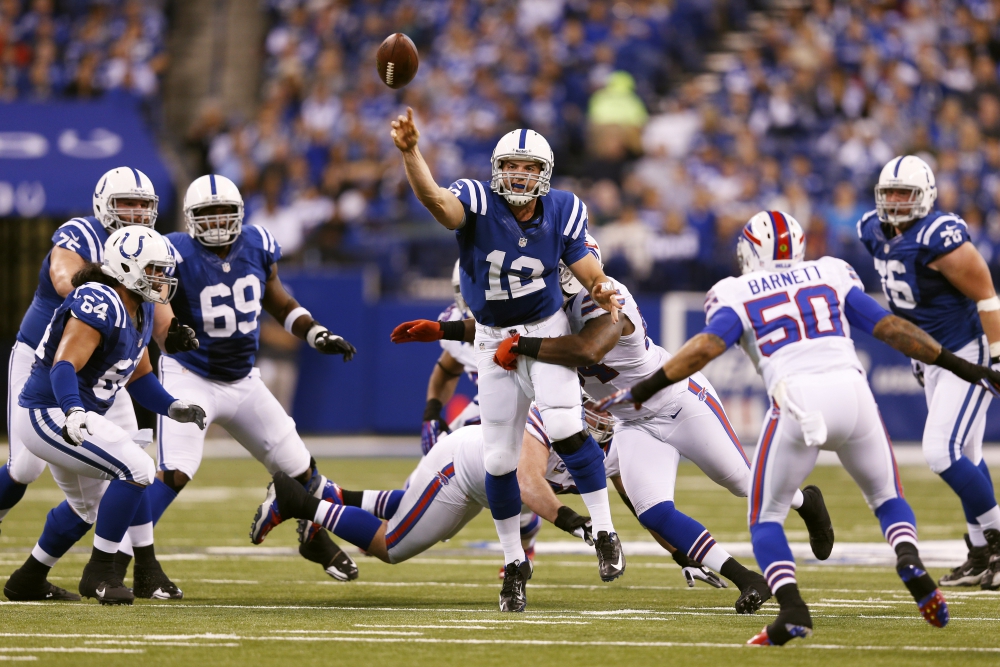 On working with your offensive coordinator –Roethlisberger

We get a stack of new plays each week. We will have roughly 210 plays in a gameplan. On Friday, I will sit down with the offensive coordinator and say ‘I hate this play, I hate that play’ and it’s out because you don’t want your quarterback running a play that he hates. That doesn’t make any sense. So we get those plays thrown out but not just when you look at them on paper. You have to go out and practice them first. Then you decide if they work or not. You have to communicate with your coach, in my case Todd Haley, because if you don’t you’re not giving your team the best possible chance to win. It’s more about throwing plays out than putting plays into the game plan.

I think there’s always part of you that feels like you need to prove something. There’s no place I’d rather be than leading my team-mates and running out of the tunnel in front of 70,000 fans. You don’t take it for granted – you really never know when your last day is going to be. What I can control is to be the best player I can be for this team, to be the best leader and to add value to this team. Once you stop doing that, this is a business and there’s not a need for someone who cannot produce at the level you’re expected to produce at. It’s my job to be out there producing. If I don’t do that, I’m sure they will find somebody else.

This is an edited version of an article that appeared in Issue I of Gridiron Magazine. To subscribe to the mag, and enter the draw to win a trip to the AFC or NFC Championship Game, click here.