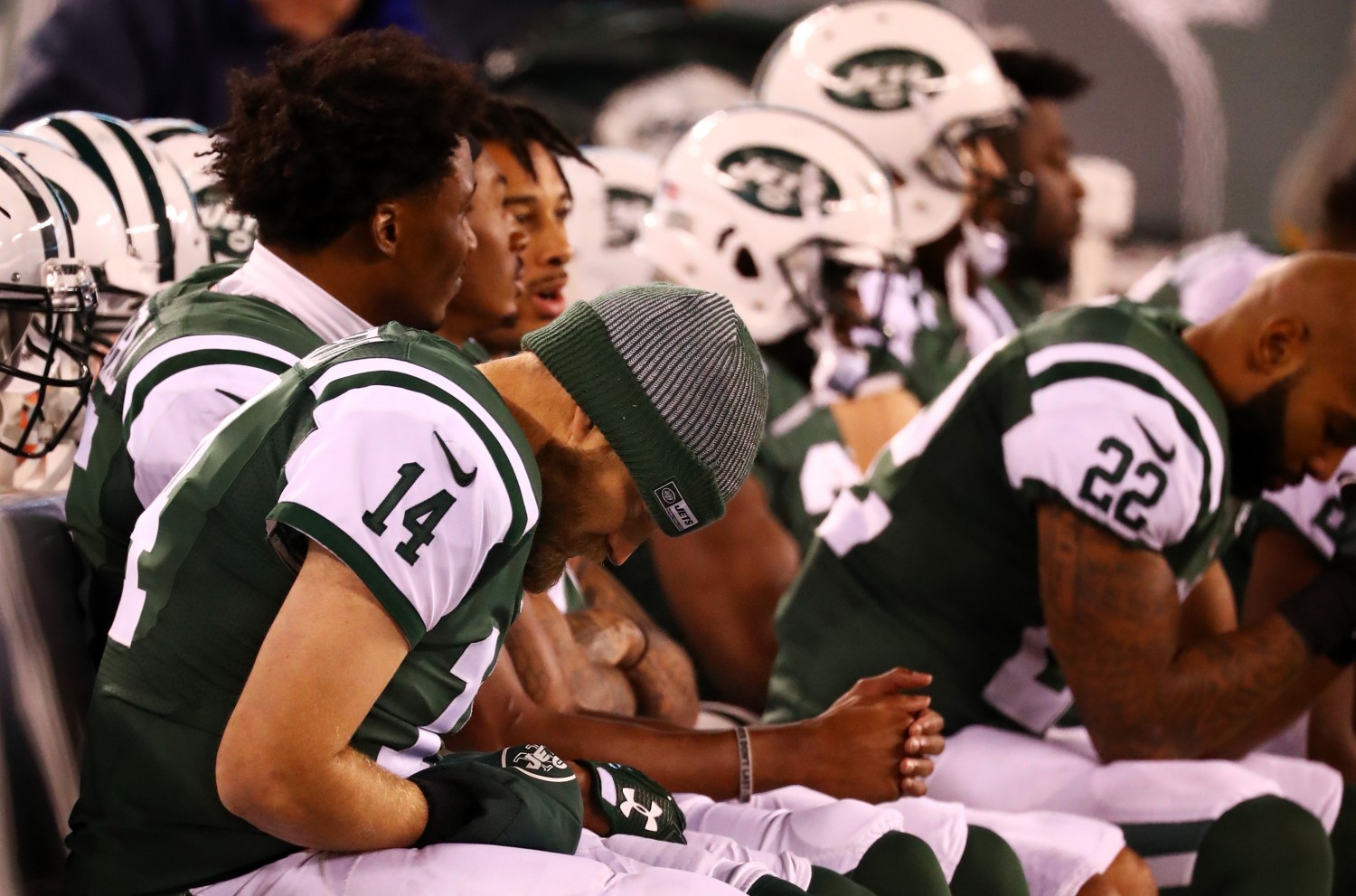 As the playoff picture begins to shape up, the Gridiron team’s Tuesday Morning Touchdown thoughts consider some of the haves and have-nots after Week 13…

Exactly four weeks before the most ruthless day of the year for NFL head coaches, the Jets – and HC Todd Bowles – were embarrassed on a national stage by the Colts.

Indy were 14-0 up before the Jets, who started with the ball, had even mustered a first down, and the team with the joint-fewest interceptions had doubled their total come the end of a 41-10 annihilation of Gang Green.

This game also proved New York’s problems run far deeper than their quarterback. Several of Bowles’ players appeared to show little heart in the midst of a campaign they have clearly written off and that, as a head coach, has to be the most worrying aspect. Even in Rex Ryan’s bleakest times in the Meadowlands, his players would summon spirit from somewhere when the chips were down.

That Bowles’ current group cannot, or, more pertinently, will not, do so should have the Jets’ current head coach sweating. One year after a 10-win season, the HC has to be very much fighting for his job. The final four weeks should be an audition and Bowles has to find a way to rally his uninterested troops, or he faces stepping off the NFL coaching carousel sooner than he – or anyone else – would have expected. (Liam Blackburn)

The Fisher price is wrong!

The most Ram thing of all Ram things happened this week when Jeff Fisher was handed a contract extension in a week when he praised New England running backs Brandon Bolden and Danny Woodhead for their outstanding work out of the backfield this year.

The Bolden point in itself is ridiculous; the guy has played just 13 snaps as a RB this season and is largely a special-teamer. But at least he actually plays for the Patriots, unlike Woodhead, who has been with the San Diego Chargers since 2013!

As if that wasn’t bad enough, the Rams fell to a predictable, comfortable beating at the hands of New England to fall to 4-8 after a 3-1 start. Oh well, Jeff; at least you’ve kicked that ‘7-9 bullsh**’ to the kerb. You definitely won’t have seven wins this year… (Matt Sherry) 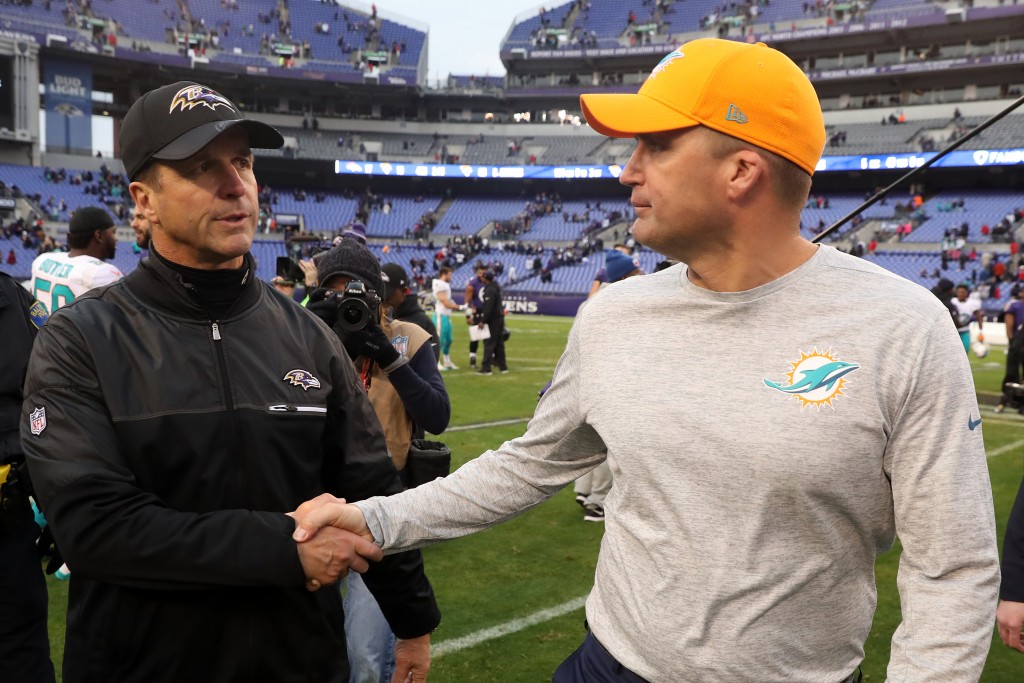 We’ll be watching the reaction of Miami head coach Adam Gase with interest following the Dolphins’ pathetic 38-6 defeat in Baltimore.

In what was the biggest game for the boys from South Beach in many years, Gase’s resurgent crew laid an egg to bring a six-game win streak to a shuddering halt and end suggestions that the AFC East race was on. The performance illustrated a lack of mental toughness that Gase needs to rid the franchise of ASAP, and we’d expect a head coach who’s impressed mightily in his first crack at the job to do just that.

The Dolphins are still very much in the playoff hunt, so the rookie HC’s response to this body blow is worth watching. (Matt Sherry)

Turning popular early season belief on its head, the Tampa Bay Buccaneers might just be a playoff team.

A four-game unbeaten run, and six wins from their past eight, have taken the Bucs into a share of top spot in the NFC South, aided by Atlanta’s unfortunate reverse on a ‘pick two’ against Kansas City, and these two appear destined to go head-to-head for the one guaranteed post-season spot, with both New Orleans and Carolina also going down at the weekend.

Tampa’s bid will hinge on a four-game slate that includes three divisional match-ups (although, ironically, not one against the Falcons) sandwiching a trip to the league-leading Cowboys. That game, no doubt to the chagrin of wider football fans, has already been flexed into prime-time, underlining the Bucs’ rise to prominence in the playoff picture, although the team’s progress rests more heavily on how they deal with the Saints and Panthers.

The Bucs still need to overcome the sort of brain-fart that cost them six points on the road against the Chargers on Sunday but, with Jameis Winston finding a connection of late with both Mike Evans and Cam Brate, and Doug Martin back in harness, there’s no reason why they can’t hold on to at least the wild card spot they sailed into after Washington’s L in the desert. (Craig Llewellyn) 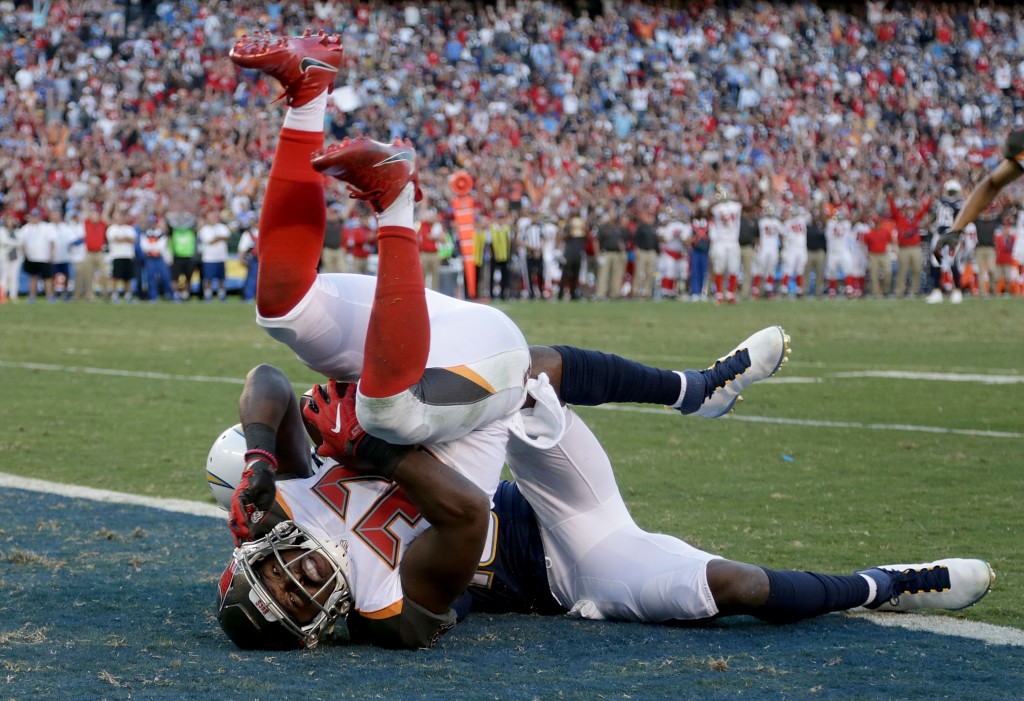 It was nice to see a ‘snow game’ or two in the NFL this past weekend, even if neither was on the scale of the Eagles-Lions white-out from a few seasons back. Lambeau Field took on a vestige of white during the Packer match-up with Houston, and Soldier Field tried hard to follow suit but, as in all matters Green Bay and Chicago this season, came off a soggy second best.

Of course, there were those who didn’t welcome the embrace of winter, notably three of the five quarterbacks on display. Still without a running game to back him up, Packers’ Aaron Rodgers managed to get a good grip on the conditions – and the ball – as he went 20-of-30 for 209 yards and two TDs, despite playing with a dodgy hamstring and fumbling one snap when poised to add to Green Bay’s advantage. Unsuprisingly, under-fire Texan Brock Osweiler failed to matched Rodgers’ prowess even if his numbers suggested otherwise as the Houston offense stumbled on.

Over in the Windy (and sleety) City, Bears third-stringer Matt Barkley was happy to hand off to Jordan Howard, whose hat-trick downed the 49ers, but Chicago’s struggles were nothing compared to their west coast rivals, who benched Colin Kaepernick after he went 1-of-5 for just four yards through three quarters. Blaine Gabbert fared little better in his limited time under centre, but the game was already over as the Niners trailed by 22 at that point.

Chicago’s win leaves San Fran effectively looking at the second choice in next year’s Draft but, with Oregon University’s head coaching role still vacant, will Chip Kelly be around to take his pick of a supposedly poor QB crop? (Craig Llewellyn)

Amid the controversy over who should have made the third College Football Playoff, it was nice to see the majority of the principal Heisman Trophy candidates represent institutions that missed out on the final four.

Alabama (naturally), Clemson, Ohio State and Washington remained the playoff selection committee’s quartet of choice, their order only rejigged slightly after the final week of conference championship games, leaving title winners Penn State and Oklahoma on the outside looking in, respectively lamenting a second loss and/or head-to-head outcomes as their silverware ultimately meant little.

The latter at least has a couple of candidates for college football’s biggest individual prize to cheer, however, with both QB Baker Mayfield and favourite target Dede Westbrook named amongst the five Heisman contenders. Only Clemson quarterback Deshaun Watson has both a playoff spot and Heisman evening to look forward to, with Louisville quarterback Lamar Jackson and Michigan linebacker Jabrill Peppers completing the quintet anticipating an appearance on the Downtown Athletic Club stage this Saturday.

It’s the biggest group of candidates invited to NYC by the Heisman Trust in three years and doesn’t even include potential contenders JT Barrett (OSU) and Christian McCaffery (Stanford). Jackson’s bid appeared to have faltered along with Louisville’s playoff form down the stretch, but he remains the nominal favourite, even though the popular vote would probably make the incredibly versatile Peppers only the second defensive winner after fellow Wolverine Charles Woodson.

Should either Jackson or Mayfield by chosen by the Heisman alumni, however, the NFL will have to wait at least twelve months to see their skills in the pro game, but at least it gives both another chance to get on the good side of the playoff selection committee! (Craig Llewellyn)

It’s a close call between Oakland and their division rival Chiefs, but we give Kansas City the edge after their win at the Black Hole earlier this year. Thursday night will be huge!

We’ve been high on the Chiefs for much of the season, a theme that will continue if Kansas City keeps racking up outstanding wins like the one at Atlanta on Sunday.

Sometimes good teams have bad games especially against good teams, as Seattle found at Tampa Bay. The key is to bounce back, and a 40-7 shellacking of Carolina fits the bill.

New England’s last three games have resembled a mini-preseason, with coaches experimenting on defense. The unit has looked better every game, but the Ravens should prove a better test on Monday night.

What more can you say? The Cowboys are finding different ways to get the job done, which is the hallmark of a great team. It’s Dallas, and yet we’re not – like usual – awaiting the calamity around the corner.