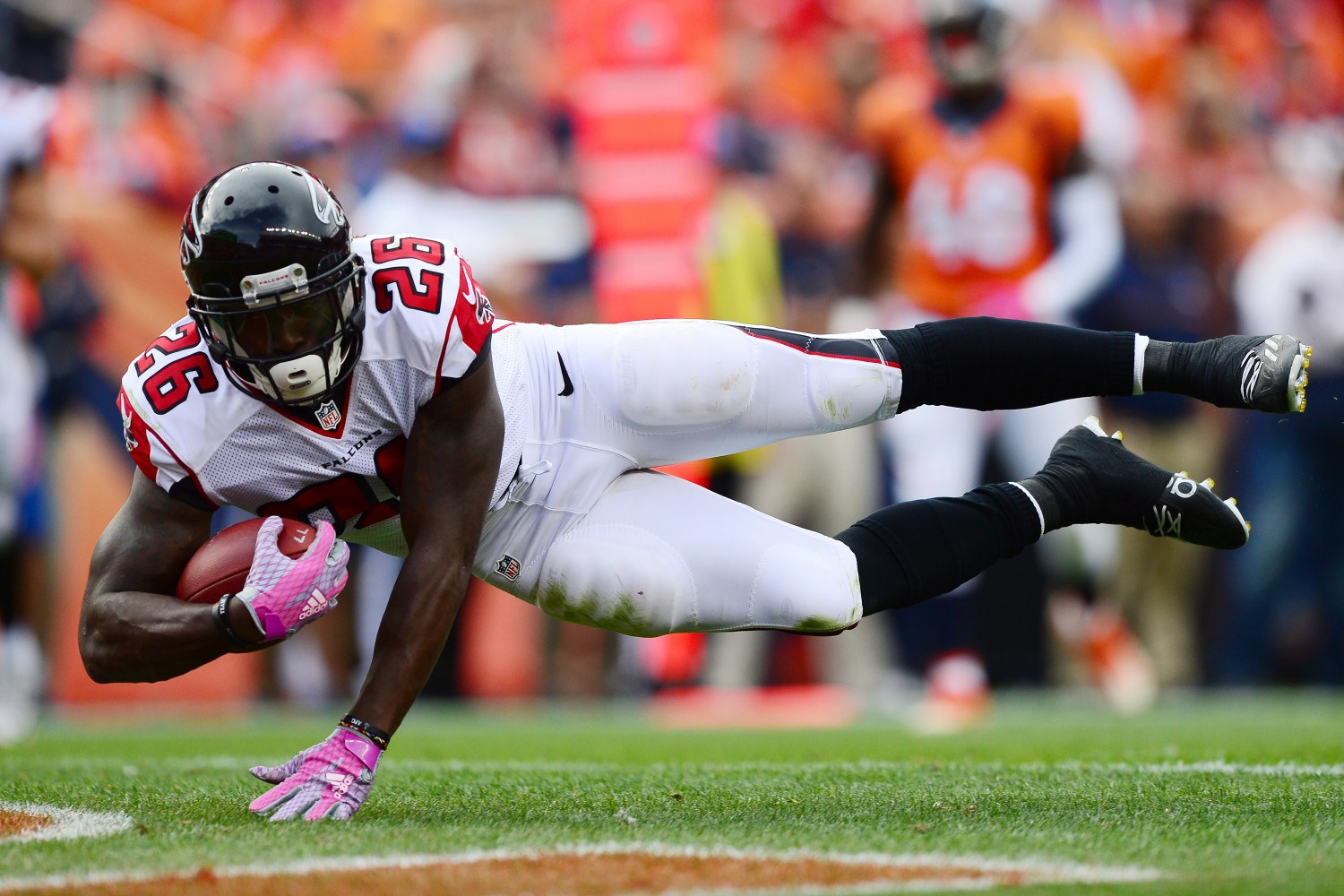 While Tom Brady’s return to action took centre stage in week five, there were plenty of other NFL happenings to give the Gridiron crew something to talk about in Tuesday Morning Touchdown.

A bit like Leicester City’s title-winning challenge in the Premier League last year, everyone was waiting for the Atlanta Falcons offense to be found out.

“The wheels will come off when they face a decent defense,” they said. Surely against the Denver Broncos, the Super Bowl champions, a defense that then-Bronco Malik Jackson told me after the win over Carolina was as good at the ’85 Bears and has been brilliant in their four wins so far this season. Safe to say, however, that, after deconstruction of that same D, the Falcons offense is legit and the team is a serious contender.

Even with receiving yard leader Julio Jones double-teamed and kept quiet all afternoon, Kyle Shanahan found ways to keep the ball moving and get running back duo Devonta Freeman and Tevin Coleman the ball. The latter made hay after being mismatched against linebackers in the passing game and torching them (and DBs) with raw pace and great hands – a devastating combination. Coleman and Freeman have been outstanding so far this season, combining already for over 1000 yards from scrimmage across the first five games. The offensive line is improving game-by-game and simply dominated the Broncos on Sunday. QB Matt Ryan has cut down his errors and, with the addition of veteran Mohamed Sanu and rookie tight end Austin Hooper, now has multiple options offensively.

All Atlanta needs now is that fabled pass rush – oh wait a second… Considered by many as a rookie bust, second year DE Vic Beasley had a breakout game in Mile High with 3.5 sacks, multiple hits, two forced fumbles and constant pressure.

Whatever else may be said, the Falcons are now the dominant force in the NFC South and the most exciting offense to watch in the NFL. (Olly Hunter)

Pre-game drum beat and Sam Mills’ inspirational motto notwithstanding, the only pounding in Charlotte this morning is the hangover from their Super Bowl 50 appearance as the Panthers continue to stumble in defence of their NFC conference title.

Despite Greg Olsen having a 181yd career day, without Cam Newton, Carolina were a shadow of their usual selves as they allowed South division rivals Tampa Bay to escape with victory in another disappointing national television offering from the NFL. Panther penalties and turnovers contrived not only to keep the Buccaneers in the game, but allowed wayward rookie kicker Roberto Aguayo to win it with a last-second field that even head coach Dirk Koetter must have doubted.

In truth, neither side was particularly watchable, with the Bucs also missing key figures on both sides of the ball, but, while Newton stand-in Derek Anderson won the QB production battle against Jameis Winston, he also committed the turnovers that prevented the Panthers from pulling away, including a pick for Brent Grimes with the home side at first-and-one on the Buccaneers’ goal-line. Anderson wasn’t responsible for the seven penalties called on Carolina, however, including the Kony Ealy facemask that moved Aguayo into more comfortable territory with time running out.

Cam’s return from the NFL’s concussion protocol can’t come soon enough for the Panthers, but even he may not be able to save the team from itself as Atlanta opens up a three-game lead in division. Only a handful of Super Bowl participants have won one or fewer games to start the following season. The last? The 2004 Carolina Panthers… (Craig Llewellyn) 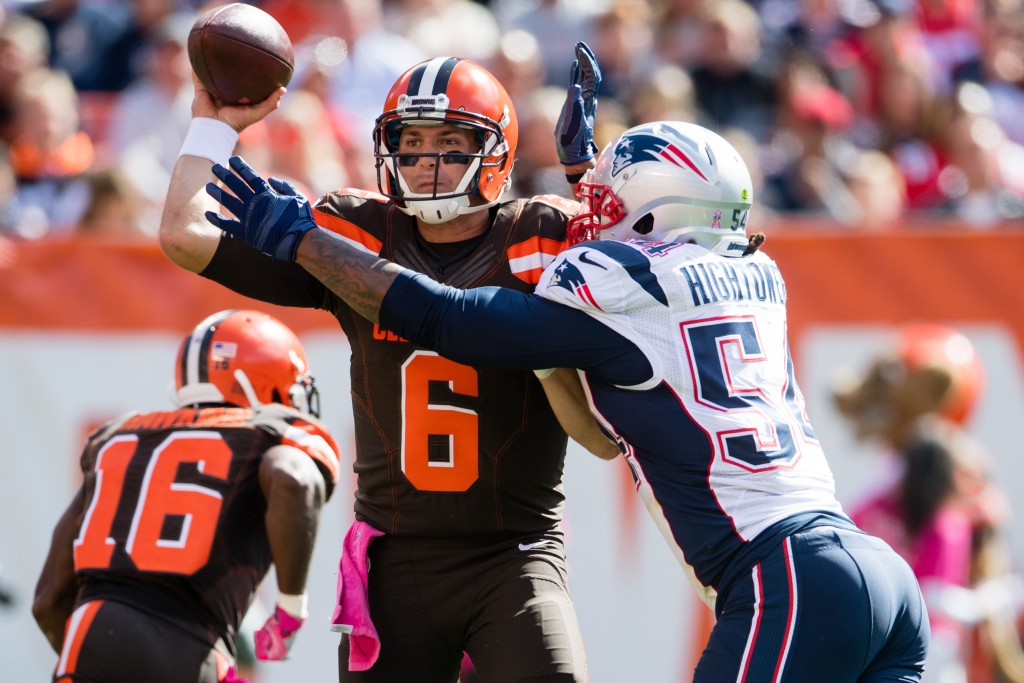 Is there a QB in the house?

To paraphrase the great Oscar Wilde, ‘to lose one quarterback, Mr. Jackson, may be regarded as a misfortune; to lose both looks like carelessness”.

Not for the first time this season, Cleveland’s inability to keep its QBs upright could soon have the franchise putting out tannoy calls for replacements from the stands, as both rookie Cody Kessler and veteran Charlie Whitehurst took turns to exit injured from the week five encounter with New England.

Having started the season with the notoriously-fragile Robert Griffin III under center, before quickly having to cover his week two absence with the harder-but-oft-injured Josh McCown, the Browns were forced into a third change by week three, turning to Kessler for the trip to Miami. The rookie fared better than anticipated in two appearances, but left the Patriots game early in the second quarter with an unspecified chest injury, bringing Whitehurst into play before he too was briefly sidelined in its final throes.

While ‘Clipboard Jesus’ was able to rise from the trainer’s bench in time to take a game-ending knee, might Cleveland be even more grateful for taking a flier on Terrelle Pryor, who has not looked out of place in any of the roles yet forced upon him… (Craig Llewellyn)

Changing of the guard

OK, the guard position isn’t what I’m talking about this week but instead the days being numbered for a pair of quarterbacks who, this time last year, were long established starters for their respective teams.

Let’s start in Chicago, where Jay Cutler wasn’t even suited up for the Bears’ defeat at the Colts. Cutler, who’s been at the team since 2009, injured his thumb in week one, suffered a recurrence in week two and seems to have lost the faith of head coach John Fox given his growing tendency to turn the ball over and Brian Hoyer’s greater security – zero interceptions in three starts and just one lost fumble. So, for the player that signed a seven-year $126.7m contract in 2014 and who’s guarantee runs out this year, the Bears look even more likely to part ways with the 33-year old Cutler in 2017 and turn to the draft for their next franchise man under center.

Where Jay Cutler didn’t ever live up to the salary and expectations, Dallas Cowboys QB Tony Romo has had a stellar career despite only winning two out of six playoff games. Romo has suffered a litany of injuries over recent seasons, with a torn shoulder, broken clavicles and collar bones in the last three years, and, most recently, a fractured vertebrae sustained in pre-season which has left him out until at least week eight. In his place came fourth round pick Dak Prescott, who has grown week-to-week and led the Cowboys (with the help of the excellent Ezekiel Elliott) to a surprising 4-1 record.

Romo may come back in when he’s finally fit (and who really knows when that will be) but, given his recent injury record, it might not be long before Prescott reclaims the starting spot and, barring a massive drop off, he – and not Romo – will be the future of this Cowboys organisation. (Olly Hunter)

The victory that all NFL UK fans, apart from those with a Windy City affiliation, should have celebrated on Sunday was the Indianapolis Colts’ narrow 29-23 success over the Chicago Bears.

Andrew Luck and Company were the first team to forgo a bye week immediately after a London game and there will have been interest in how they fared in the corridors of power. It has been accepted by those with an International Series interest that, should more games arrive on these shores, the traditional post-match bye week may have to be reconsidered given the constraints of the schedule. So thank Adam Vinatieri’s right boot for proving that it is possible to overcome the jet lag within a week; it may just be a significant result for the future of London games. (Liam Blackburn) 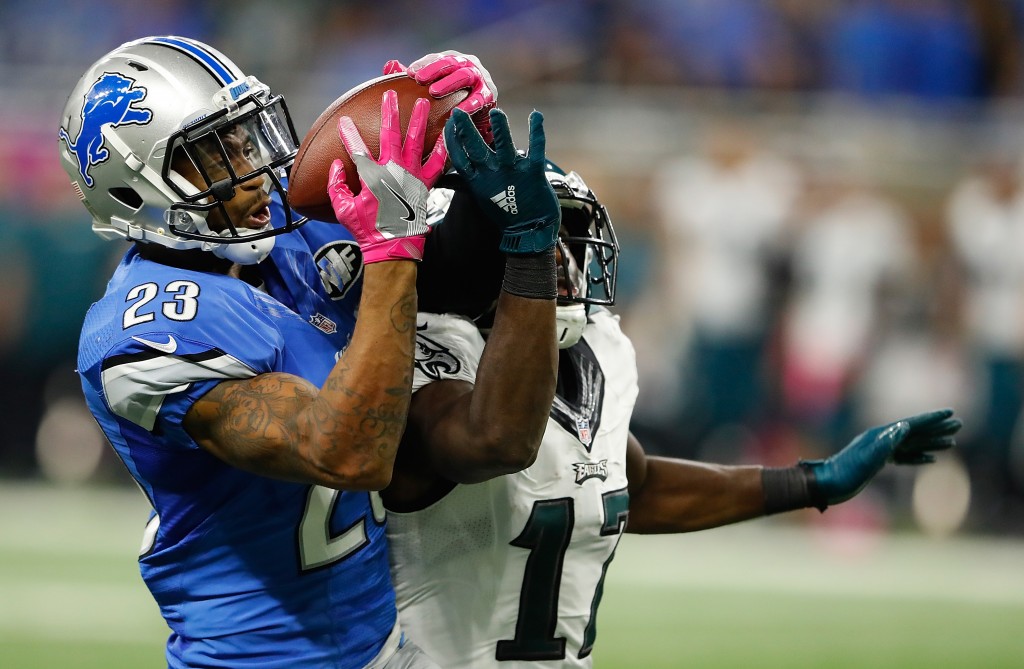 Philadelphia’s hopes of maintaining its unbeaten run after an early bye week foundered on back-to-back turnovers at Ford Field as the man known as ‘Big Play’ produced two in a row to guide the Detroit Lions to another rare win against expectation.

Just as they had when downing NFC North rivals Green Bay in each of the previous seasons, the Lions dug deep to upset a likely playoff contender, with Darius Slay paying off a chunk of his four-year $50.2m contract extension in the space of two-and-a-half fourth quarter minutes to single-handedly derail the Eagles’ bid for 4-0.

Slay was the biggest deal of Detroit’s off-season, despite being largely overlooked amid bigger stories elsewhere. He guaranteed his share of the week five headlines, however, first by forcing a Ryan Matthews fumble that the Lions turned into a field goal to regain control of a game they once led 21-7, and then making previously-unpicked QB Carson Wentz pay for to an unnecessarily-hopeful heave to Nelson Agholor with over a minute still on the clock. The Lions ran out 24-23 winners to move to 2-3 for the year.

The result may not alter either team’s season in the long-run, but an upset here and there never goes amiss. (Craig Llewellyn)

The Super Bowl champs could really do with Trevor Siemian back for their tilt with a San Diego team that is much better than the records suggest on Thursday. Who’d have thought we’d say that?

They say absence makes the heart grow fonder and, coming off a bye, Seattle make the leap into our illustrious list.

I guess we can put that egg laid in Philadelphia down as a one-off. The Steelers are loaded and their Week 7 game at home to New England will be amaze-balls.

Tom Brady’s back which, combined with a defense giving up just 14.8 points per game, spells big trouble for the rest of the NFL.

The only unbeaten team remaining in the NFL, having beaten five teams with at least two wins. Need we say any more?