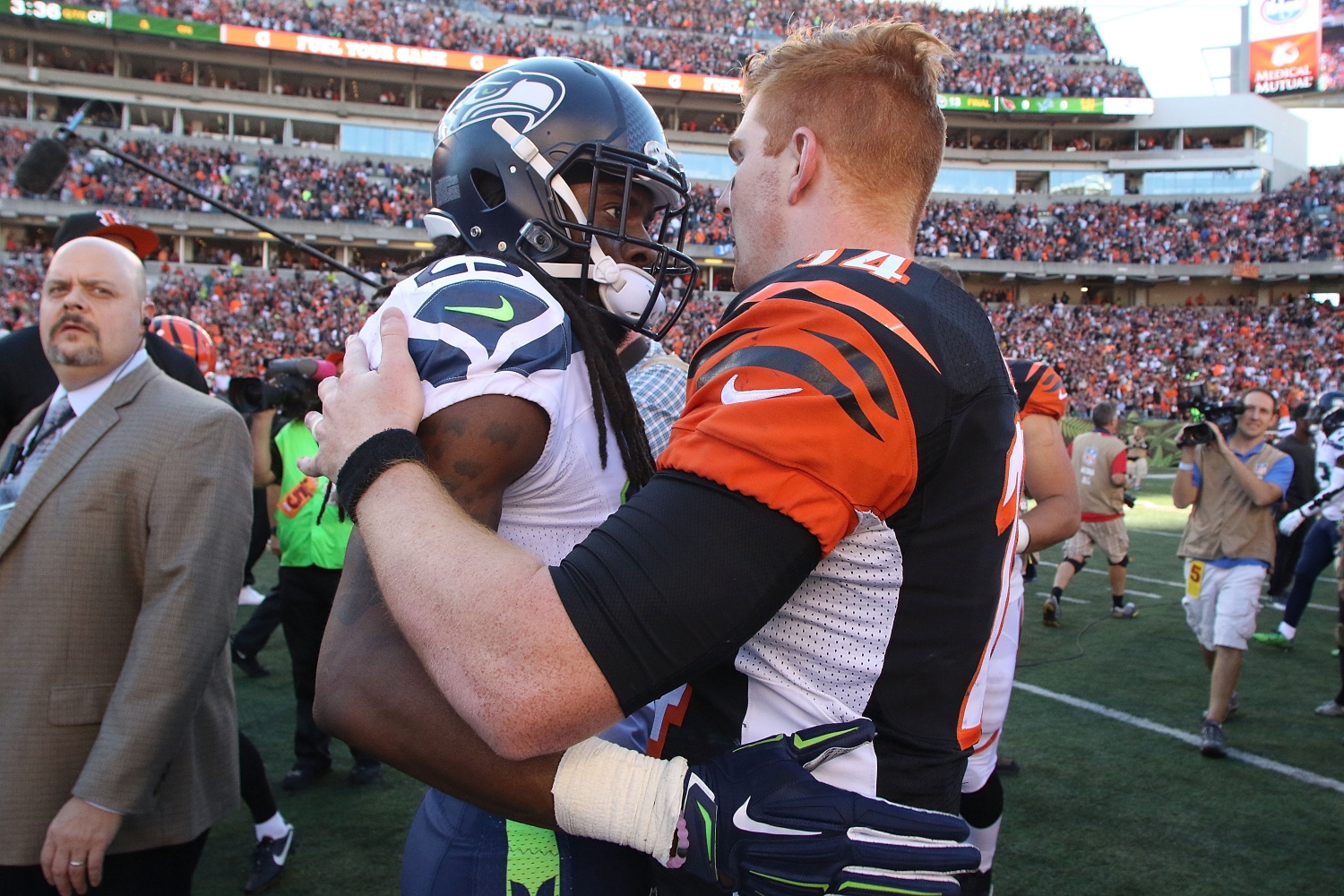 One of the most exciting weeks in NFL history set pulses racing as games went down to the wire all over the USA. Gridiron editor Matthew Sherry looks back on the madness and ahead to Week 6.

It’s official! The Red Rifle is legit. That’s the only takeaway you can have from the Cincinnati Bengals’ 27-24 overtime win over the Seattle Seahawks, easily the most important victory of Andy Dalton’s career. Down 24-7 entering the fourth quarter, it appeared the Bengals had no chance of moving to 5-0 for the first time since 1988. Yet that was before Dalton spectacularly took over the game, driving down the field on the Seattle Seahawks’ vaunted defense four times in five drives. He threw a touchdown pass to Tyler Eifert, ran in a score and set up two field goals either side of regulation time. Dalton’s final stat line read: 30/44, 331 yards, two touchdowns and an interception. We still need to see the signal-caller – who’s yet to throw a touchdown pass in four playoff games – deliver the goods in the post-season but, based on his efforts in the big moments this year, he’s ready.

Hawks All At Sea

I spent most of my time during the third quarter of that Seattle-Cincy game writing 200 words lauding the Seahawks’ ability to rise up in the biggest games. And then Andy happened. Pete Carroll’s squad are difficult to judge in 2015, although it’s fair to say they aren’t as good as recent years. It’s a miracle Russell Wilson hasn’t suffered a serious injury yet given the beating he has taken, and that’s just the tip of the iceberg when it comes to their problems on offense. Seattle are unable to protect Wilson, who’s now been sacked a league-high 22 times in five games, and their wide receivers are incapable of getting open with regularity. That’s not a good combination, especially when your defense gives up 20 points in just over a quarter of play. The good news for the 12s is your team is 2-3 when they should be 1-4 and finished. The bad is that the unbeaten Carolina Panthers are up next and there are still two games against the Arizona Cardinals on the schedule. 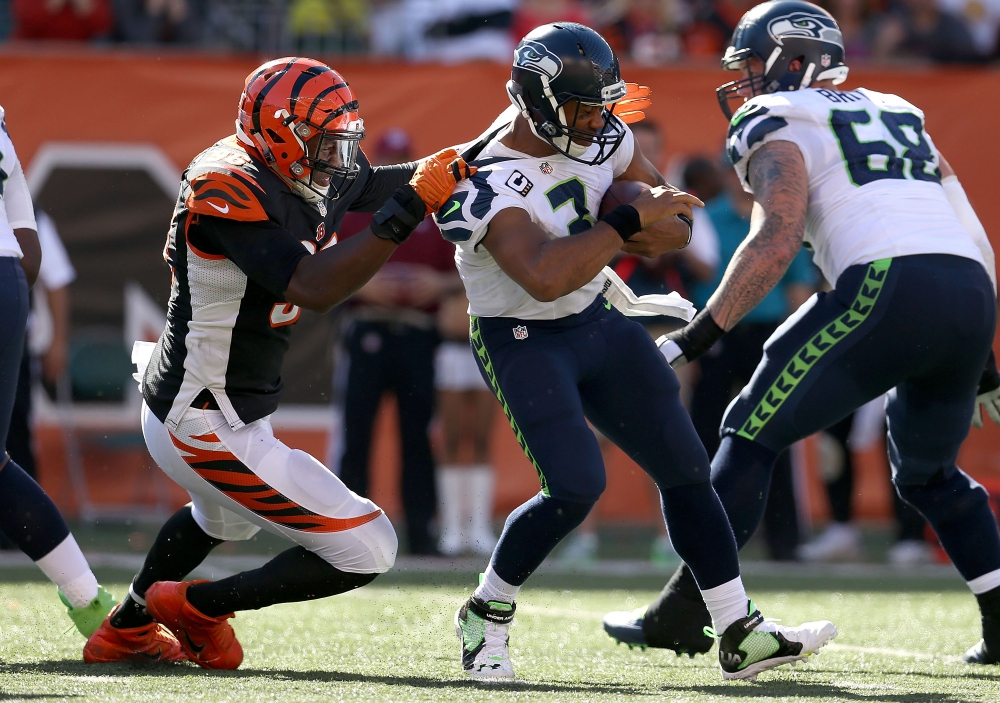 One team who headed into the Week 5 fixtures in a seemingly false position was the Kansas City Chiefs. They were 1-3, but had lost each of those games to unbeaten outfits. It was easy to forget, too, that their defeat against the Denver Broncos only came about due to a ridiculous meltdown towards the end of the game. As such, I think everybody expected them to overcome the Chicago Bears, move to 2-3 and begin a season-restoring run. That was until star running back Jamaal Charles suffered a devastating injury. Charles, whose yards-per-carry average of 5.5 is an all-time NFL record among those who have rushed 1,000 times or more, suffered a second torn ACL of his career.

Not only is that a blow to us Brits who were looking forward to seeing one of the game’s most electrifying players on these shores, it’s a monumental disappointment for the Chiefs. Charles, quite frankly, is their offense. He’s the focal point, the man everything runs through and, given Alex Smith’s limitations when it comes to throwing downfield, the most important player in Kansas City red. Want proof? Points scored with Charles healthy at Arrowhead Stadium on Sunday: 17. Points scored following his injury: 0.

If the Miami Dolphins, and potentially some other teams, really are fluttering their eyelashes at Sean Payton, they may be in luck. The season already looks lost for the New Orleans Saints, and I wouldn’t be surprised if there was an entirely new regime in place in the Big Easy come next season. Payton has done an amazing job there and remains an outstanding coach, but everything feels a little stale at the moment. New Orleans, put simply, are no fun to watch anymore. Payton seems frustrated by it, illustrated by him spending large parts of every game engaged in public arguments with defensive coordinator Rob Ryan. It’s clear that a fresh start could be good for all parties, especially if a team’s willing to throw a high draft pick the Saints’ way to get their man. 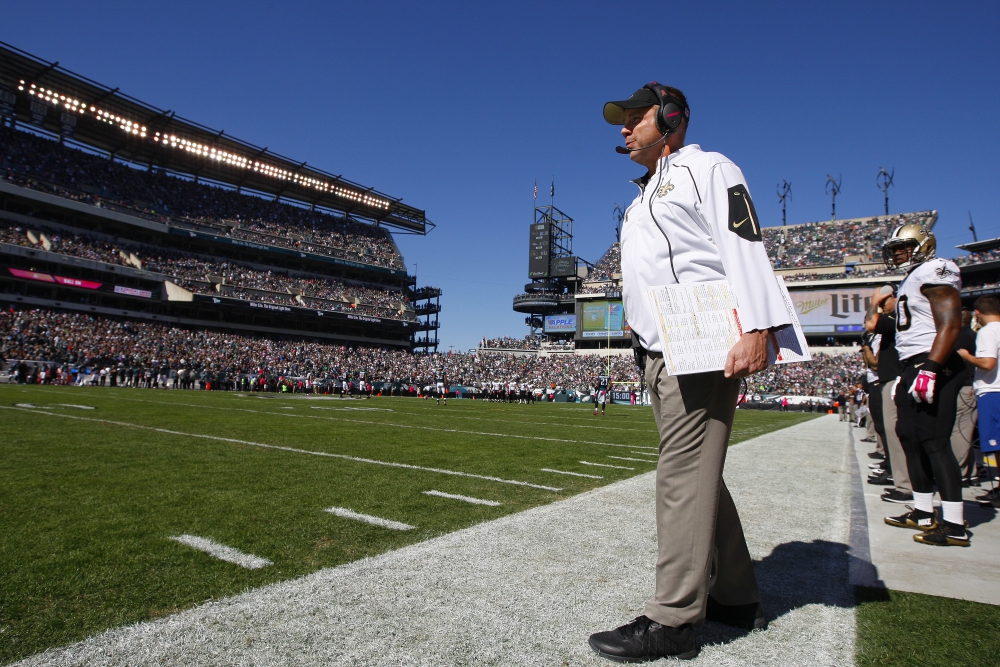 The Gridiron Team have been having a little debate this week over which unbeaten team will fall first, and who will retain their perfect record the longest. The general consensus is that the Carolina Panthers’ 0 will go before the rest, against Seattle this week, and the New England Patriots will last the course. The other question we’re asking is, ‘Which unbeaten team is the biggest fraud?’ To me, the answer is simple: the Denver Broncos.

The combined record of the teams Denver has beaten is 6-18. In each of their five games, except against the winless Detroit Lions, Gary Kubiak’s squad have been pushed all the way. The Broncos’ offense is playing awful, so much so that Peyton Manning has thrown more picks than touchdown passes. The other side of the ball is fantastic, papering over the cracks by playing dominant, scoring defense. That, though, is not a sustainable way to win games and it’s surely a matter of time before Manning’s obvious limitations take their toll.

There was much conjecture and suspicion surrounding the New England Patriots in the off-season. From Deflategate to the ESPN story of widespread cheating rumours. Yet it all ignored the main reason they’re so often better than the rest: the emphasis they place upon every position on the roster. The Patriots do a better job than any team in the league at finding hidden gems (see Butler, Malcolm). This was perfectly illustrated in the 30-6 win over the Dallas Cowboys as Dion Lewis, under-the-radar free-agency recruit Jabaal Sheard and Brandon King, a special teamer added to the 53 on Saturday, starred.

Lewis spent the last two years out of football. He’s still only 25 years old, yet looked to be done having been released by the Indianapolis Colts just seven days after they signed him last year. In New England, he looks like one of the most dangerous running backs in the NFL. Nobody understands his value better than Bill Belichick, with Lewis penning a two-year extension earlier this week. The maximum value of his three-year contract? $3.5million. A hat tip, too, should go to Patriots personnel lackey, and former NFL Network pundit, Michael Lombardi. He had Lewis and Sheard in Cleveland, and both are now shining for the Super Bowl champions. The latter, who managed two sacks last year, has four in as many games for New England. 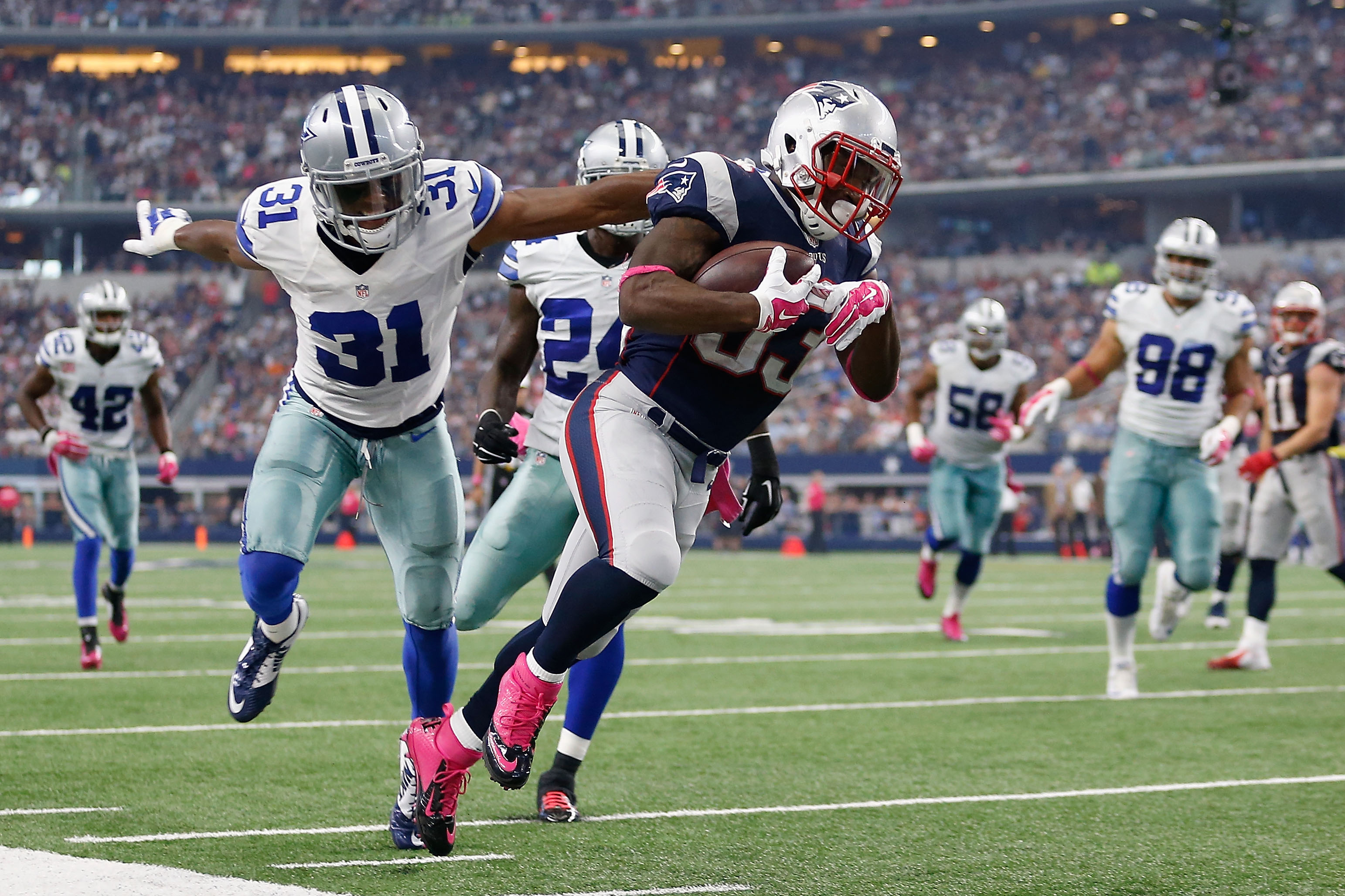 The main reason I love the NFL is that even games which appear completely uninspiring on paper can be humdingers. That was certainly the case on Sunday as the Jacksonville Jaguars and Tampa Bay Buccaneers traded touchdowns in a Florida Bowl to remember. Perhaps a 69-point thriller was what we should have expected in a meeting of the highest-drafted quarterbacks in 2014 and ’15. It was the latter, Jameis Winston, who came out on top, but there are good signs from both. Blake Botles, despite the odd boneheaded interception, looks much better this campaign and is clearly building a lethal rapport with the Allens (Robinson and Hurns), while Winston has looked pretty solid since that dreadful debut. He’s now 2-3 as an NFL starter, with the arrow pointing up.